Welcome to this week’s edition of “World Out Of Whack” where every Wednesday we take time out of our day to laugh, poke fun at and present to you absurdity in global financial markets in all its glorious insanity.

While we enjoy a good laugh, the truth is that the first step to protecting ourselves from losses is to protect ourselves from ignorance. Think of the “World Out Of Whack” as your double thick armour plated side impact protection system in a financial world littered with drunk drivers.

Selfishly we also know that the biggest (and often the fastest) returns come from asymmetric market moves. But, in order to identify these moves we must first identify where they live.

Occasionally we find opportunities where we can buy (or sell) assets for mere cents on the dollar – because, after all, we are capitalists.

In this week’s edition of the WOW: 5 head scratchers

Today we're going to blast through a few shards of information that have bloodied my windshield recently... but first some context.

The world is a web, interconnected at multiple levels but in it's entirety it is one giant capital flow chart. This is why looking at events, trends and prices from multiple angles and with historical context is critical. It means that in order to understand global capital flows and the world at large investors needs to be generalists. Specialisation renders one towards narrow focus by necessity. There is nothing wrong with narrow focus when you need it so long as it can be brought into focus through a broad understanding.

Let's therefore look at a number of topics.

In what I dearly wish was a delayed April fools joke the United Nations just elected Saudi Arabia to the Woman's Rights Commission. No isht! 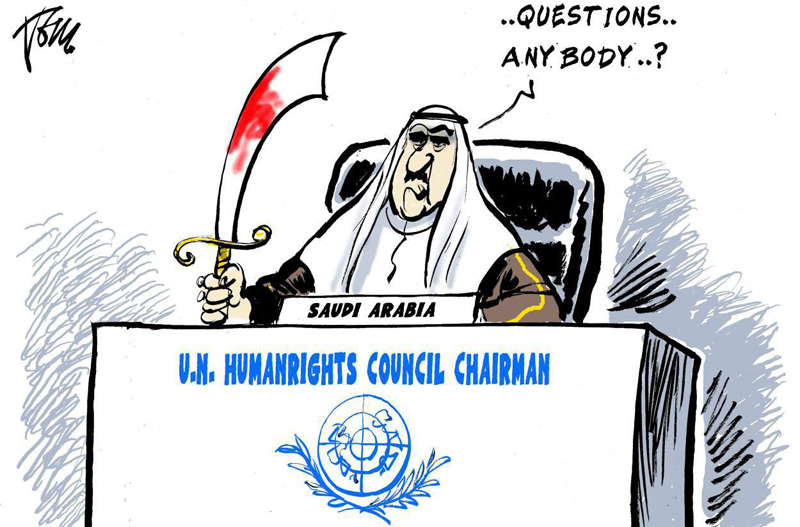 A quick reminder: this is the only country in the world which actually bans women from driving cars while implementing Sharia Law, which - for those among you who haven't read the intricacies of - permits, among other heinous things, honour killings. Way to go UN!

Question: does this make the UN complicit in crimes against humanity committed by Saudi Arabia's government? Oh, wait...

Why do I even mention this?

Davos men, the UN, the kleptocrats in Brussels, Washington, and sundry such creatures who muddy the halls of power are slowly losing their grip. This step - electing the fox in to guard the hen house - is a candid, dare I say it, balsy admittance to what we already knew. That they value money more than morals.

Why it's important is because, in their desperate desire for riches, they just dealt another blow to the establishment's credibility. Credibility rests on trust, and trust is easily destroyed. What these podium donuts have just done is provided additional kerosene to the anti-establishment fire, which - if they've not looked outside their windows - is smouldering around them.

When alternatives for governance are sought, as they are now, it doesn't require a genius to understand that views and beliefs are translated into how capital gets allocated.

Ask yourself this.. If Davos Man is increasingly shown to be the morally bankrupt sociopath he is, then at what point does faith in Davos Man's institutions and obligations (sovereign debt, I'm looking at you) get called into question?

In case you wondered what it was...

"Risk parity (or risk premia parity) is an approach to investment portfolio management which focuses on allocation of risk, usually defined as volatility, rather than allocation of capital."

Simplistically risk parity funds buy assets based on their implied volatility. If company X's volatility drops, then the models allocate more capital towards company X. By buying more of company X this has the effect of causing volatility to decline further. You get the picture. I've written about this before when talking about a bubble in dumb money.

Imagine buying companies not based on their balance sheets, income statements, or any of that boring stuff but purely on how volatile their share prices have been. Imagine... These risk parity funds are completely price insensitive. They don't even know what they're buying and will just as happily buy company X if it's trading at 200x earnings... so long as volatility is low.

Now, I would be remiss in mentioning that artificially low interest rates (thanks central banks) have had the effect of suppressing volatility in markets. These ETFs, coupled with sustained idiotic central bank policies, have created truly epic distortions in the markets.

And, just to prove that stupidity can last for quite some time, below is an updated chart on where things stand with this fun game.

3: Circling Back to the Saudis

I don't know about you but I find that when I need to understand something a little better it's often best to let the idea ruminate a little while before revisiting it. This allows it to mulch around in your brain, squeeze out the flatulent useless bits, and present you with what is usually be a better grasp on what really matters.

Sticking with this process, let's revisit the first topic of this week's WOW.

Curious minds should be asking the question: why on earth is the UN treating the Saudis like a cross between Mother Theresa and Ghandi?

Call me cynical but I reckon it's always about the money. So the fact that grand master Mohammad Bin Salman Al Saud has decided to list a sliver (5%) of Saudi Aramco may well have a little to do with this.

We know there are problems in the Kingdom. Serious problems.

And no, I'm not referring to the fact their poor citizens are governed by a bunch of psychopaths with medieval beliefs who would still be living in caves if it weren't for the black stuff under their sandals.

I'm talking about financial concerns around its now infamous decision in November 2014 to abandon its role as the global swing producer and ramp up production (even as global supplies were increasing and prices were collapsing).

Take a look at this:

Now take a look at this:

This is what a pegged currency looks like (Saudi riyal vs. USD).

So you're in a cash crunch, running the biggest budget deficits ever, you have to hold your currency peg which means dipping into your foreign exchange reserves, and you're fighting a wall of supply from Iran (a topic for another day but you can go listen to my conversations on Iran here and here). What do you do?

You do what anyone would do. You sell stuff.

The "Kingdom" had their first ever bond sale last year and now they're flogging Aramco to the world. The problem with all of these things is that you're needing to interact with the rest of the world a tad more and that still requires "legitimacy". A "credible" seat at the UN should help, no?

I wonder how much they paid the bankers for that seat at the UN?

We'll probably get some insight when we see where Aramco's shares get listed, and by whom.

4: The Wisdom of Age

Just in case we think we can fathom what the future holds. 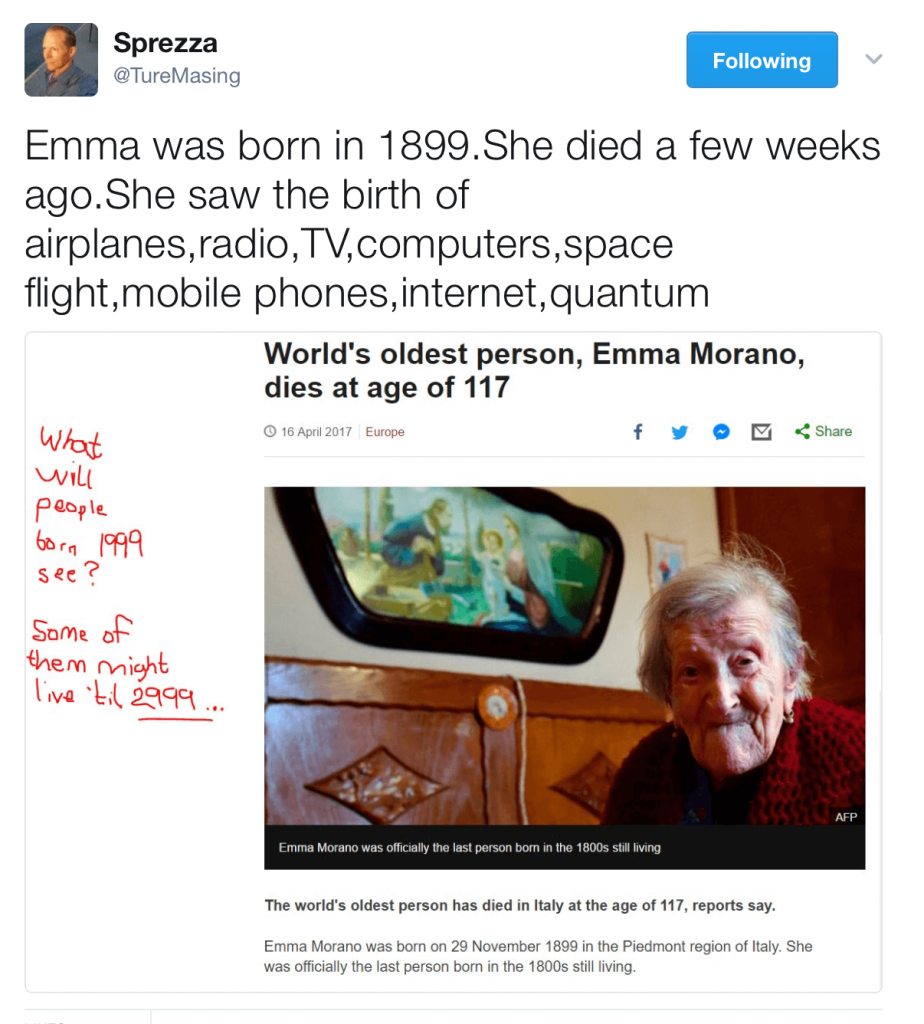 How much of what Emma witnessed in her 117 years on this ball of dirt could she have seen coming in her life?

The answer is not likely many things. But... identifying just one of the completely asymmetric changes that took place would have definitely been very, very well worthwhile for Emma. Imagine having had the ability and foresight to have invested in just one of the items Sprezza lists in its early phase... and hung on.

Identifying the trends could have been done but I dare say hanging on is likely the hardest thing for us humans to do.

5: And Lastly But by No Means Least

Did you see the massive rally in the euro?

I've a great number of thoughts on this which I share with Insider members this week, including what I think is a wonderful setup. I'd encourage you to join us.

After all, there are just a few days left in April, which means you can gain access to membership at the inaugural price... before the price goes up.

Until next time, have a good weekend.