Kim Dotcom; hacker, serial entrepreneur - and for a while the #1 ranked Call of Duty: Modern Warfare 3 player in the world - may be the key to the entire Seth Rich saga. From testimony in the Wikileaks investigation to Rich's still unsolved murder - and facing extradition - Dotcom is ready to go nuclear...

To bring you up to speed

Last week, Private Investigator Rod Wheeler appeared on Fox5 news in DC with an update in the unsolved murder of DNC IT expert Seth Rich, claiming proof exists on Rich's laptop proving he was Julian Assange's source for leaked DNC emails during the 2016 election - an account in direct conflict to the Russian hacking narrative based on a discredited IT firm's report.

Wheeler walked back his statements the next day, however the fuse was already lit... Weaponized autists on Reddit and 4chan began furiously digging back into the Seth Rich case for clues in the still unsolved murder - and they went deep.

Among the findings were Seth Rich's Reddit account, email addresses, and Twitter accounts - one of which was in support of candidate Bernie Sanders. As an aside - before joining the DNC, Rich moved to Washington DC to take a job with polling and research firm Greenberg Quinlan Rosner - whose founder Stanley Greenberg was a senior advisor to President Bill Clinton.

As Seth Rich posts reached a crescendo Friday night - dominating the front page of /r/The_Donald, the Conde Nast-linked website shut the 'subreddit' down for around 12 hours following a moderator's unrelated declaration of war on the rest of Reddit over censorship - completely killing the Seth Rich momentum. When The_Donald was reopened, 'officially' to aid the Seth Rich effort - the offending moderator had been banned and two other mods were removed from their positions. Seth Rich posts, however, are notably sparse. Oh, and Reddit edited Seth Rich's account during the lockout.

Kim Dotcom is pissed - and has been plotting revenge against Hillary Clinton, Obama, and Hollywood after being targeted in the biggest copyright infringement case in history - which included a massive illegal (and then legal) raid on his New Zealand mansion by 76 armed officers and two helicopters.

Also seized were giant screen TVs and works of art, US$175m (NZ$218m) in cash, the contents of 64 bank accounts world-wide, including BNZ and Kiwibank accounts in New Zealand, Government bonds and money from numerous PayPal accounts.

Police said last night up to $11m in cash was restrained in various accounts. -stuff.co.nz

Dotcom was arrested and thrown in prison for almost two months, and has been fighting ongoing court battles and pressure to extradite him to the USA ever since. In December of 2016, New Zealand's district court announced Mr. Dotcom was eligible for extradition - a decision upheld on appeal by NZ's High Court.

The Mega founder has stepped forward to offer proof that Seth Rich was one of Wikileaks' sources during the 2016 presidential election.

I knew Seth Rich. I know he was the @Wikileaks source. I was involved. https://t.co/MbGQteHhZM

I'm meeting my legal team on Monday. I will issue a statement about #SethRich on Tuesday. Please be patient. This needs to be done properly.

Stay tuned. Public invitation Kim Dotcom to be a guest on radio and TV. #GameChanger Buckle up destroy Trump media. Sheep that u all are!!! https://t.co/3qLwXCGl6z

If Congress includes #SethRich case into their Russia probe I'll give written testimony with evidence that Seth Rich was @Wikileaks source.

And he's crystal clear on why he's doing this

Democrats destroyed my business, attacked my family, stole my assets in a pay4play strike for the @MPAA

Essential reading about my case:

Turning back the clock - hinting at hacks 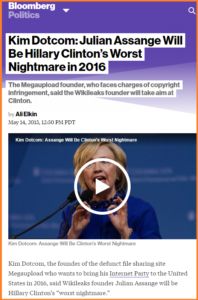 In December of 2014, Dotcom kicked off a series of tweets foreshadowing events to come - beginning with the claim that he was going to be "Hillary's worst nightmare in 2016." In a subsequent Bloomberg article from May of 2015 which used Kim's threat in the headline, Dotcom revealed that Julian Assange was about to unleash hell on Hillary Clinton - with Dotcom clearly involved;

“I have to say it’s probably more Julian,” who threatens Hillary, Dotcom said. “But I’m aware of some of the things that are going to be roadblocks for her.”.

Assange has access to information, Dotcom said -Bloomberg, May 2015

Hillary Clinton is raising a mountain of cash for her Presidential bid. I think it might turn into ash. pic.twitter.com/Nh8wnyj5AJ

Dotcom responds to an article from July of 2016 about classified info found on her server - directly hinting at upcoming leaks.

July 4th, 2016: Wikileaks tweets a link to a bunch of Hillary emails obtained legally under the Freedom of Information Act (FOIA).

July 22nd, Wikileaks releases around 20,000 emails related to the DNC.

October 7th, The Podesta emails begin to leak, which included emails to and from Hillary Clinton and associates.

The day after Wikileaks released the 20,000 DNC emails, Dotcom referred it as "Episode 1"

Episode 1 of the 'series' is great. Hillary has lost the Sanders supporters. Can't wait for season finale in Nov ;-) https://t.co/XEN2pzWUEp

Mishandling classified info is a crime. When Hillary's emails eventually pop up on the Internet who's going to jail? http://t.co/zuUNiq26bR

Kim goes into his beef with Hillary...

Hillary Clinton personally signed the request to extradite me from New Zealand. @HillaryClinton

Kim reaches out to Google employees

In light of this week's Reddit / 4chan investigation turning up Rich's email addresses (which Reddit scrubbed during the blackout), Dotcom is urging Google employees to submit Rich's email contents to Wikileaks.

To all @Google admins,
Submit #SethRich acc contents to @Wikileaks:

Why did Seth Rich do it?

Some people believe Rich became enraged after learning how Hillary and the DNC cheated against Bernie Sanders - who Rich supported. Furthermore, Rich worked closely with to the players involved in a suspected setup to make it appear that Bernie Sanders had 'hacked' Hillary Clinton.

Others have noted that 11 days after Seth Rich's death, a post in a pro-Bernie Sanders Facebook group suggested that Seth found out Hillary Clinton was rigging the election through fake polling stations whereby Bernie Sanders ballots were shredded and replaced with Hillary ballots.

How long was Rich working against Hillary Clinton?

Kim Dotcom began alluding to Hillary's downfall in December of 2014, six months after Seth Rich joined the DNC. Was Rich feeding Wikileaks information since then - or did Julian Assange have other sources? What made Kim Dotcom so confident? Recall that prior to working for the DNC, Seth Rich worked for Bill Clinton advisor Stanley Greenberg's polling firm Greenberg Quinlan Rosner. Is it possible Rich discovered things about the Clintons and/or Clinton Foundation which turned him off?

Seth Rich only accounts for the DNC emails, not John Podesta's

Ex-Kissinger official and CIA operator Dr. Steve Pieczenik went on record in November of 2016 to assert that rogue elements within US Intelligence agencies - not Russians - passed the information to Julian Assange.

Now consider the official story that the Podesta emails were obtained via phishing email scam, in which John Podesta fell victim to a fake email claiming to be a Google password reset.

Did that even happen? Or were Podesta's emails in fact obtained by 'rogue elements' within US Intelligence who passed them to WikiLeaks in conjunction with Seth Rich's email dump from the DNC?

I am hopeful the truth will emerge in the fullness of time.