There may not be a single notion among leftists that is more groan inducing than cultural appropriation. These people flip their lids every time someone borrows an idea from another culture. To them you’re a racist if you act, speak, or dress like anyone who isn’t from your tribe, or if you even celebrate their holidays. And of course, it generally only applies to white people, as if they’re going to ruin every culture they touch.

Now this petty belief is ruining reputations and livelihoods. It Portland, Oregon, it forced two successful business owners to close up shop. Kali Wilgus and Liz ‘LC’ Connelly, who are two white women, started a burrito business several months ago called Kooks Burritos. It was an instant hit. Last week they revealed in an interview with a local newspaper, that they had learned some of their recipes during a trip to Mexico.

Explaining their trip, Connelly told the newspaper: ‘I picked the brains of every tortilla lady there in the worst broken Spanish ever, and they showed me a little of what they did.

‘In Puerto Nuevo, you can eat $5 lobster on the beach, which they give you with this bucket of tortillas. They are handmade flour tortillas that are stretchy and a little buttery, and best of all, unlimited.

‘They wouldn’t tell us too much about technique, but we were peeking into the windows of every kitchen, totally fascinated by how easy they made it look. We learned quickly it isn’t quite that easy.’

‘This week in white nonsense, two white women—Kali Wilgus and Liz ‘LC’ Connely—decided it would be cute to open a food truck after a fateful excursion to Mexico,’ the piece opened.

‘The owners of Kooks Burritos all but admitted in an interview with Willamette Week that they colonized this style of food.

‘So let’s recap the story thus far: These two white women went to Mexico, ate tacos, and then decided they would just take what the locals clearly didn’t want to give them.

‘If that wasn’t bad enough, they decided to pack up all their stolen intellectual property and repackage it.’

The business was also eviscerated on Yelp by hyperventilating social justice warriors. 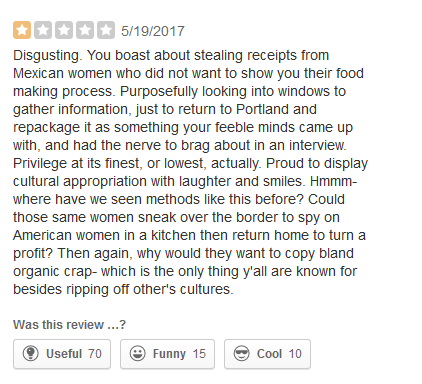 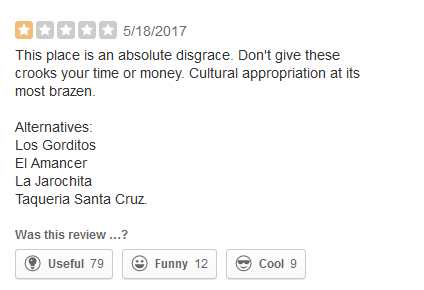 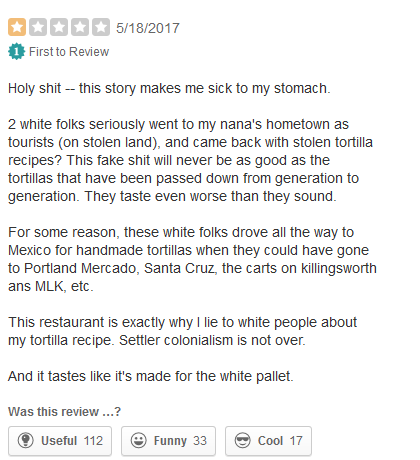 Somehow, I find it quite funny that there’s some sad sack out there, cautiously protecting his precious tortilla recipe from white people, but I digress.

Cultural appropriation is a bizarre concept when you think about it. It demands that you treat every culture like an animal in a zoo. You can admire them from afar, but don’t you dare touch.

It’s also a sign of severe cognitive dissonance among leftists. They claim they want everyone in the world to mix and live in peace, but they snap at people who dare to share another culture.

Ironically, it sounds an awful lot like regular old racism. It used to be that liberals fought ideologies that segregated races and cultures. Now these people are fighting for the same thing that racists in the past fought for; which is to maintain the purity of certain races and cultures. And just as it was in the past, this deluded belief is ruining lives.