Authord by Craig Wilson via The Daily Reckoning,

David Stockman joined Boom Bust to discuss the massive storm that is building and about to slam into Wall Street. During the discussion Stockman reveals what he believes is ahead for the stocks in the market and the economy.

The interview began with the Boom Bust host asking the acclaimed author about his concern surrounding a government shutdown.  David Stockman began “we’re in the midst of the biggest political train wreck in modern history… There will be no governance in Washington. There will be no tax bill, stimulus or infrastructure.”

“We’re heading for an expiration of the debt ceiling and running out of cash that will create an enormous crisis by August or September. They’re not going to be able to cope with it.”

“I think the odds by the day are increasing that we’re going to have a government shutdown. Expect the mother of all debt ceiling crisis. The market is utterly unprepared and it really is the orange swan that is about ready to take Wall Street by surprise.”

When prompted about the potential shocks to the S&P 500 and the threats stocks face in a severe decline Stockman continued to offer his sobering analysis.  The former Reagan cabinet member noted, “The market today is trading at 25 times S&P 500 earnings which were $100 a share in the period ending in March. That represents a tiny growth from $85 a share back in June 2007 – ten years ago. We’re about 1.2% over the last decade.”

“Why would you pay 25 times earnings for one percent growth after a tepid expansion of 100 months that’s near the end of its “sell by date?”

“We’re going to have a recession, likely sooner than later, and the market is dramatically overpriced. I would say sixteen times earnings given all the headwinds in the world and chaos in Washington.”

“The Fed is now finally going to begin to shrink its balance sheet and not just a little bit but by $2 trillion over the next two or three years. With all of that staring us in the face, the market is barely worth 1,600… There is a huge air pocket between the huge fantasy that prevails on Wall Street and the reality of the economic world.”

Deep State and the Stocks on Wall Street 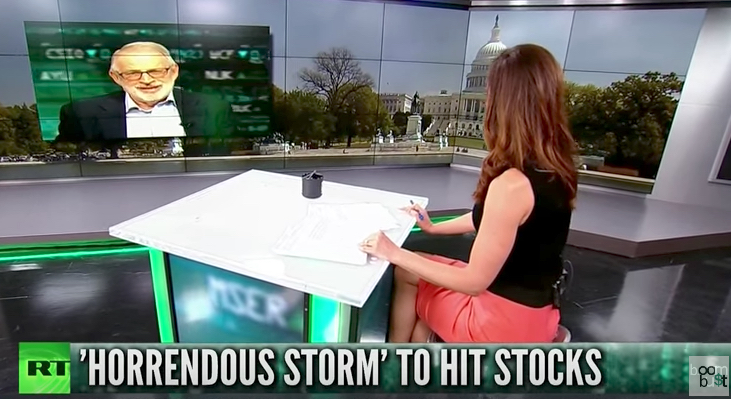 “Here we are and June is almost over. They haven’t even passed in the Senate yet a bill to repeal and replace Obamacare. If they do, it is totally incompatible with the House. They can’t get a Conference report before Labor Day, if ever.”

“The reason I saw a government shutdown is because the debt ceiling is now frozen at $19.8 trillion. They have $150 billion in cash. It is draining away by $2-$3 billion a day. They will be out of cash and there is no majority in the House or the Senate, for that matter, to pass a clean debt ceiling bill.”

Stockman left with a final warning for stocks noting that, “Without a clean bill, you’re having an enormous fight over what’s that quid-pro-quo to raise the debt ceiling. That will not end easily. It is likely to end in a complete breakdown like we saw in 2011.”