A Tale Of Two Gold Markets

Authored by James Rickards via The Daily Reckoning,

And that the equivalent of 1.8 million ounces of gold were sold at once. The 1.8 million ounce amount is equivalent to about 59 metric tons of gold. That’s about 2% of the entire gold mining production of the world for a full year. No one sells that amount of physical gold.

Besides, mining output is almost 100% pre-sold these days, meaning that if you wanted to buy that much gold directly from a mine, you couldn’t do it, because it’s already committed to fulfill existing contracts.

Forget about getting gold elsewhere too.

The largest gold mining country in the world, China, produces almost 500 metric tons per year. But China also prohibits the export of gold, so you can forget about sourcing physical gold from China.

Gold refiners won’t sell you any gold either. The largest refiners are working triple shifts around the clock to meet existing demand. Many refiners are having trouble sourcing gold in the form of doré from mines, scrap jewelry or existing bars to keep their refining operations going.

Gold is also leaving the custody of commercial banks and heading to nonbank storage at secure logistics providers such as Loomis and Brinks. These transfers do not change the total supply, but they do diminish the floating supply available to support the leveraged paper gold products offered by London Bullion Market Association dealer banks.

In effect, more and more paper gold is poised on top of on an inverted pyramid with less and less physical gold at the base.

All of this information about acute shortages of physical gold relative to demand is well documented. In addition, I have gathered a large body of firsthand confirmation of these facts.

Everywhere the story is the same. Physical gold is scarce, difficult to source and already spoken for when you can find it. Meanwhile, demand for physical gold remains robust.

I met with the heads of gold dealing for two of the largest banks in China, ICBC and UOB. They both told me that demand for physical gold among Chinese retail buyers is strong, despite some reports to the contrary.

Your correspondent standing on the Bund, a waterfront thoroughfare along the Huangpu River in Shanghai, China, during a recent visit. Behind me is the original headquarters building of the Hongkong and Shanghai Banking Corp. (now HSBC), built in 1923. While in Shanghai, I met with the heads of gold trading for two of the largest banks doing business there, ICBC and UOB. Both reported that supplies of physical gold were tight and demand remains high despite some reports to the contrary.

A gold refiner in Switzerland told me, “Jim, if you called to buy gold and I did not know you personally, I would not even return the call. We have none available.”

With that as background to the physical supply-and-demand situation, why is the price of gold not soaring? That’s how markets usually respond to tightness in supply.

The answer is that there really is no true market for gold, just a rigged game consisting of physical gold and paper gold trading side by side as if they were one and the same. They’re not.

The June 26 flash crash in gold is a good case in point. If I sold 59 tons of physical gold short and had to make good delivery, I couldn’t do it, nor could a bullion bank or dealer. Given the situation I described, you’d be lucky to source 5 tons in 30 days; even that would be difficult for anyone other than JPMorgan or HSBC. I would ultimately default on the contract and face a lawsuit for contractual damages and possible fraud charges.

But in the paper gold world, it’s not a problem.

You just pick up the phone, put the order in to your broker, post a relatively small margin amount (maybe $100 million on a $2 billion short sale, or 5% of the notional contract value) and you’re done. You’ve just destroyed the price of gold with no actual gold involved.

Futures markets exist ostensibly for hedging purposes, but it’s difficult to see why any commercial player would need to hedge 56 tons all at once. (By the way, orders of that size are usually “worked” over days or weeks. That avoids exactly the kind of market impact seen in this case, which hurts the hedging party because they get a lower price.)

The difference between legitimate speculation and fraudulent manipulation is often difficult to prove, because it requires some finding of “intent” in the mind of the manipulator. That can be elusive unless there is a smoking gun email or other written evidence.

In some ways, this doesn’t matter, because regulators have shown no appetite to enforce the law. The message to manipulators is that this is a big boy’s market and players can do whatever they want as long as it’s not too blatant. 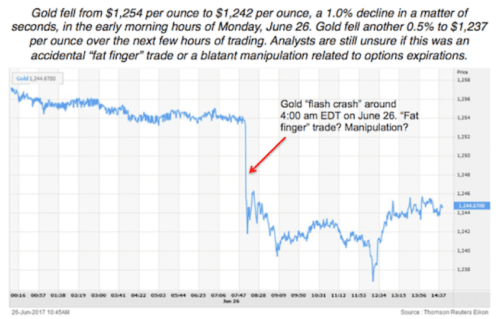 There is a lot of speculation about the actual motive of the flash crash paper gold short seller. Was this a so-called “fat finger” trade where the trader made a mistake by entering the wrong quantity or pushing the wrong button? That’s possible, but a more nefarious explanation comes to mind.

Paper gold trades not only as futures and bank forwards, but also as options on futures. The flash crash happened the day before an important expiration date in the options market.

Was a seller of call options at, say, $1,245 per ounce trying to sink the price the day before expiration in order to avoid a $10 per contract loss? That’s entirely possible, even plausible. We’ll probably never know, because enforcement in this area is almost nonexistent.

One of the most frequently asked questions by gold investors is, “Why should I invest in gold if the price is just going to get slammed by paper gold sellers with no actual gold? What’s the point?”

More broadly, where does the price of gold go from here?

The next powerful indication is the marked slowing of the U.S. economy in reaction to rate tightening by the Fed. This is showing up in auto sales, retail sales, disinflation, lower labor force participation and many other indicators.

The result of this slowing will be that the Fed will have to reverse course and use “forward guidance” to signal that they will not hike rates in September. That’s a form of ease that will lower the dollar index and raise the dollar price of gold.

Finally, investors can take comfort from the fact that all manipulations fail in the long run. Whether it’s the “gold corner” of 1869, the “gold pool” of 1968, Kissinger’s secret “gold dump” of the late 1970s, or “Brown’s bottom” (when the U.K. sold most of its gold at 30-year low prices) of 1999, or the more recent gold games on the Comex, all manipulations fail. Gold prices always find their way higher, because paper currencies always lose value over time.

The key response functions to manipulation are patience, confidence in the long-run path of gold and nimbleness in stepping up to buy gold at interim lows when manipulation gets out of hand, as it just did.

The gold rally that began on Dec. 15, 2016, is poised to continue despite the trauma of the flash crash. The crash represents a gift to investors. We now have a better entry point for what will still be much higher gold prices later this year.