The ongoing efforts to bring down Donald Trump are unraveling at an accelerating pace... 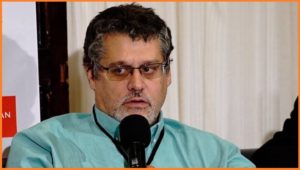 After it was revealed that Rob Goldstone - the man who arranged the now infamous Trump Jr. "setup" with a shady Russian attorney, is associated with Fusion GPS - the firm behind the largely discredited 35 page Trump-Russia dossier, the co-founder of Fusion GPS abruptly canceled his appearance before the Senate Judiciary Committee next week to testify in the ongoing probe into Russian influence in the 2016 election, according to Politico.

The committee announced Wednesday that Glenn Simpson of Fusion GPS was scheduled to voluntarily appear on July 19.

During the 2016 US election, Simpson's firm hired former British spy Christopher Steele to produce the 35 page dossier, accusing then-candidate Donald Trump of all sorts of salacious dealings with Russians. When Steele couldn't verify it's claims, the FBI refused to pay him $50,000 for the report - which didn't stop John McCain from hand-delivering it to former FBI director James Comey, or the Obama Administration from using it to start spying on Trump associate Carter Page.

As the Independent reported on Monday:

A spokesman for the President’s legal team told The Independent they now believed Ms Veselnitskaya and her colleagues had misrepresented who they were and who they worked for.

“Specifically, we have learned that the person who sought the meeting is associated with Fusion GPS, a firm which according to public reports, was retained by Democratic operatives to develop opposition research on the President and which commissioned the phony Steele dossier.” -Mark Corallo

Perhaps sensing he's totally screwed and now a huge liability to the deep state, Simpson canceled his testimony next week. 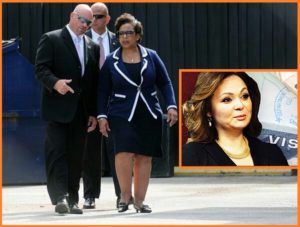 was revealed that Loretta Lynch's DOJ allowed shady Russian attorney Natalia Veselnitskaya into the U.S. under "extraordinary circumstances," President Trump quoted a report from The Hill at a press conference during his visit to France, stating "She [Veselnitskaya] was here because of Lynch, following up with “Nothing happened from the meeting... Zero happened from the meeting, and honestly I think the press made a big deal over something that many people would do.”

Lynch distanced herself in a Thursday statement, with a spokesperson claiming that the former Attorney General "does not have any personal knowledge of Ms. Veselnitskaya's travel."

The spokesperson did not go into detail about Veselnitskaya's case, but followed up by saying “The State Department issues visas, and the Department of Homeland Security oversees entry to the United States at airports.”

After Lynch's DOJ allowed Veselnitskaya into the country to participate in a lawsuit and nothing more, she had the now infamous meeting at Trump tower, met with current and former lawmakers from both parties, and was spotted in primo front-row seating at a House Foreign Affairs committee hearing on Russia.

What an interesting trip for Ms. Veselnitskaya...