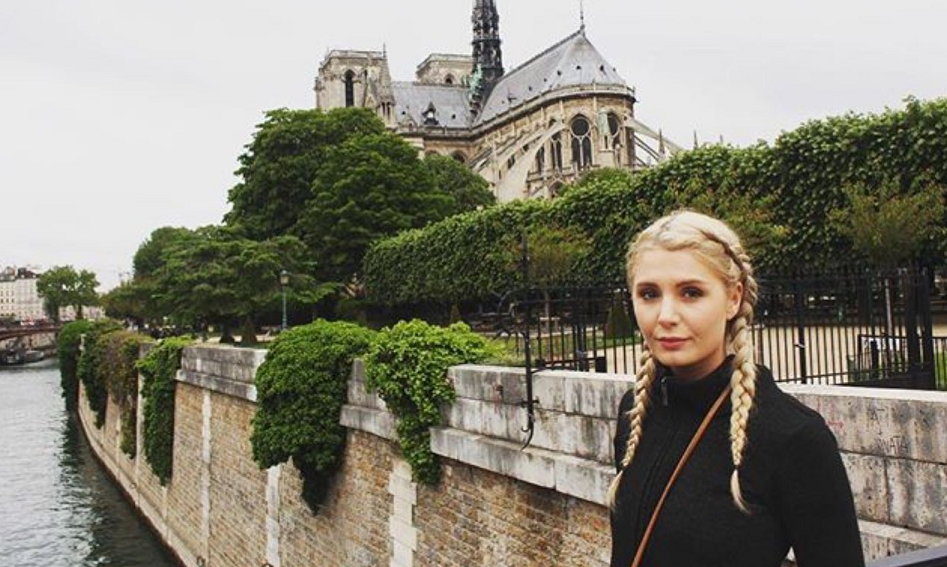 In a letter to Southern, the San Francisco tech startup with ties to the Kushner family wrote "It appears that you are currently raising funds in order to take part in activities that are likely to cause loss of life. We have therefore decided to remove your page from Patreon."

"They claimed I'm raising money that will get people killed," Southern told the Daily Caller - adding that Patreon refuses to consider an appeal.. 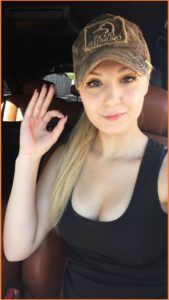 With over 300,000 subscribers to her youtube channel and just as many Twitter followers, Southern has amassed quite a fan base - and it's easy to see why. The entertaining Canadian gained notoriety throughout the 2016 U.S. election and beyond as a vocal Trump supporter - appearing at rallies, protests, and even the White House press room.

Covering a wide variety of topics with deadpan humor and a sharp wit, Southern has opined on Fake News, the problem of degenerate women, the war on fathers, and even had  his gender legally changed so SJWs would STFU. When YouTube began demonetizing Lauren's videos over subject matter deemed too controversial, she made a hilarious advertiser-friendly makeup tutorial.

And while overseas protesting and documenting hoards of migrants flowing into Europe, Southern shot footage at a French train station overflowing with new arrivals. 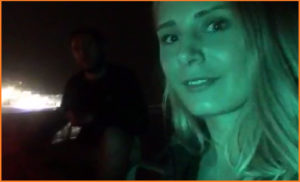 In May, 2017 Southern teamed up with activist group "Generation Identity" (Génération Identitaire) - part of the Identitarian "Defend Europe" movement, which "advocates the preservation of national identity and a return to 'traditional western values." Founded in 2012, DE has been actively resisting the Islamization of Europe with protests and attempts to physically block migrant entry - while raising money and awareness to help native citizens in need.

Génération Identitaire also organizes, every winter, solidarity tours with Europeans homeless, giving food, clothes and humanity to those whom are abandoned by the State for the benefit of migrants. -GI

Southern was briefly detained by the Italian Coast Guard in May when she joined up with Generation Identity and attempted to block German migrant ferry Aquarius.

More recently, Defend Europe raised €100,000 through crowdfunding  and chartered a 130 foot ship called the C-Star to intercept, disrupt, and send back to Africa the systematic influx of refugees from North Africa into Italy on a massive scale - a phenomenon reported on by ZeroHedge last year.

Southern's activism in the Mediterranean with a crowdfunded group is thought to be a major factor in Patreon's decision to ban her from the platform.

Meanwhile, Patreon has no problem letting actually violent Antifa continue to raise money on their platform... 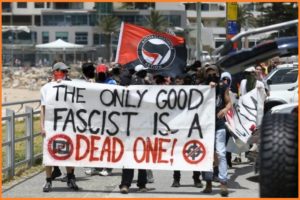 In a case closely monitored by investigative organization Far Left Watch, an Antifa anarchist group known as "It's Going Down" has been actively raising thousands of dollars through Patreon - despite numerous reports of TOS violations for advocating and taking credit for all sorts of criminal behavior - including snipping fiber optic lines, slashing tires, cutting fuel lines, and pouring concrete on train tracks. In other words, "activities that are likely to cause loss of life."

"Groups like Antifa and other self described “anarchists” have recently made the news for destroying millions of dollars worth of property, violently assaulting people with a deadly weapon, and even stabbing a police horse. 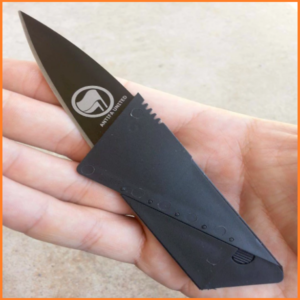 It’s Going Down is a self described “digital community center from anarchist, anti-fascist, autonomous anti-capitalist and anti-colonial movements. Our mission is to provide a resilient platform to publicize and promote revolutionary theory and action.”

So a radical Antifa group can raise money on Patreon, right now, and Lauren Southern can't because she's a conservative whose activities "are likely to cause loss of life." 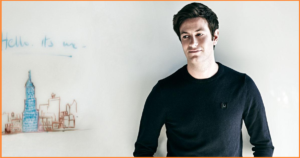 Founded in 2013, Patreon has raised $47.1 million of investment capital - $30 million of which was led by venture firm Thrive Capital, co-owned and managed by Joshua Kushner - brother of President Trump's son-in-law Jared Kushner. Of note, Joshua and Jared co-founded real estate firm Cadre - which got of the ground with a $250 million line of credit from George Soros).

Perhaps Josh Kushner can make a call to his buddies at Patreon and ask why they've beheaded Lauren Southern's income while allowing Antifa anarchist groups to raise thousands of dollars per month from their fellow comrades for their jihad against conservatism.

To say San Francisco based Patreon leans left is an understatement. From a rainbow of hair colors, to hipster everything, to an employee who simply goes by the name 'Bacon,' it's safe to say that Patreon probably doesn't have a lot of Trump supporters in the office. 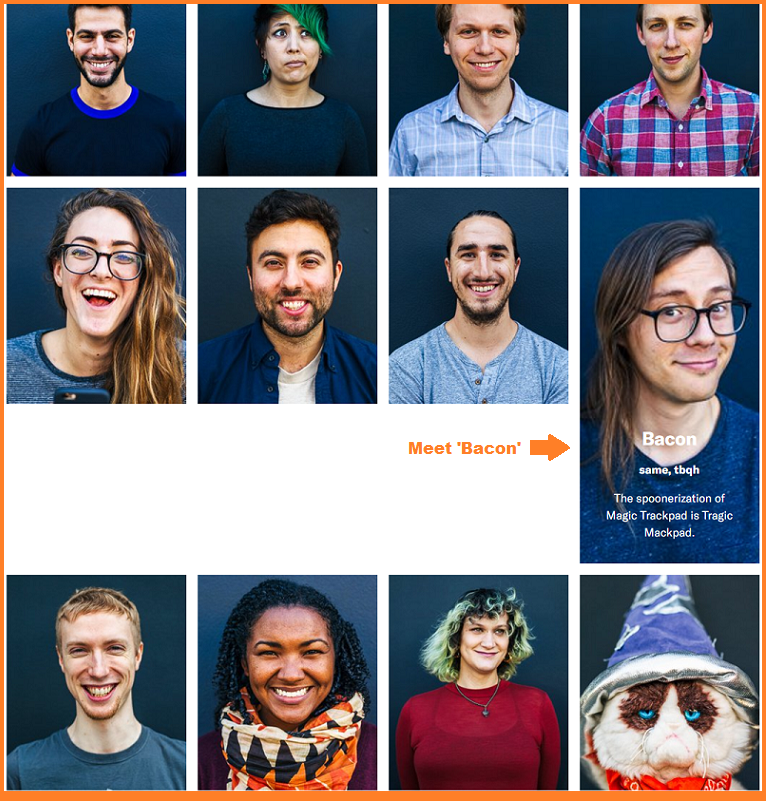 As GotNews published earlier this month, Patreon software engineer Aaron Riggenberg gave his stamp of approval to the "It's Going Down" Antifa group in a now deleted tweet. 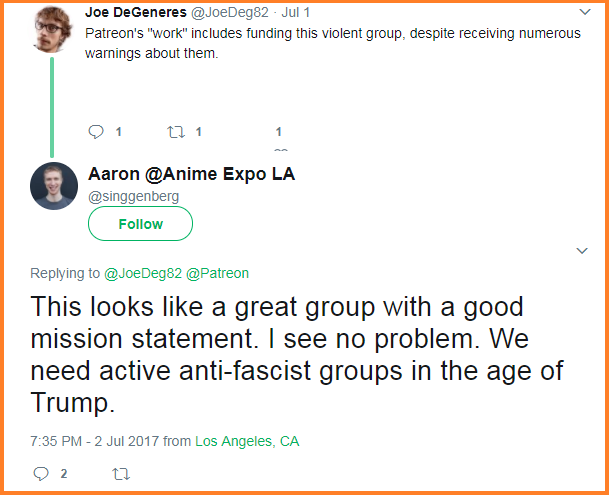 I wonder how many of Aaron's co-workers, up to and including management, share his views?

Cutting off conservative sources of funding

Over the last year, several conservative pundits and news outlets have experienced sharp dropoffs in ad revenues - such as YouTube personality Mark Dice, who has been getting messed with off and on. Is his Patreon account next?

In examining how the staffers working as website "raters" should evaluate a "rather poor site," the contractor pointed to InfoWars, advising raters to consider the quality of the information and its reputation. -Business Insider

And finally, Infowars host and YouTube star Paul Joseph Watson noted a sharp dropoff in ad revenue right around the same time - along with other conservative content creators.

This is my YouTube ad revenue since the crackdown. I don't get any of it anyway, but illustrates how independent voices will be strangled. pic.twitter.com/GgNwx1Hl0T

As liberal gatekeepers from ad serving companies and crowdfunding platforms deny revenue to conservative content creators, one wonders when conservative competitors to companies like Patreon will crop up to fill the vacuum created by the moralizing left.

Journalist Tim Pool has a great take on the situation:

I won't let them stop me. If you enjoy my work and want to see me keep doing what I do you can help here:
Paypal: https://t.co/T7GFXZL61q