Back on May 16th, private investigator Rod Wheeler said in a Fox News interview with Sean Hannity that he 'had very little communication with' the secret third party who helped finance his investigation into the murder of DNC staffer Seth Rich. In that same interview, he also said that he knew of someone, that was very credible, who claimed he saw Seth Rich's email(s) to Wikileaks. Watch, in his own words -- claiming that the DC police shut him down each time he asked about the Wikileaks.

"Maybe it is related to the DNC...a high ranking member of the DNC called the Rich family and wanted to know why was I snooping around."

Now, all of a sudden, Mr. Wheeler is having a change of heart. He's claiming that, Malia Zimmerman, author of the fake Fox News article that wrongly attributed two quotes to Wheeler that had not been said, which has since been retracted, wanted to 'shift the blame from Russia and help put to bed speculation that President Trump colluded with Russia in an attempt to influence the outcome of the Presidential election." Named in Wheeler's suit are Zimmerman and Fox News contributor Ed Butowsky -- a friend to former Press Secretary Sean Spicer and Steve Bannon. According to Wheeler, Butowsky approached Wheeler in February with an offer to finance an independent investigation into the unsolved murder of Seth Rich. Bear in mind, Wheeler had said, on the record, that he was hired by the Rich family and had very little contact with the anonymous third party who was financing the whole thing. Wheeler now alleges Butowsky contacted him about investigating the Rich case, but warned him to "Make sure to play down Fox News. Don't mention you know Malia." Source: Bloomberg

"Butowsky and Zimmerman were not simply Good Samaritans attempting to solve a murder," Wheeler said in the suit. They "hoped that, if they could confirm that Seth Rich leaked the DNC emails to WikiLeaks, that would debunk reports the Russians were responsible for the DNC hacks."   The allegedly faked quotes used in the story, attributed to Wheeler, include, “My investigation up to this point shows there was some degree of email exchange between Seth Rich and Wikileaks." Wheeler was also falsely quoted saying the Democratic National Committee or Clinton’s team were blocking the murder investigation.

Wheeler claims that Butowsky kept Spicer, Bannon and DOJ director of public affairs, Sarah Flores, apprised on his findings. Ms. Flores flatly denied having any contact with Butowsky this year, saying “I have not communicated with Mr. Butowsky at any point this year." According to the suit, Wheeler said President Trump wanted the bogus quotes attributed to Wheeler in the Fox story, saying “that is the way the President wanted the article."

The first paragraph of Wheeler’s complaint includes a screen shot of a May 14 text message to Wheeler by Butowsky that reads: “Not to add any more pressure but the president just read the article. He wants the article out immediately. It’s now all up to you. but don’t feel the pressure."

“Fox News was working with the Trump administration to disseminate fake news in order to distract the public from Russia’s alleged attempts to influence our Country’s presidential election. Rod Wheeler unfortunately was used as a pawn by Ed Butowsky, Fox News and the Trump administration to try and steer away the attention that was being given about the Russian hacking of the DNC e-mails.”

NPR has confirmed that a meeting had taken place between Butowsky and Spicer at the White House.

Spicer now confirms meeting with the two but denies claims about the president.   "Ed's been a longtime supporter of the president and asked to meet to catch up," Spicer tells NPR on Monday night.   "I didn't know who Rod Wheeler was. Once we got into my office, [Butowsky] said, 'I'm sure you recognize Rod Wheeler from Fox News.' "   Spicer says Butowsky laid out what they had found about the case. "It had nothing to do with advancing the president's domestic agenda — and there was no agenda," Spicer says now. "They were just informing me of the [Fox] story."

According to the suit, Butowsky was also responsible for informing Wheeler of the 'credible' third party who had seen Rich's emails to Wikileaks.

On May 10, Butowsky and Zimmerman call Wheeler to say they have an FBI source confirming emails were sent from Seth Rich to WikiLeaks, though they do not share the source's identity, according to the investigator's suit. Wheeler will later say this is the only federal law enforcement source that Fox News — or he — has related to this story.

Moreover, the night before the Fox story ran, Butowsky coached Wheeler on what to say on tv.

"[T]he narrative in the interviews you might use is that you and [Fox News reporter Malia Zimmerman's] work prove that the Russians didn't hack into the DNC and steal the emails and impact our elections." In another text, he writes: "If you can, try to highlight this puts the Russian hacking story to rest."

Adding insult in injury, the Fox News author of the fake news article, Malia Zimmerman, contacted the father of Seth Rich, distancing Fox and herself from Wheeler, stating: "Much of our information came from a private investigator, Rod Wheeler, who we understand was working on behalf of you." When Wheeler confronted her about the letter she had sent to Mr. Rich, Zimmerman claimed "That's the email that Fox asked me to send him. They wrote it for me." Butowsky tried to calm Wheeler by saying "One day you're going to win an award for having said those things you didn't say." The night before Wheeler was scheduled to appear on the Hannity show, Malia Zimmerman texted him "Reread the story we sent you last night [that contained the invented quotes] and stick to the script." Wheeler had recorded some of his conversations with Butowsky and had them transcribed for purposes of the suit. Before Fox retracted the story. 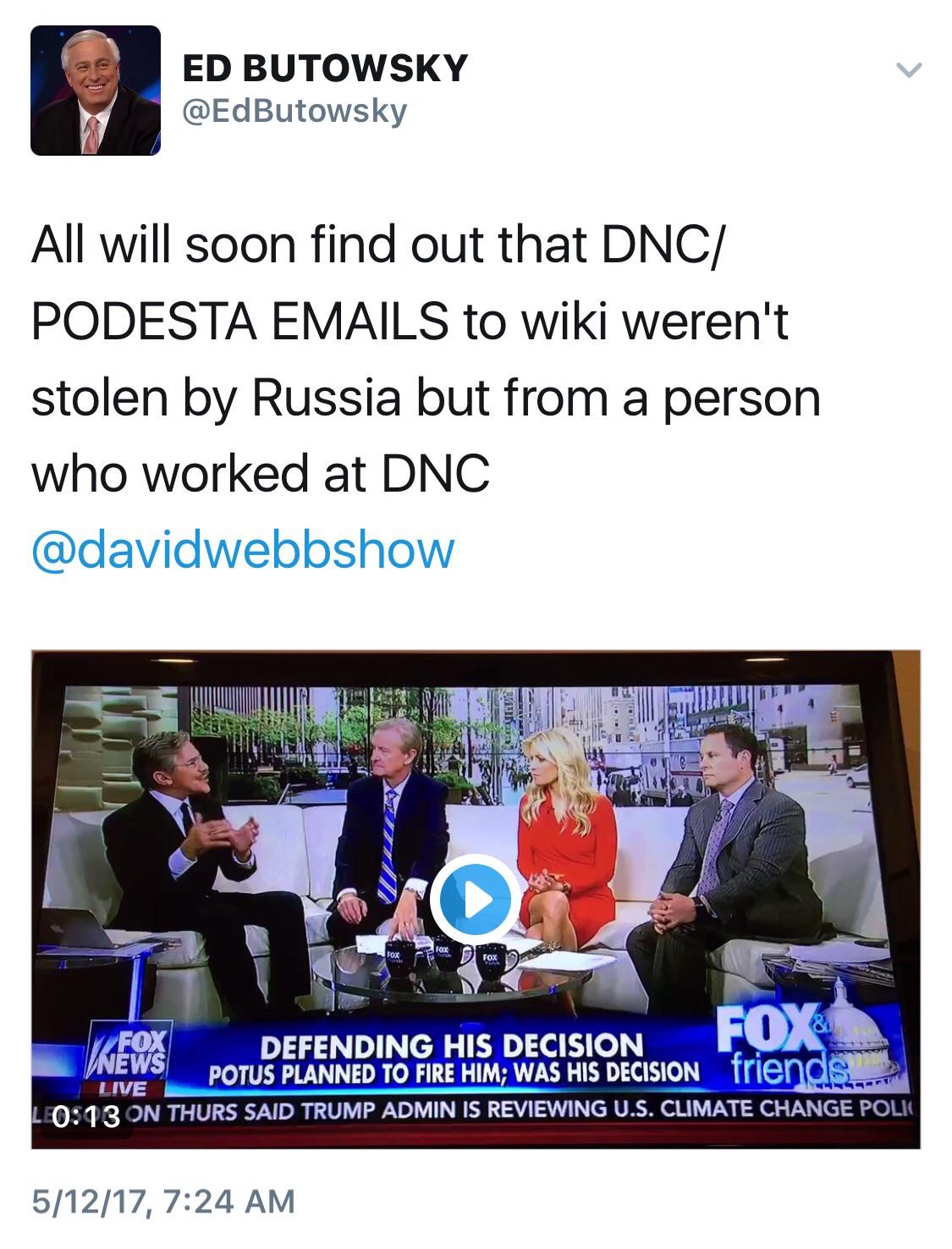 After Fox retracted the story and Wheeler threaten to sue. 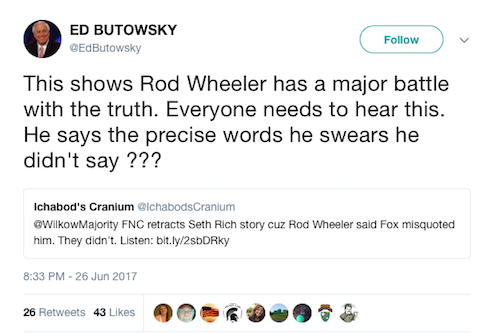 Butowsky has since deleted his Twitter account. Ed is a self described wealth manager who 'for serial entrepreneurs, high-net worth and ultra-high-net worth individuals, professional athletes and celebrities.'   ............   If you thought the suit couldn't get more bizarre, think again. Wheeler is also suing for racial discrimination against Fox, claiming the network had given him less airtime than white colleagues. It's worth noting, Wheeler's attorney, Douglas Wigdor, represents several other current and former Fox staffers who've made similar claims.