Authored by David Stockman via The Daily Reckoning,

Just call it Peak Crazy and move on. There is absolutely no reason for the stock markets to be at current levels, let alone melting-up day after day. The fact that this is happening is a measure of how impaired capital markets have become as a result of massive central bank intrusion.

The robo-machines and day traders keep buying the dips because that has “worked” for the last 100 months. There is nothing more to it than residual momentum.

Under a regime of honest money and price discovery, the stock market discounts the future. There is no plausible future from here that’s worth 24 times S&P 500 value or 96 times the Russell 2000.

Surely the year-ahead earnings boom that Wall Street’s artists have penciled in is not in the slightest bit plausible. With 84% of the S&P 500 reporting Q2 results, LTM earnings are still 1.3% below where they were in September 2014.

Nothing has happened to corporate earnings in the last three years except deflation in the energy, materials and industrial sectors. After hitting $106 per share in September 2014, the global deflation cycle brought them to a low point of $86.44 per share in March 2016 in response to low $30s oil prices. The latter has since recovered to the $50 dollar zone – bringing S&P 500 earnings back to $104.61 during the current quarter.

The question remains: How does an aging business cycle and immense global headwinds justify the expectation of a red hot earnings breakout during the next 18 months? Yet that’s what’s happening on Wall Street. We’ve hit nearly $133 per share of GAAP earnings (and $145 of the ex-items variety) for the LTM period ending in December 2018, meaning a prospective surge of 27%.

Even if you credit Wall Street’s ex-items approach to operating earnings, the story is the same. Why will the eventual 2018 outcome be any different than the cliff-diving of the last three years? 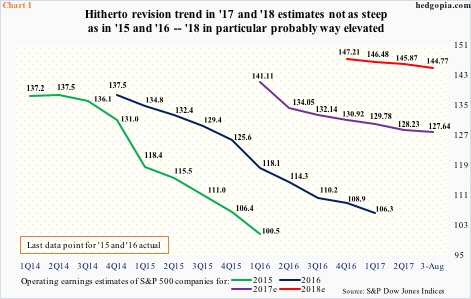 The current earnings growth estimated for 2018 would amount to more than the 23% gain that has been recorded during the past decade!

In June 2007, reported LTM earnings for the S&P 500 was posted at $85 per share. That would mean that earnings have grown at the tepid rate of 2.1% per annum for the last 10-years; and those are nominal dollars.

Take out inflation and share buybacks and there’s essentially no gain at all on a peak-to-peak basis.

When it comes to robo-traders, there are some very powerful muscle memory aspects pushing the averages relentlessly higher. It’s the deformation you get when the normal mechanisms of market discipline, such as short sellers and economic pricing of options and hedges, that are destroyed by wealth effects based central planning.

It is Wall Street’s extreme vulnerability to violent crashes that come when two-way markets are destroyed in the name of tricking people into believing they are wealthier than they actually are. The bubble reaches its height and then there is nothing left below because stock prices have become decoupled from economic and profit fundamentals. 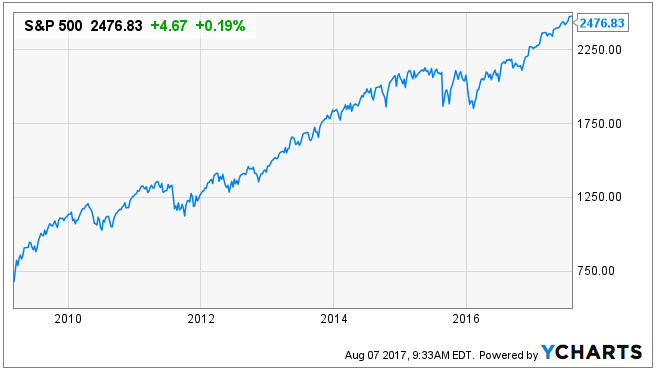 The financial truth remains that nothing grows to the sky, including the Dow index. The cracks are already emerging all around. The end-of-bubble narrowing to fewer and fewer big cap safe havens is proceeding rapidly.

In this machine driven market, any of these indices could resume their mad momentum based climb. But negative divergences are breaking out everywhere, and that’s usually a sign that the end is near.

Margins on debt has again reached an all-time high of $550 billion. The chart below leaves little doubt as to what comes next. After the 2000 peak, margin debt collapsed by 50% as stocks were violently liquidated to meet margin calls. All this while in 2008 the shrinkage of margin debt was even larger – nearly 60%. This time, however, a similar shrinkage would cause a $325 billion decline in margin balances. That’s a lot of stocks on a fire sale. 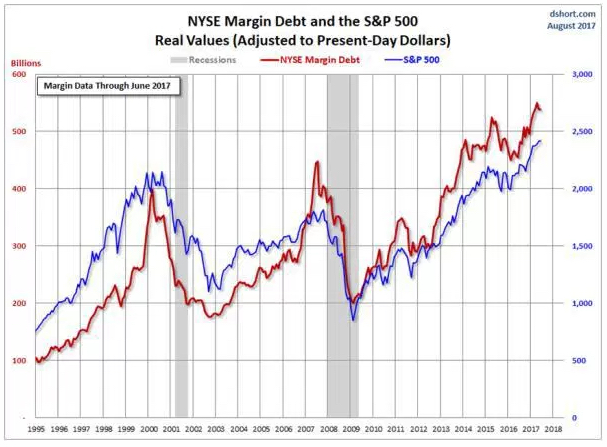 The casino will eventually collapse under its own weight, even as the fractures and divergences continue to mount.

The economic Swans are coming. If Trump’s continued tweet-storms are any indication, the first Swan is likely to be Orange. The fact is, the occupant of the Oval Office is flat-out delusional and unhinged.

Within 4-5 weeks Trump will be impaled on a debt ceiling and continuing resolution crisis which will suck all the air from the governance process in Washington. The event will make a mockery of the White House pitch and any belief for House action on the tax bill in October.

The only thing which will happen by year-end on Capitol Hill is an inglorious defeat on ObamaCare repeal (instead, there will be an insurance company bailout in return for some tiny changes in the ObamaCare insurance mandates). Expect repeated short-term patches on the debt ceiling and continuing resolutions that will manage to keep the lights on in the Washington Monument a few weeks at a time.

We seriously doubt the Donald will survive the market crash which is likely to be triggered by the unexpected fiscal bloodbath just around the corner. From there he will rue the day that he left Janet Yellen at the Fed in place, rather than allowing the “big fat, ugly bubble” to collapse on their account in January.

Now that Trump and his surrogates are taking ownership of a hideously over-valued stock market, there’s little doubt that the coming crash will be the straw that breaks the camel’s back.

As we have previously noted, Tricky Dick’s election in 1972 was also treated with a 15% market bump. And that was on the back of a 42-28 million vote landslide and running the tables on the electoral college with 504 votes. 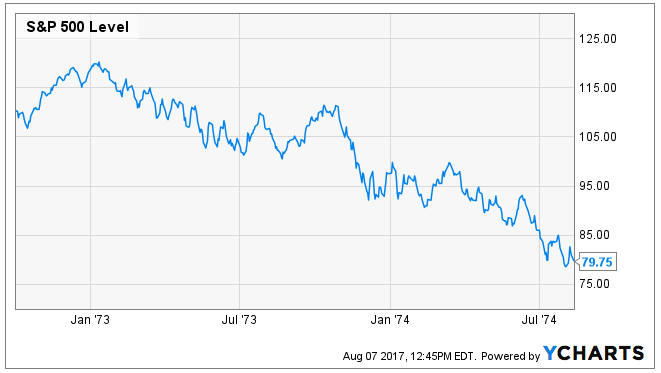 Nixon appeared to be especially invincible in January 1973 because he had spent 27 years on the GOP circuit. He had spoke for more GOP politicians and candidates than any President in recorded history, before or since.

Still, the Nixon bubble evaporated steadily – dropping by more than one-third until Tricky Dick was shown his way out of the White House.

It now seems likely that Trump Bubble’s collapse will be far faster, deeper and more violent. The Orange Swan is what now hangs over the market like the Sword of Damocles. The question is only about when, not if, it comes plunging down on a casino mad with Peak Crazy.