Hands up if you've got kids.

This is how it works. And tell me I'm wrong.

Your progeny sees something, wants it, and asks for it. Could be an ice-cream, a fluffy toy, or that juicy sandwich you just prepared. Sometimes they get it, often they don't. Time progresses and your tolerance regresses. 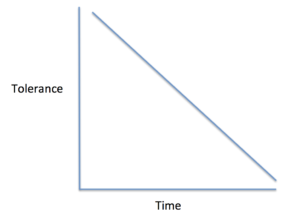 "The answer's still no."

It's as automatic as your knee flex when Dr. Sergei brings out his little rubber hammer and pops you on the knee. Boing. No!

Automatic responses come from habit, and habit is, at least initially, a function of risk and reward.

This is bureaucracy in a nutshell.

Take Mikhail, a middle aged bureaucrat, who, through a combination of lack of foresight and time working for the beast, has had all the life and common sense sucked right out of him. Innovation and risk are as foreign to Mikhail as sushi to a Masai warrior.

Mikhail's job pays him to tick boxes and ensure all boxes are ticked. Mess it up and he get a pink slip and the money for his kids' university and wife's shoe fetish stops flowing. Risk. Pain.

Along comes Ivan with something out of the box. A new business, in a new industry. It doesn't even fit in any of Mikhail's boxes. Risk. Pain.

Ever wondered why countries with high levels of bureaucracy never have much innovation?

It's all risk, no reward for Mikhail.

So along comes Bitcoin, and governments (not just the Ruskies) initially banned it.

The Problem with Bitcoin

It's that nobody actually asked for permission from Mikhail. Permission wasn't granted but then it was never needed. A protocol doesn't give an "isht" about any central authority and can't be argued with. That'd be like arguing with soil.

When Sophia in Moscow wanted to use Bitcoin, she did. And when Yoshiko in Tokyo wanted to, she did. A government that said no-no, bad, dangerous, scary, only to have the kids go ahead and play in the traffic anyway, looked awfully like a eunuch - impotent.

The about turn notably from both Japan and Russia isn't because the paper pushers suddenly took a swig from the innovation and risk bottle but because they're largely powerless to stop it.

Providing Authority After the Fact

Imagine your snotty little kid Johnny, rather than asking you for something, simply going ahead and taking it.

Imagine further that there was absolutely nothing you could do to stop him. Would it not, at least ostensibly, be far easier to turn around and just say, "Oh no, it's OK. Johnny Snotnose has my blessing."

After all, suggesting it's not sanctioned would reveal a weakness, especially if you couldn't bring out the cane for Johnny.

Weakness, as mentioned last week, is anathema to leaders who rule with fear.

And so it is that last month, at the St. Petersburg Economic Forum, Vlad met with Vitalik Buterin, developer of Ethereum, where reportedly the Russian President viewed the technology as a "promising tool to assist Russia in diversifying its economy beyond oil and gas". According to a statement on the Kremlin’s website, Putin said:

Now, before you sing with the choir of libertarians thinking Vlad just joined the ranks, just remember that along with all bureaucrats everywhere they will want their slice of the pie - a topic I discussed just the other day.

Here's a question for you: What does Russia have a lot of?

Vodka? Yes. Brides online? Yes. But get your head out of the gutter, what else?

Mining cryptos requires cheap energy, something Russia has a helluva lot of.

This matters when you're running servers, which give of more heat than one of their suicide bombers. This makes mining farms in hot places an economically tough call. Russia, on the other hand, has both cheap bountiful energy as well as sub-zero temperatures. Perfect for crypto mining. Something you can do while swilling vodka and searching for a bride.

Russia's central depository is building its own crypto currency wallet:

"Russia's National Settlement Depository (NSD), the central depository for Moscow Exchange, the largest exchange group in Russia, is developing a blockchain platform to provide deposit and settlement services for digital assets and cryptocurrencies."

These are significant events because they signify that crypto currencies are not only now being taken seriously by business but increasingly by governments.

Washington being brilliant just sanctioned Russia and managed to piss of both Vlad and Angela in one fell swoop.

This after accusing Xi of being a naughty boy and now pressuring him to "do something" about young Kim. This is the sort of fragmentation I promised you last year was the future with the incoming "strong men", and with fragmentation comes a deeper desire to de-risk one's position.

Tell me, if you were Vlad or Xi sitting on a pile of Benjamins, would you feel more or less comfortable?

Yeah, that's what I though, too.

"We can ignore reality, but we cannot ignore the consequences of ignoring reality." — Ayn Rand

this topic as well. Go here to access them (free, of course).