Less than a week after white supremacist James Alex Fields drove his car into a crowd in Charlottesville, VA, leaving one dead and 19 injured, leaked chat logs from several weeks before the event reveal protesters joking about mowing down counter-protesters blocking their path.

Of note, several conservative groups around the country who are not affiliated with white supremacy or Neo-Nazi movements, such as The Three Percenters, have severed all ties with the protests in the aftermath of last weekend’s deadly events.

“While we support and defend everyone’s right to free speech, we will not align ourselves with any type of racist group.”

In screenshots from a ‘Discord’ chat room moderated by former liberal Obama activist turned white supremacist event organizer Jason Kessler (username ‘MadDimension’), attendees can be seen discussing transportation in case things turned violent. While one member’s suggestion to use Uber was shot down, another participant suggested coordinating with Enterprise rent-a-car in case of a ‘worse case scenario.’

In a subsequent comment, user AltCelt(IL) posted a picture of a two buses being mobbed by protesters, typing ‘this will be us’ below.

In response, an event organizer named ‘Tyrone’ – who worked closely with Kessler, advised the group that it would be legal to mow down protesters under certain circumstances:

‘I know NC law is on the books that driving over protesters blocking roadways isn’t an offense. This is crossover for this channel and VA law. Sure would be nice,‘ along with a meme of a John Deere ‘Multi-Lane Protester Digestor.’ –‘Tyrone’

It is unknown whether or not 20 year old James Alex Fields, the white supremacist arrested after his 2010 Dodge Challenger plowed into a crowd of counter-protesters, was in the Discord chat room at the time – however members of the group “Vanguard America,” which Fields belonged to, participated in Kessler’s server.

What we do know is the same ‘Tyrone’ who made the vehicle-ramming comments also made several posts telling members that attending the event ‘in general’ would be risky.

Attendees of #UniteTheRight in #Charlottesville discuss legality of plowing into protesters with a vehicle, less than one month before rally pic.twitter.com/bVOAisOOZG

What else do the chat logs reveal?

Over 300 screenshots leaked exclusively to unicornriot.ninja were made available in a 65 MB .zip archive on Friday. Here are a few more notable finds:

To preface, perhaps this 2015 blog entry of Kessler’s in which he proclaims “I can’t think of any occupation that I admire more than the professional provocateur” can shed some light on how a hyper-liberal Occupy activist did an ideological flip and wound up leading a group of white supremacists in a protest that has since polarized the nation:

And while I’m sure Jason Kessler’s white power buddies didn’t know he had a Jewish girlfriend and African roomates, or wrote and performed African revenge-pornpoetry – slamming the “evil” white man, or was a huge Obama supporter who was heavily involved with the Occupy movement – writing two articles for CNN on the topic, Kessler sure organized last weekend’s white power rally like a pro – even intervening when participants got into a fight.

And in addition to applying for a license to hold the protest in Emancipation Park and successfully utilizing the ACLU to sue the city when it was rejected, Kessler issued instructions to the group regarding the tiki torch ceremony and other matters.

Kessler was concerned about optics… 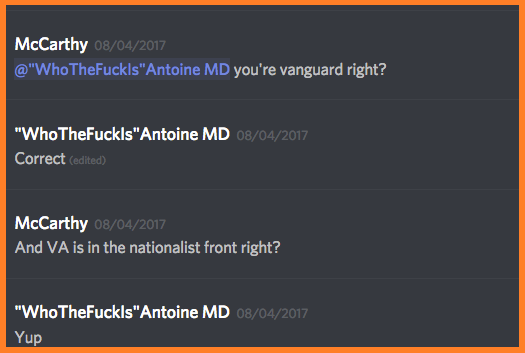 Although I guess he didn’t mind the optics in May when he was hanging out with white supremacist Richard Spencer at Jackson Park:

Some have questioned whether or not the May demonstration was a ‘dry run’ for last weekend’s ill-fated rally. Note Kessler’s long pause at the :15 second mark when asked. 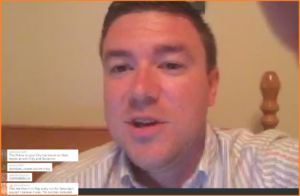 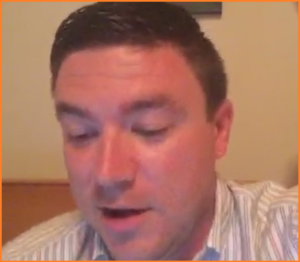 Kessler also didn’t mind the optics of the haircut he got to match his new friends attending the ‘Unite the Right’ protest he organized.

Self professed agent provocateur got a haircut to play the white supremacist role for #UniteTheRight rally. Left 2/15/17 & on right today pic.twitter.com/cAUB6998pz

‘Unite the Right’ attendees were also weary of was VA felony mask laws – something the police did not enforce when it came to masked Antifa, as well as whether or not they’d be turned away if the wore shirts with swastikas instead of the polo / khaki ‘uniform’ most of the group can be seen wearing. 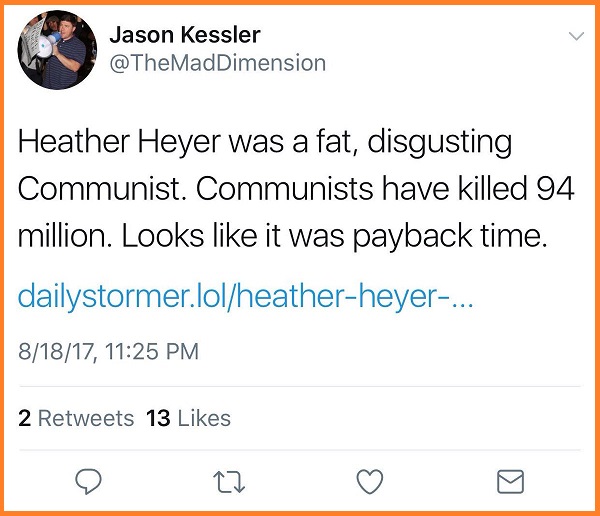 This allowed Richard Spencer to cauterize the compromised Kessler from the tiny movement I’m sure we haven’t heard the last of.

After his offensive tweet, Kessler stated “I repudiate the heinous tweet that was sent from my account last night. I’ve been under a crushing amount of stress & death threats,” adding “I’m taking ambien, Xanax and I had been drinking last night. I sometimes wake up having done strange things I can’t remember.”