This is the Single Most Important Chart in the World

Yesterday we talked about the US Dollar ($USD) dropping below critical support.

By quick way of review, here’s the key chart. As you can see, the $USD staged a large bull market run in 2014 as the Fed wound down its QE program. The greenback was then range bound for three years until this month when it broke down in a big way. 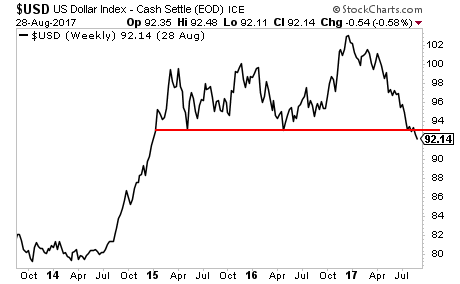 Today I want to talk about the long-term chart of the $USD, as well as the implications of this chart on other asset classes.

Here’s the $USD’s chart running back 40 years. I call this the “single most important chart in the world,” because how the $USD moves has a massive impact on all other asset classes. 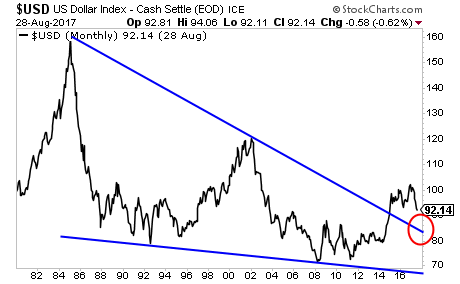 As you can see the $USD broke out of a massive 40 year falling wedge pattern. This initial breakout has failed to reach its ultimate target (120) and is now rolling over for a retest of the upper trendline in the mid-to low-80s.

Put simply, this chart is telling us that the $USD is going to be collapsing in the coming months.

The implications of this are going to be tremendous for the financial system. US corporate profits will be increasing particularly for large multi-national companies. Emerging Markets will outperform.

And most importantly, the $USD's collapse  is going to be like rocket fuel for inflation trades. Smart investors will use this trend to make literal fortunes.

If you’re not taking steps to actively profit from this, it's time to get a move on.

We just published a Special Investment Report concerning a secret back-door play on Gold that gives you access to 25 million ounces of Gold that the market is currently valuing at just $273 per ounce.

The report is titled The Gold Mountain: How to Buy Gold at $273 Per Ounce

We are giving away just 100 copies for FREE to the public.

To pick up yours, swing by: