ISIS has tripled-down on its claim that Las Vegas shooter Stephen Paddock was both a convert to Islam and operating on its behalf in its just published edition of its weekly Naba newsletter. The Islamic State propaganda newsletter features infographs and new specific claims concerning Paddock, who the terror group identifies according to the Muslim name, Abu Abdul Barr al-Amriki (or Abu Abdul Barr "The American").

Whereas ISIS media statements initially said Paddock converted "months ago" the new publication now claims he converted six months ago. Minutes after the newsletter was issued, counter-terror analysts focused on the specificity of that particular new information. Thus far investigators have failed to uncover or make public a motive for the mass attack which left 59 dead and over 500 wounded in the deadliest shooting in American history.

Assuming that FBI and police investigators are truly coming up short on motive or ties to terrorism, a main perplexing oddity that stands out is the clearly immense amount of prepping and planning that went into the attack combined with the seemingly non-existent public messaging left behind by the shooter. According to Max Abrams, counter-terror expert and professor of international relations at Northeastern University, little about the attack currently makes sense, as inexplicably "the killer went to very elaborate efforts to kill the maximum number of strangers for no apparent reason."

Although ISIS has repeatedly claimed credit for the shooting in the days after the attack, both his brother and authorities have dismissed the possibility. He had "no religious affiliation, no political affiliation," Eric Paddock said in an interview, adding: "He just hung out."

Yet ISIS' latest claims in its Naba newsletter are giving pause to some analysts who have been monitoring the group's multiple publications since their foundations.

Below is the newest ISIS infograph released as part of the publication with translation underneath: 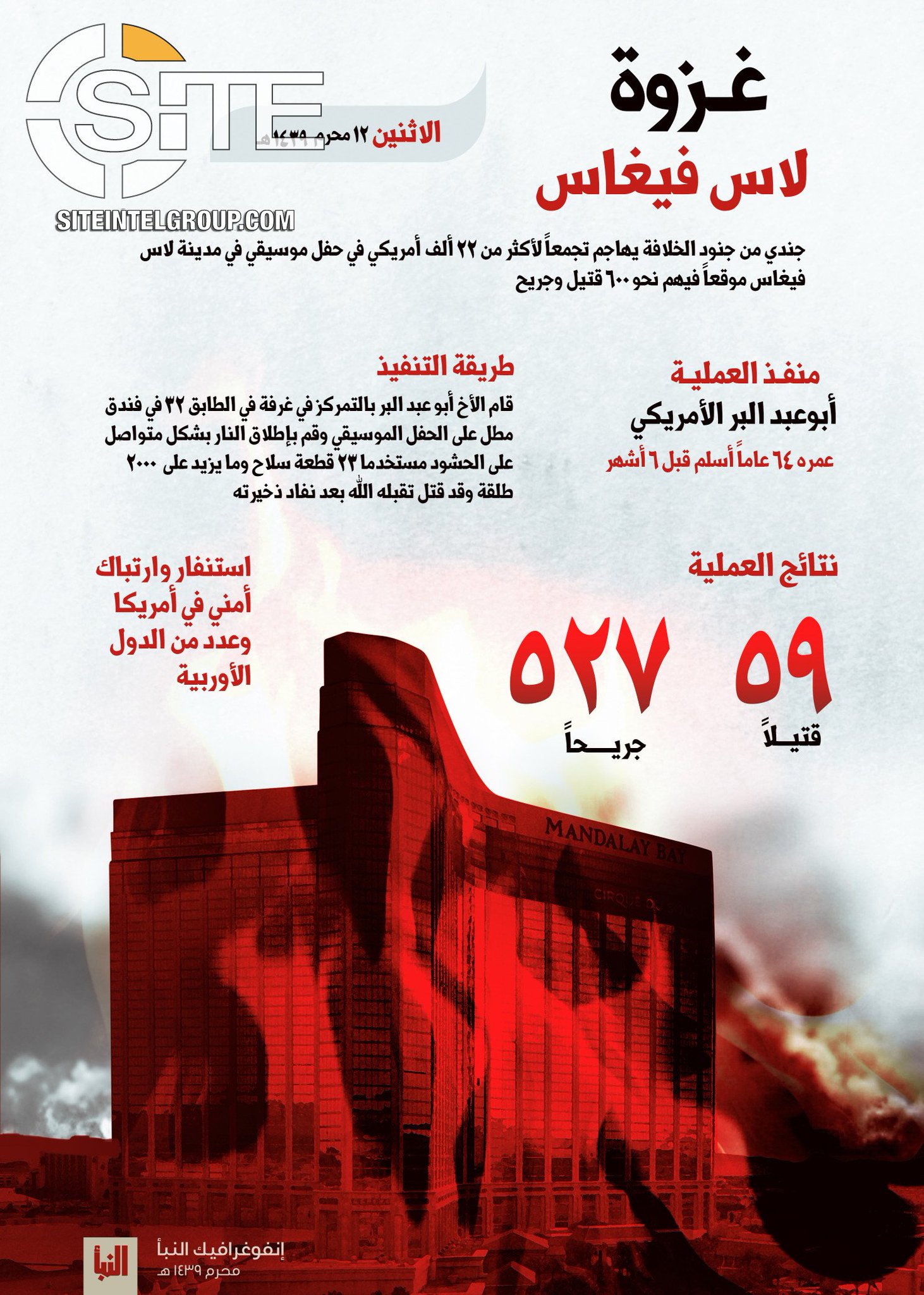 SITE Intel Group's translation of the above ISIS infograph is as follows:

A soldier from the soldiers of the Caliphate targeted a large gathering of 22,000 Americans at a concert in the city of Las Vegas, including nearly 600 killed and wounded

The executor of the operation, Abu Abdul Barr al-Amriki [al-Amriki = “The American”], 64-years old, converted to Islam 6 months ago

The brother Abu Abdul Barr stationed himself for the invasion on the 32nd floor of a hotel overlooking a concert, and opened fire continuously on the crowds using 23 guns and more than 2000 rounds, and died, may Allah accept him, after exhausting his ammunition

Results of the Operation

Some analysts are pointing to the surprising fact that ISIS has throughout the past years been fairly consistent and disciplined with its claims. They argue that the terror group's tripling down on prominently publicizing and claiming Paddock should give investigators serious pause to consider.

One of the more convincing arguments is from Rukmini Callimachi, the New York Times special correspondent covering ISIS, who seems to have changed her mind on the issue based on ISIS' latest publication. In a interview with NPR on Tuesday, she agreed with the interviewer who dismissed that ISIS could have actually been behind the attack, but now seems to have changed her mind, saying that it's wrong to reject the ISIS claims out of hand, but that there are significant reasons for believing it.

Callimachi issued her commentary in a lengthy tweet thread captured below, and her argument for not preemptively rejecting the theory is convincing:

"After ISIS claimed Vegas, I was waiting for them to release Naba, their weekly newsletter, to see if anything new emerged. Naba is out: Under a picture of the Mandalay Bay drenched in blood they rehash the attack, new info: They are now claiming shooter converted 6 months ago while ISIS earlier said shooter converted "months ago." Now they're saying it was 6 months specifically. No proof is provided, but ISIS has rarely claimed attacks that were not by either their members or sympathizers. ISIS members meanwhile are pointing out that after ISIS downed Metrojet over Sinai, no one believed them: In their chat rooms, they are claiming that the West and the media is leading a cover-up in order to hide the "martyrdom" of their brother.

I don't take ISIS' claim at face value, and so far, there's zero evidence tying this attack to ISIS which has emerged. But here's why I disagree with those rejecting it out of hand: I've been covering ISIS since 2014 and since then I have kept a timeline. Every time ISIS claimed an attack in West, I jotted it down, and I've gone back over the list & annotated what subsequent investigations found. My list is not complete but of the more than 50 cases I have annotated, I could only find 3 false claims. Yes, the group frequently exaggerates death tolls & yes, they inflate & distort details, but the crux of the claim is typically correct. The thing to understand is ISIS considers an attack to be their handiwork if the attacker is sent by them or if he is inspired by them.

The reason I don't buy the argument that they are now opportunistically claiming attacks to deflect from battlefield losses is as follows: Beyond the attacks they've claimed, there are many more they could have claimed but didn't. These are attacks where we know it was them: remember the Thalys train shooting? They never claimed it though the attacker shared a hotel room with Abdlehamid Abaaoud, leader of Paris attack. Remember the attack on the Jewish Museum in Brussels? Attacker was one of ISIS' jailers who held European hostages, yet they never claimed. Do you remember the devastating attack on the Istanbul airport last year? Investigation determined it was ISIS, but again they did not claim. And one day before Vegas on Saturday, a guy who'd placed ISIS flag on his car's dashboard used it to ram police. Did ISIS claim it? Nope.

Does this mean ISIS had a role in Vegas? There is as yet zero evidence of that. My point: This group has been more right than its been wrong."