Empire-Destroying Wars Are Coming To America Under Trump - Part 1

There are a variety of reasons Trump supporters voted the way they did in November, but one clear message many found attractive was the idea his administration would be driven by an “America First” doctrine.

America first meant a lot of things to a lot of different people, running the gamut from economic populism and immigration, to an avoidance of barbaric and costly overseas wars. The economic populism part was the biggest ruse from day one, a betrayal which (as we had seen under Obama) became undeniable as soon as he started appointing lifelong swamp-dwelling billionaires and Goldman Sachs partners to run his administration.

Irrespective of who you elect, Wall Street runs the empire, as Trump proved once again.

The coming massive pivot when it comes to destructive wars abroad will take a little longer, but the writing’s been on the wall for months. I’ve published several posts on the topic, with the most popular one titled, Prepare for Impact – This is the Beginning of the End for U.S. Empire.  Here’s an excerpt:

This is not the sort of thing you see in a confident, brave, and civilized nation, it’s the sort of stuff you’d expect to see toward the end. It’s the stuff of craven war-mongers, of dishonest cowards, of a totally deranged and very dangerous media. The signs are everywhere; imperial decline is set to accelerate rapidly in the coming years…

Expect more of all the above as the U.S. empire enters its most devastating phase of collapse. Think about what it might mean for you and your family and prepare accordingly.

When I compare who Trump currently has advising him and who he’s getting closer to, the future looks increasingly ominous. This is especially true when it comes to the Iran nuclear deal. Irrespective of what you think of Secretary of State Rex Tillerson and Defense Secretary James Mattis, these two look like a couple of the most sane humans on earth compared to some of the others Trump’s cozying up to. I alluded to this earlier today on Twitter.

You think Tillerson and Mattis are bad?
Wait until Cotton and Haley are in charge.
Empire destroying wars are coming.

The key event I believe will set the groundwork for a coming disastrous confrontation with Iran, is Trump’s highly anticipated announcement that the Iran nuclear agreement is against U.S. interests. This wouldn’t immediately end the deal or lead to new U.S. sanctions, but it would represent the first step in heading in that direction. A direction I believe will ultimately lead to US aggression against Iran in a similar fashion as Iraq, except this miscalculation will have even more disastrous consequences for the American empire.

Before we go any further, it’s important to understand what’s going on with regard to Iran and who now has Trump’s ear on foreign policy. Let’s start with some color from a recent New York Times article:

President Trump is expected to overrule his top national security advisers and decline to certify the Iran nuclear agreement, according to people who have been briefed on the matter, a decision that would reopen a volatile political debate on Iran but is likely to leave in place the landmark deal negotiated by the Obama administration.

By declining to certify Iran’s compliance, Mr. Trump would essentially kick it to Congress to decide whether to reimpose punitive economic sanctions. Even among Republicans, there appears to be little appetite to do that, at least for now.

Congress will have to decide whether to reimpose sanctions, which could sink the deal, or use the prospect of that to force Iran — and the other parties to the deal — back to the negotiating table to make changes in the agreement.

That is the approach favored by Senator Tom Cotton, Republican of Arkansas, who has emerged as a leading hard-liner on Iran and is working closely with the White House to devise its strategy. On Thursday, Mr. Cotton met with Mr. Trump to discuss Iran and other issues.

“Congress and the president, working together, should lay out how the deal must change and, if it doesn’t, the consequences Iran will face,” Mr. Cotton said in a speech on Tuesday at the Council on Foreign Relations. Reimposing sanctions, he said, would be a “backward-looking step.”

The deal is also contentious inside the administration. Secretary of State Rex W. Tillerson and Defense Secretary Jim Mattis have both urged Mr. Trump not to back out of it, in part because that would free Iran to begin producing uranium and reprocessing plutonium immediately, not after 13 years, as is stipulated in the agreement.

But Mr. Trump, after twice certifying the deal, has warned his aides that he would not do so again. As a result, the administration is looking for ways to claim Iran is in violation of the “spirit” of the accord, even if it has complied with inspection criteria. The International Atomic Energy Agency has said that Iran was in compliance; when it has found minor violations, they have been quickly fixed.

Tom Cotton is as dangerous a war hawk as exists in America today. In fact, the guy’s such a total lunatic, I’ve been warning followers on Twitter about him for years. Since most of you probably aren’t caught up on him, definitely take a moment to read the following article published by Alternet  in 2015, 10 Horrifying Facts About GOP Senator Tom Cotton.

We should probably go ahead and update this list as it didn’t even mention how Cotton claims the U.S. has an “under-incarceration” problem even though it has only 5% of the world’s population, yet 25% of its prisoners. Seems like a swell guy.

Jokes aside, Tom Cotton might actually be the most dangerous person in the entire U.S. Senate (which is saying a lot), so the fact he’s become so cozy with Trump on foreign policy is extremely dangerous. Indeed, he’s become so influential, Politico recently conducted an in-depth interview with him where he made his positions quite clear. Here are a few highlights:

This is a moment of truth for President Trump’s national security team. He is set to overrule both his secretaries of State and Defense on the Iran nuclear deal this week, declaring it no longer in the U.S. “national interest” in explicit contradiction to their public position. And if they don’t like it, Senator Tom Cotton says, then they should get out.

Cotton, who has personally advised Trump in recent days about the new Iran strategy he is set to release this week, stopped short of saying either embattled Secretary of State Rex Tillerson or Defense Secretary Jim Mattis should in fact resign. But his comments were nonetheless a striking acknowledgement of the giant rift that has opened up in the midst of the Trump team over foreign policy.

The interview with Cotton took place before this latest explosive twist, but even then it was clear a new rift of significance was opening up inside the Republican foreign policy world. I spoke with Cotton Thursday, the day after Tillerson’s unusual press conference to deny press reports he was considering quitting, and just a couple hours after Cotton was summoned to the White House for a private Oval Office meeting with Trump to discuss the Iran strategy. In the interview, Cotton did not really try to paper over the rift or offer the usual assurances that it would all be papered over. Instead, when I asked him directly whether there would be resignations, Cotton did not say there wouldn’t be, only that he did not believe they were “imminent.”

Because Cotton today is one of the few Senate Republicans who pay close attention to foreign policy who is still out there making Corker’s initial case for engagement with Trump, and he insists it’s paying off with substantive shifts in Trump’s thinking on subjects as varied as how to deal with Russia and the continuation of the war in Afghanistan.

Until now, Trump has shied away from outright confrontation with the experienced hands he’s hired to oversee his national security policy. But the Iran deal now seems to have finally forced a public rupture.

Cotton, who has repeatedly consulted with Trump and other top White House officials in recent days, appears to be on the winning side, pushing Trump to adopt the formula his administration has now settled on of refusing to re-certify the Iran deal to Congress but holding off – for now – asking Congress to blow it up by imposing new sanctions. Iran “is on the president’s mind right now, probably more than anything,” Cotton says, and he says he believes Trump will take the step of not certifying as a way to send “a very important signal to Congress and to our E.U. plus three partners and to Iran that this president is not going to abide by a disastrous nuclear deal.”

Cotton gave a lengthy address at the Council on Foreign Relations the same day as Mattis’ testimony taking the opposite view – and a link to it was soon tweeted out approvingly by an Iran deal hardliner inside the administration, U.N. Ambassador Nikki Haley.

I’m glad Nikki Haley came up, as she’s a certified grade-A maniac and bloodthirsty neocon. While she’s dangerous enough at the U.N., there’s talk that she could ultimately replace Tillerson as Secretary of State. Any combination of Cotton and Haley moving into increased prominence within the Trump circle of influence effectively guarantees more disastrous war in the Middle East. 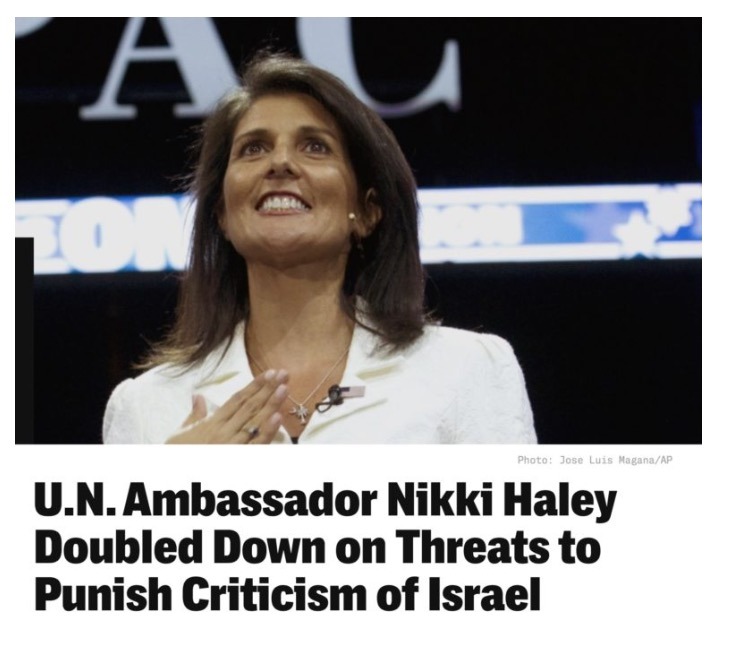 The writing’s on the wall and you can feel free to ignore it at your own risk. Beyond what I outlined in this piece, a key question is how will Trump sell the coming conflicts to his base, and what will the ultimate implications of the coming wars be? I plan to address both those things in tomorrow’s post.

In the meantime, if you liked this article and enjoy my work, consider becoming a monthly Patron, or visit our Support Page to show your appreciation for independent content creators.