Personal Recollections From The Crash Of 1987: "There Was No 'Smart Money' That Day!"

The following guest post is a first-hand account of the events surrounding the Crash of 1987 by JLFMI President, John S. Lyons.

Personal Recollections of the Crash of 1987 on its 30th Anniversary

“There was no ‘smart money’ that day.”

What do the assassination of President John F Kennedy, the beginning of Desert Storm and 9/11 have in common? Provided you are old enough to recall JFK’s assassination, the answer probably is that you remember exactly where you were on the day of those events. If not that old, there is most likely another event that is so memorable that you recall where you were and what you were doing at that moment.

Being in the securities business for many, many years, the Crash of ’87 on October 19th of that year is right up there with JFK’s assassination and 9/11 as one of the mind-numbing catastrophes I’ve witnessed.

In retrospect only, it was fortunate that I had entered the brokerage business in 1969 and immediately weathered a 36% market decline into 1970. On the heels of that decline, I then endured one of the worst bear markets in modern history in 1973-74 when the Dow Jones Industrial Average lost almost 50% of its value. As a result, I was weaned on risk in my new profession. And I learned early on that if a career that centered around the stock market were to be endurable, I had to find a way to practice risk management.

As a result, I developed a risk model during the 1970’s as a means of guarding against such disastrous losses in the future. Fortunately, the model has been of very valuable assistance, protecting clients from every major decline since its inception in 1978. Its Sell Signals have occurred prior to insignificant declines as well, but its risk avoidance guidance supersedes those times. On September 25th of 1987, for example, our model issued a Sell Signal and I sold over half of my clients’ holdings. I was reminded just recently by an associate of mine at that time about how he passed by my office that day and was amazed at the pile of sell orders on my desk.

The Friday prior to the October 19th crash ended with the first triple digit decline in the history of the Dow Jones Industrial Average. In total, the market lost just over 10% that week. The apprehension of professionals in the business was palpable to say the least as we entered the weekend and yet there was no seemingly immediate cause for a significant decline. I have learned that such unexplained declines are the most insidious. On Saturday night, at dinner with friends at a restaurant in Chicago, I could not eat my food!

On Monday morning, the market opened and headed south immediately. There were no buyers – just panic. Program trading, a technique supposedly providing insurance for portfolios in which computers entered sell orders at certain predetermined levels below the market, simply propelled the decline. Markets were in complete disarray. There were no bids. No one to fill the mountain of orders that were coming from all over the world. Traders left the pits crying as the carnage grew. It seemed like the end of the world – their world at least. And there was nothing stock brokers could do except watch in horror. Paradoxically, on the way home that night, the outside world was acting like nothing happened. That was no comfort.

The DJIA closed down 508 points or 22.6% that Monday, October 19th. To provide some perspective, that decline today would be the equivalent of a 5,176 point loss. The Nasdaq would have fared worse were it not for the fact that it completely failed and effectively shut down. Bid prices were often higher than asked prices. When asked what smart money was doing that day, one leading money manager admitted that “there was no smart money”.

Though most of the eventual decline was over by the close on Tuesday, the gut wrenching market action continued for the rest of the week. And its wreckage would last for weeks and months. First Options, the company charged with settling trades on the Chicago Board Options Exchange couldn’t function for weeks and had to be bailed out by its parent, the Continental Bank. Significant corporate mergers that were almost completed were canceled or at least became questionable. My only major problem during the crash – and it was a big one – was that I was selling puts on some merger candidates that were all but assured prior to the crash.

For example, I had sold hundreds of puts at a quarter of a point with a strike price of 40 on a company that was trading at the 52-53 level. All the company’s stock had to do was to close over 40/share and the puts would be worthless and the trade profitable. Instead, the stock dropped to about 37 which made the intrinsic value of the put 3. Unbelievably, they were bid at 18 for more than a week despite having negligible trading in them. Unbelievably as well, I was issued no margin calls on the positions for over two weeks due to First Options being in chaos. Unfortunately I eventually had to take sizable losses in them. In some other cases that I knew about, no margin calls were ever issued for some substantial unsecured debits. I recall one investor who had a deficit in his account of almost $250,000 and was never called to cover that amount!

When I say chaos, I mean chaos. Will it happen again? Although it is always claimed that we learn by our previous mistakes and take the appropriate steps to avoid the same problems in the future, history doesn’t bear that out. So called “reforms”, as well as proclamations such as that by Yale’s first Ph. D in economics, Irving Fisher, nine days before the stock market crash of 1929 that stock prices “reached what looks like a permanently high plateau”, are made with ultimately untimely confidence throughout history. Portfolio insurance during the ’87 crash was anything but insurance. Although it was embraced as risk management, it turned out to be risk fertilizer. Society in general always thinks that we have hit that new plateau in managing ourselves but unfortunately that is often quite the opposite. To me, the message is that we never should abandon employing some measure of risk management in investing and probably in most of our activities. So how is that accomplished?

Human Nature, The Stick in the Spokes of Risk Management

One of the phenomena that increasingly seems axiomatic is that human nature is the enemy of such risk management. The longer that one has gone without the need for caution, the more it is thought not to be needed when, in actuality, the more it is needed. This is due to a condition called perceptual recency, which simply stated means that one’s expectations of the future are the result of what one has experienced and is in their active memory. We are not good at anticipating junctures of change. That is understandable.

The following two charts show that we humans indeed clearly react to what has occurred in our memorable past. The higher we go and the longer we go higher, the more confidence we have that we will continue to go higher — and the less we feel the need for risk management. That eventually, and I repeat eventually, is injurious to one’s investing health. Note how the level of both household stock investment and consumer confidence continue to grow the higher the market goes. 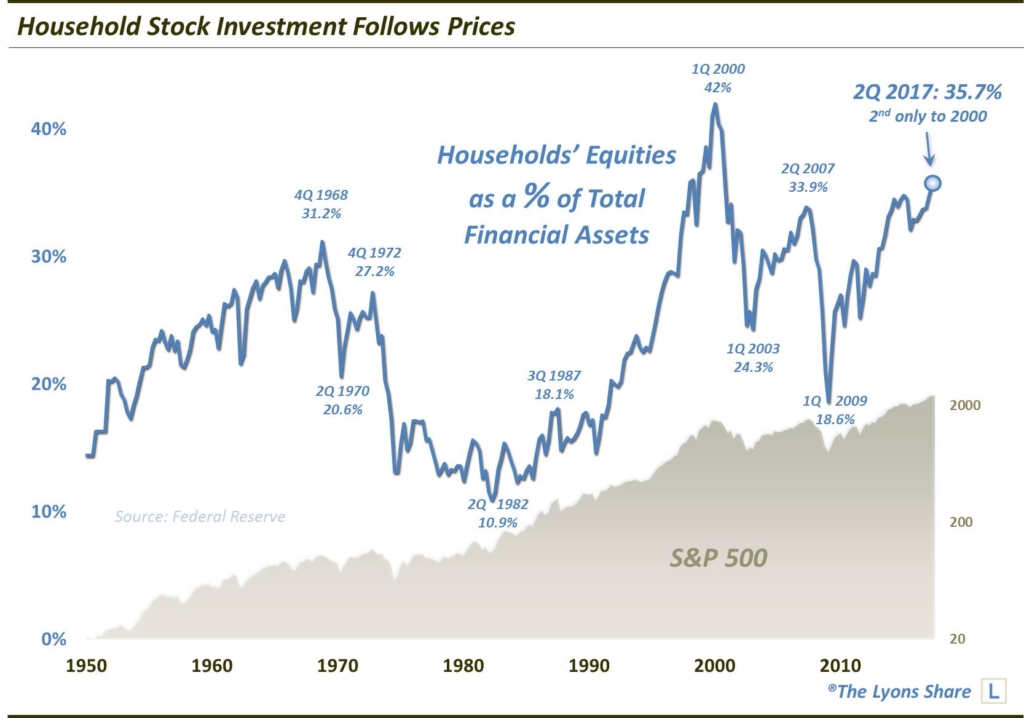 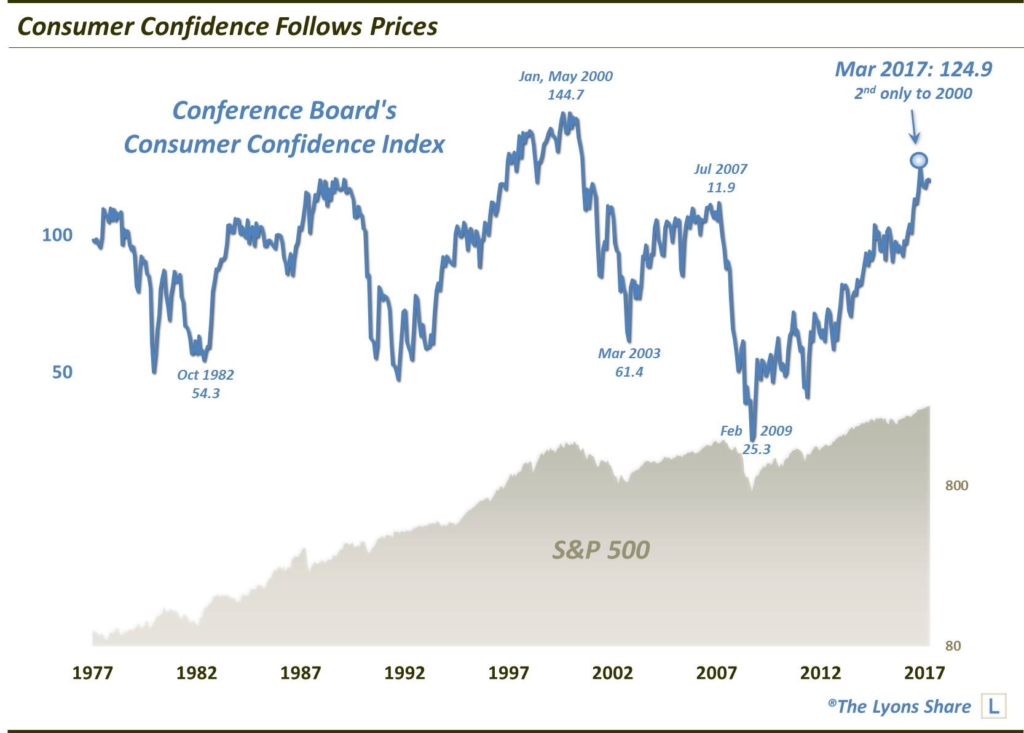 So, as asked, how do we guard against the human natural tendency to dismiss the need for risk protection the higher the market goes — and to become more bearish, the lower it goes? Frankly the answer probably is that most investors, i.e., humans, cannot. I have spent a career practicing human nature avoidance in my job. Now I will admit that there will be times when the market does not need risk protection and there will be other times when there appears to be substantial risk afoot as quantified by our 40-year-old risk model but the market chooses to ignore it and continue to move higher. However, like wearing a seat belt, you cannot possibly choose to employ caution only shortly before an accident.

As stated above, declines that are the most hurtful typically begin with no seeming warning or at least before any provocation is identified. For example, on July 30, 1990, our model issued a Sell Signal and we sold 100% of our clients’ holdings. On August 2, Saddam Hussein marched into Kuwait and Operation Desert Shield began — as well as a substantial decline in the stock market. Similarly, the completion of selling 100% of our clients’ holdings on account of a Sell Signal on September 4, 2001 was obviously done without any known external provocation. The lesson regarding employment of risk management is that, no, you will not know when to sell by just “having that feeling” or even more remotely, by getting tipped off by the news in the morning paper. That said, many investors do believe that they will know when to protect their holdings.

Now of course, there will be legions of market experts, many with an investment product to sell, who will say it is foolishness to even try to “time the market” as they put it. I will admit it is difficult to find a good practitioner of avoiding risk. However, one must try. Failing to avoid a substantial market decline is a double whammy. It is well quantified that losing money has twice the negative emotional impact vs. the pleasing emotional impact derived from making money. That emotional jolt on the downside is what contributes to selling at the bottom (one whammy) and makes you divorce Wall Street until it is well into its next bull phase (a 2nd whammy).

So what was learned from the Crash of ’87? Not much in my opinion. For starters, the laws of human nature have yet to be repealed. Additionally, high frequency trading is today’s version of program trading. Only now, instead of transmitting an order through a stock broker, who sends it to a floor broker, who give it to a trader, who takes it to a specialist at the post where the stock in question is trading, high frequency computer generated orders are automatically entered at the behest of complex algorithms and are executed and reported back in milliseconds. Witness the May of 2010 “flash crash” where the market lost about 1000 points and then mostly recovered all within 15 minutes.

In summary, risk cannot be removed from the stock market. The Crash of ’87 affected everyone. Crashes will occur again. Wear a seat belt!

If you’re interested in the “all-access” version of our charts and research, we invite you to check out our new site, The Lyons Share. TLS is currently running a 30th anniversary 1987 Crash Commemoration SALE, offering a discount of 22.6%, or the equivalent of the Dow’s 1-day drop 30 years ago. The SALE ends October 22 so considering the discounted cost and a potentially treacherous market climate, there has never been a better time to reap the benefits of our risk-managed approach. Thanks for reading!