Is This The Best Way To Bet On The Fed Losing Control Of The Bond Market?

Lately, one of my biggest duds of a call has been for the yield curve to steepen. Sure, I have all sorts of fancy reasons why it should steepen, but reality glares back at me in black and white on my P&L run. Sometimes fighting with the market is an exercise in futility. 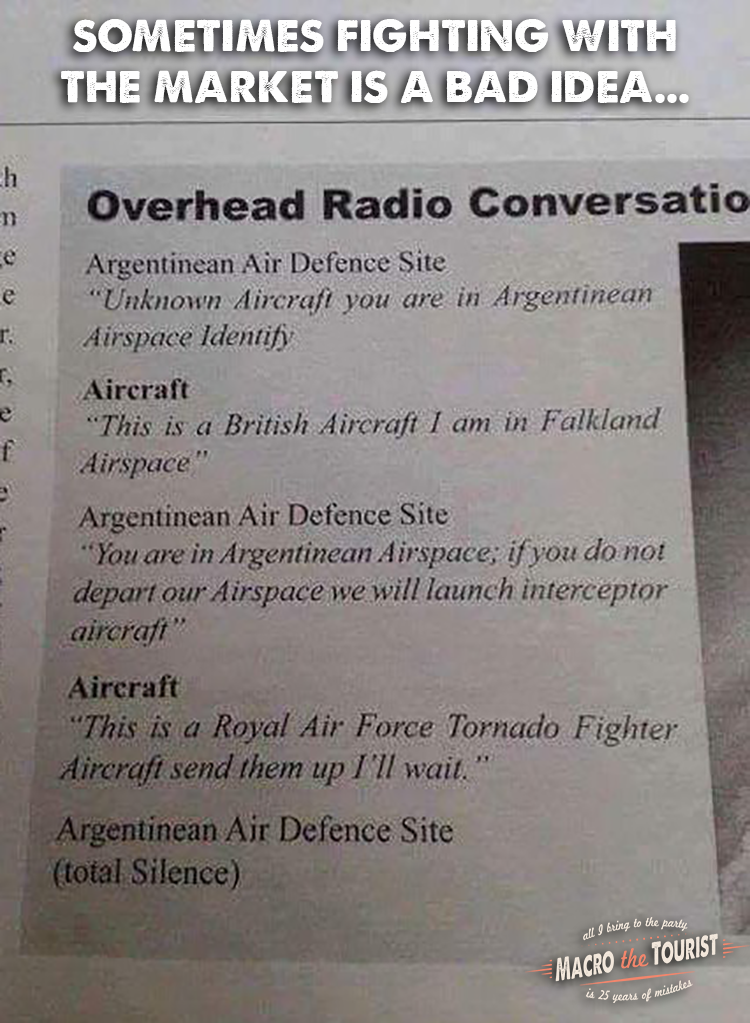 Now I know many of your eyes glaze over when I start talking about different parts of the yield curve flattening or steepening, but I urge you to stick with me, as the fate of the curve might end up being central to the next financial crisis. Yield curve talk is usually only exciting to propeller twirling bond geeks, yet there well might come a day when the 2-30 year Treasury yield spread is plastered across the front page of USA Today.

And it’s not just me that thinks yield curve steepening trades are the next little-noticed-financial-time bomb in-the-making. Business Insider has recently reported that the discreet monster macro hedge fund run by Alan Howard is launching a new fund set up to bet on a steepening yield curve.

The fund, called the Brevan Howard CMS Curve Cap Master Fund, will be led by senior trader Rishi Shah, who has been with the firm since 2010 in Geneva and New York, according to documents seen by Business Insider.

The new fund will use what are called constant maturity swap curve caps to bet on both a steepening of the US yield curve and an increase in curve volatility.

Interest rate policy and government bond buying have combined to both flatten the curve and reduce volatility.

Brevan Howard is betting that’s going to reverse as central banks start to shrink their balance sheets and uncertainty over the leadership of the Fed circulates.

Until I read about this fund, I had not heard of any hedge funds setting up single purpose vehicles to bet on a steepening of the yield curve. Sure over the past couple of years, there were plenty of guys warning about a repeat of the 2008 credit crisis. Whether it was Carl Icahn’s Danger Ahead, or any one of the hedge fund monthly letters to investors, there were no shortage of end-of-the-world deflationary collapse calls (and the corresponding funds to profit from this “inevitability”.) Yet there were precious few warning about inflation. Whereas most hedgies were advocating hiding in long-dated sovereign paper, Brevan Howard seems to be taking the exact opposite tack. All I can say is, come ‘on in - the water’s warm!

And here is a question for you. Do you think the best bet for the next financial crisis is a repeat of the last one? Or could it be that the little-talked-about more obscure risk that just a handle of smarter guys are setting up for is a better candidate? Well for me it’s no contest. Slick youtube presentations warning about Danger Ahead (that looks exactly like the Danger Behind!) are like an investor in 2007 warning about tech stocks because the 2000 DotCom crash was still ringing in their head. Sure, tech stocks went down in the Great Financial Crisis, but they weren’t the center of the problem like the previous time. So, all I can say is sold to them. I am going to go with smart shrewd guys like Brevan Howard that are willing to think about the next problem instead of focusing on the last problem.

But let’s face it, so far the yield curve steepening prediction has proved to be nothing but a world of pain. 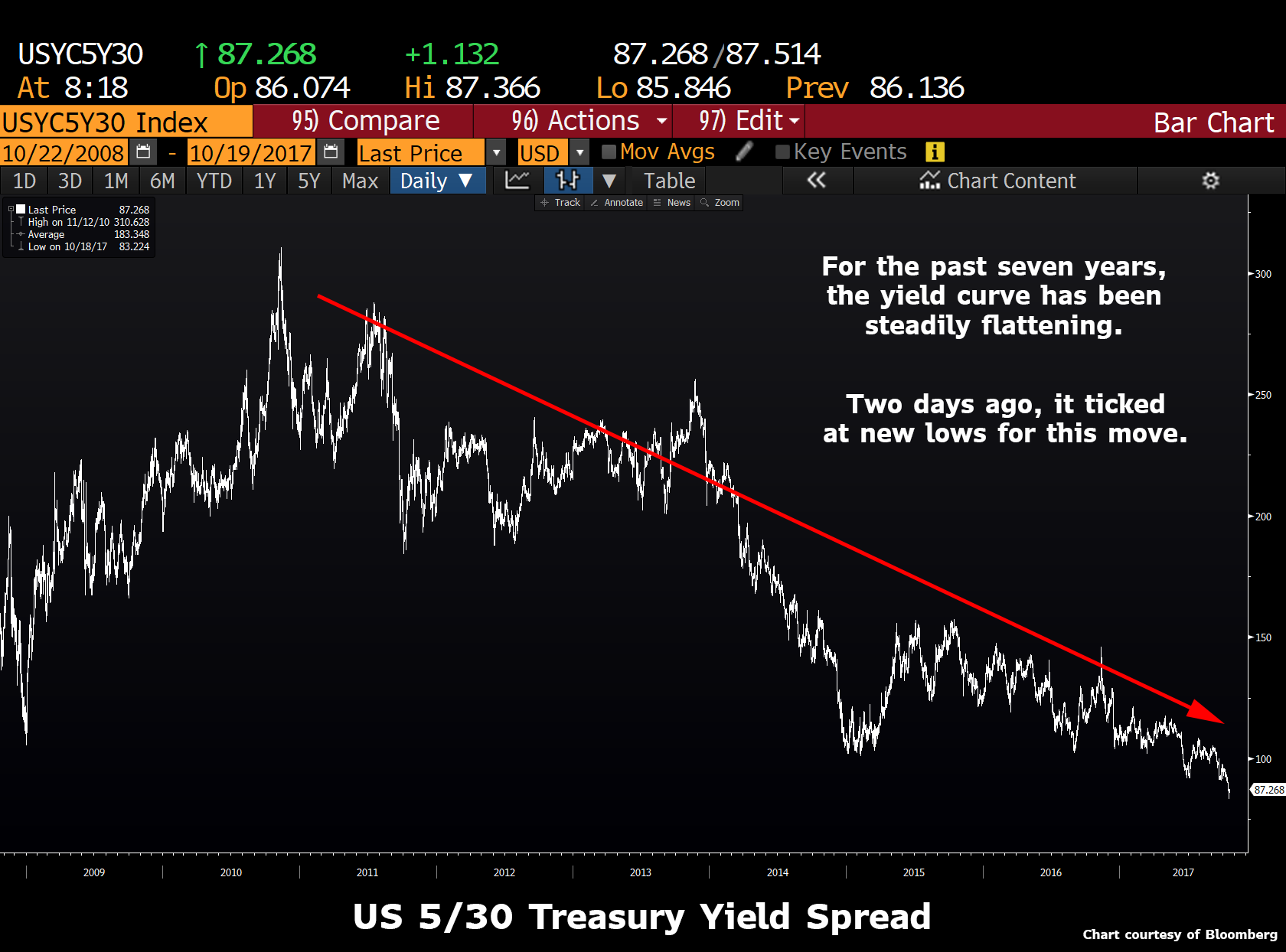 Ever since the 2010’s scare that quantitative easing would cause run-away-inflation dissipated, the yield curve has been steadily flattening. US 5 year yields have been rising, while the 30-year yield has been declining.

Yet what does this mean? Economic bears often use the flattening of the yield curve as a sign that the economy is about to collapse. But I must to admit to getting a chuckle from a recent twitter exchange between Bloomberg reporter Luke Kawa and George Pearkes from Bespoke Investments: 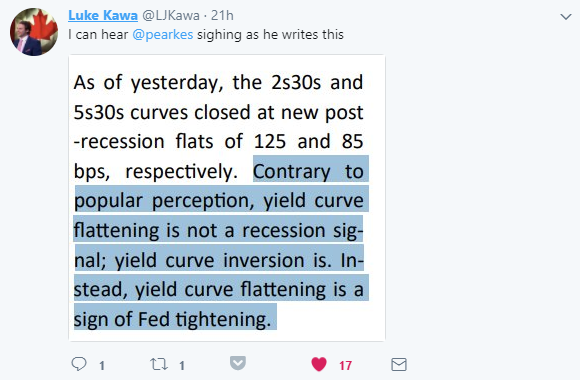 Here is a chart of the 5-30 year US treasury yield spread over the last thirty years. 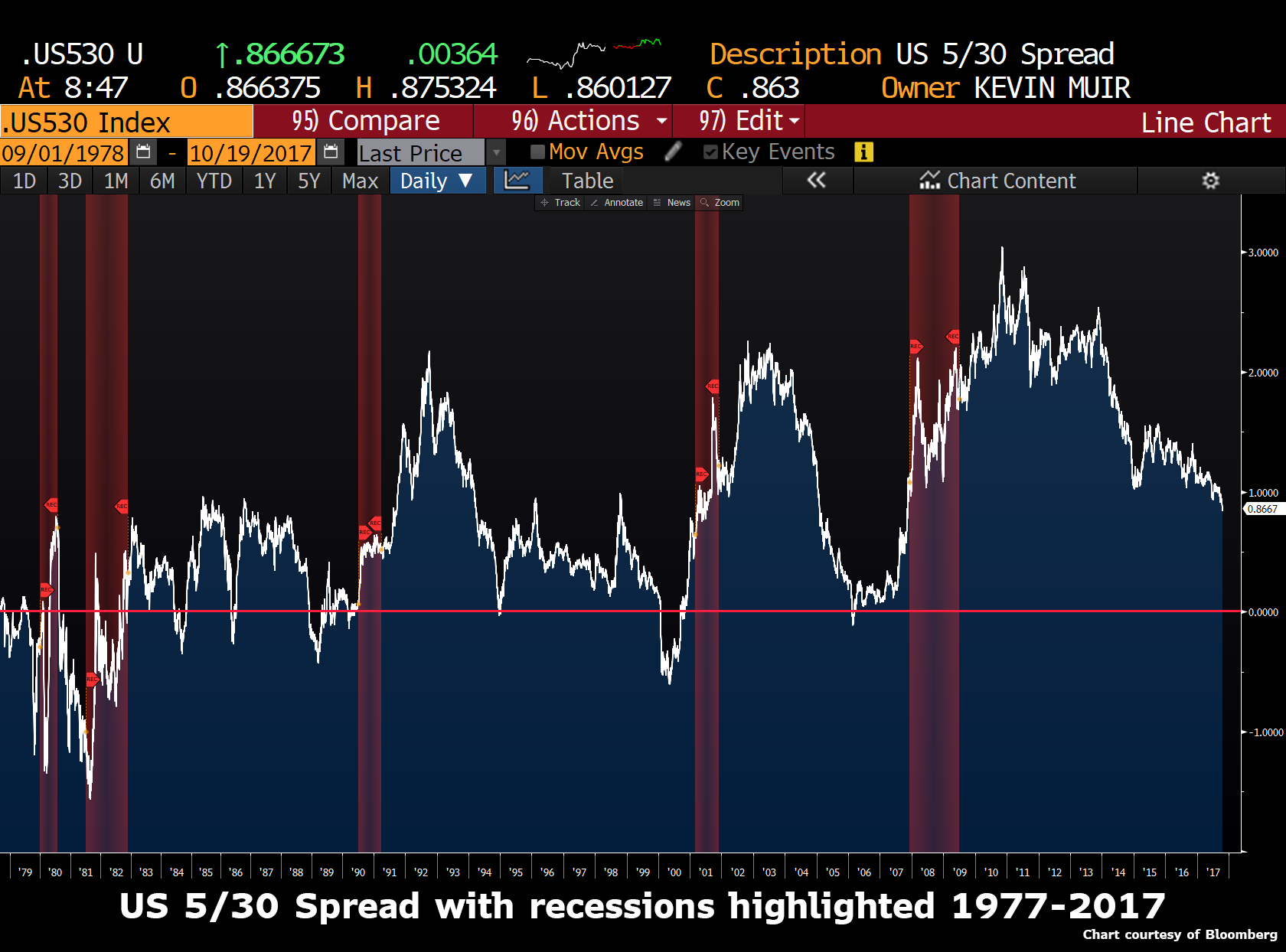 I have highlighted recessions in red. Over the past few decades, a pattern becomes immediately obvious. The yield curve flattens as the Fed tightens, until they reach 0%, then a recession ensues, and by the time it is officially recognized, the yield curve is already screaming wider.

But this raises all sorts of questions for yield curve steepener bulls, with most of them surrounding timing.

Every recession of the past three decades has been preceded by the curve inverting (short term rates rising above long term rates.) Is this an immutable law? Are the curve steepener bulls (like me) way too early? Or does the pile of QE throughout the globe distort bond yields and make the previous reliable signals obsolete?

My head tells me this time is not different (it never is), but my gut worries that since the GFC (Great Financial Crisis) many rules that previously worked so well need to be tossed out the window.

Japan has long been a decade ahead of the rest of the developed world with their financial problems, and if we have a look at the JGB yield curve, it is clear that it has become so distorted that it fails to give clear-cut signals. 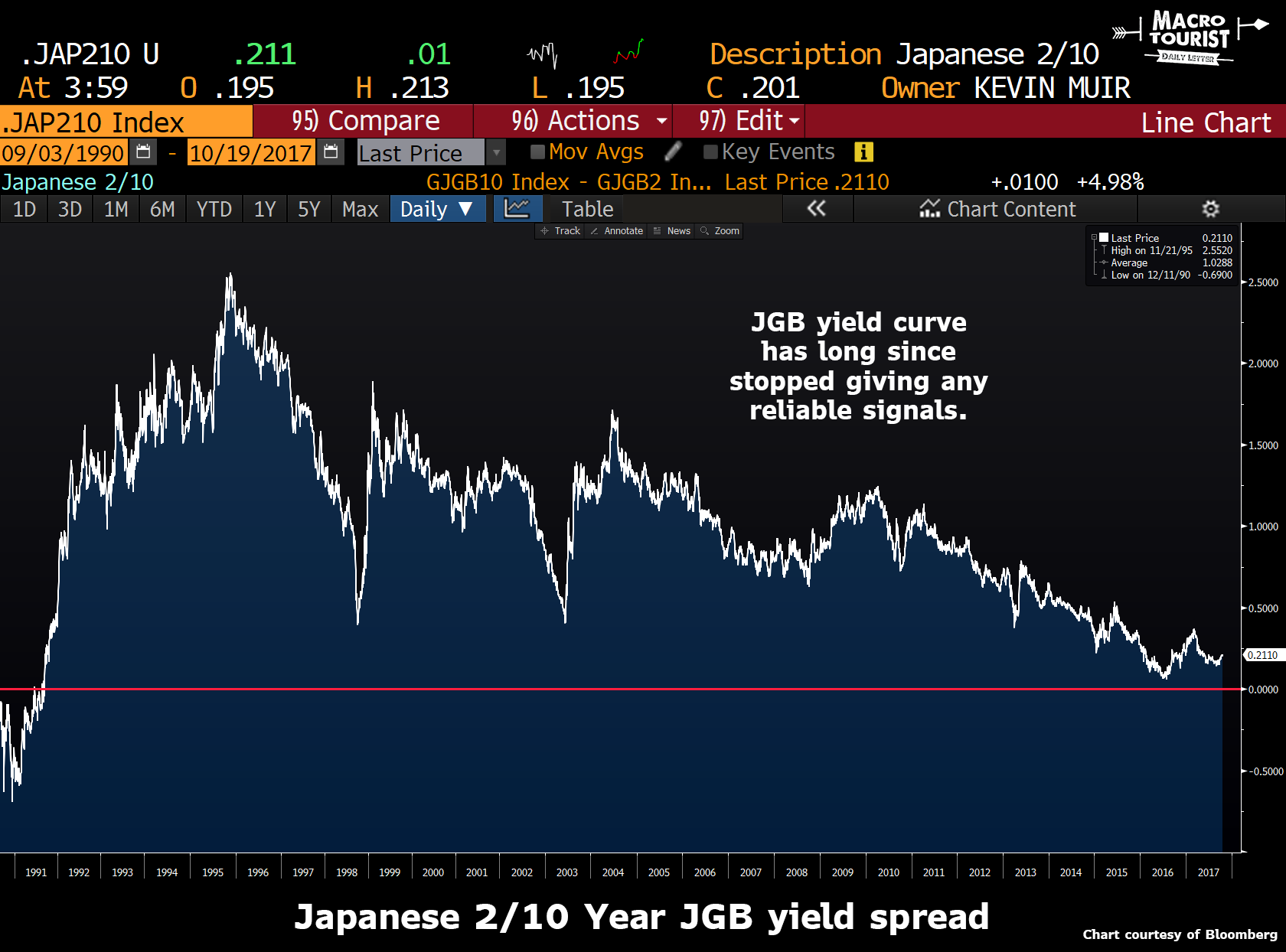 Contrary to all the ominous calls from hedge funds, the JGB market has not shit the bed. In fact, for the longest time, it was one of the best performing bond markets in the world.

So maybe instead of some sort of yield curve rip, the US will experience the same sort of decade-long drip lower. It’s not out of the realm of possibility, and it would certainly be the sort of market action that is being anticipated by the legions of hedge funds who are predicting a 2008 credit crisis repeat. In a deflationary crunch, a flattening of the yield curve down to 0% would be expected.

Yet when Japan first experienced their balance sheet recession, they were alone. Now the whole developed world is faced with similar circumstances. Everyone is struggling with limited growth, over-indebted balance sheets and limited inflation. Quantitative easing use to be a solely Japanese phenomenon, but now most every large developed market Central Bank has embraced the blue tickets. And not only that, but some Central Banks, like the Swiss National Bank, have expanded their asset buying into some truly bat-shit-crazy CUSIPs.

The amount of money that has been stuffed into the financial system over the past decade has been unprecedented. Just within the Big 3 Central Banks (Fed, ECB and the BoJ), their total balance sheet has swelled from under $4 trillion to over $14 trillion! 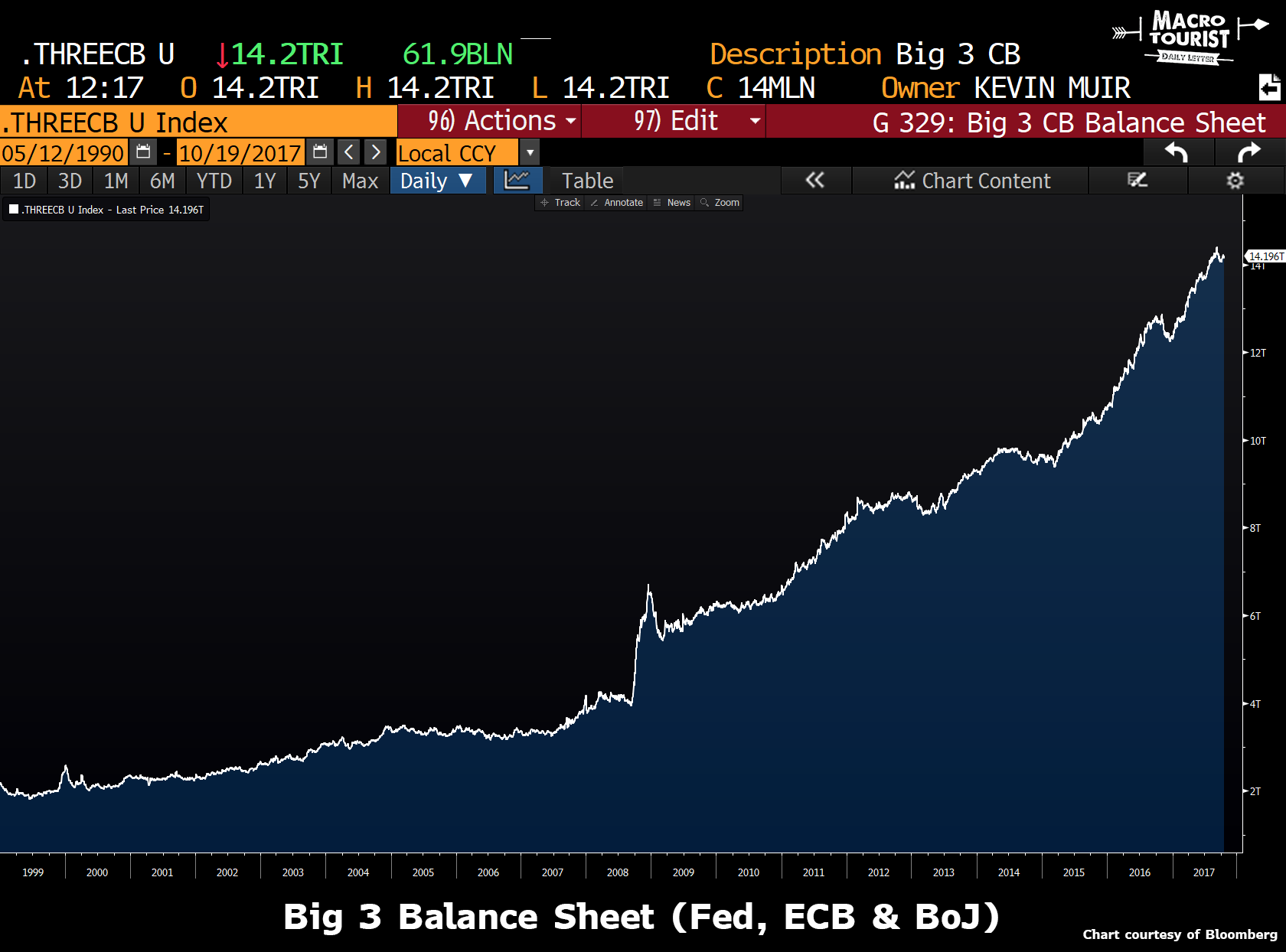 So yeah, I am sympathetic to the argument that this time is different. And although I am not sure about the timing, I do believe the way this game ends is how my favourite Central Bank skeptic, Bill Fleckenstein, says, “they will keep printing until the bond markets take away the keys.” All economic slowdowns, or notable market corrections, will be met with more printing, so it isn’t until that response causes the bond market to go down, will anything change.

And ultimately that’s what Howard Brevan and all these other curve steepener bulls are betting on. The yield curve steepener is just a terrific way to express the view that the Fed loses control of the bond market.

It is obviously more nuanced than that, but I think that’s the long-term bet. Either inflation rears its ugly head, or the economy rolls over hard, and the Fed needs to keep short rates much lower than long rates. Out of the two possibilities, inflation is one that is tougher to control. But even the economic roll over is scary as it might be met with even more aggressive money printing.

I think it’s just a matter of timing. Shorter term, the Fed will keep tightening until they break something. Will that take the 5-30 spread down to 0? I don’t know. That’s above my pay grade.

But over the longer run, Central Banks will keep printing until they achieve their desired inflation. In fact, I suspect it will most likely be a case of “be careful of what you ask for - you might get it - good and hard!”

I realize I haven’t given you an answer of whether you should buy steepeners today. The trader-in-me says this flattening has gotten way ahead of itself, and we might be due for a good bounce, yet it will simply be another selling opportunity. But the investor in me says that we have never had such a long term terrific set up for owning steepeners.

Central Banks desperately want inflation, governments are faced with increasingly disillusioned citizens, and printing and spending their way out of this problem has never been cheaper. Not only that, if the inflationary fires are finally lit, the monstrous debt will severely handcuff Central Banks from raising rates. Do you really envision a situation where inflation is running at 4% and the Fed inverts the yield curve by raising short-term rates to 6% to slow down the economy? That sort of interest rate will bankrupt both the government and the citizens. Nope, it ain’t going to happen.

I will leave you with one final thought. For all those who think the economy will descend into a deflationary black hole, how many countries have collapsed because of falling prices? And how many have had their currency inflated away? At the end of the day, the steepener bulls are just betting on history repeating. Before this is all through, the yield curve will trade at record wides. I could easily see the short end at 2% and the long end at 8% or 10%. I know that seems extreme, but so did the idea of housing falling on a nationwide basis.

Now if someone could just help me with the timing… That would be much appreciated.

Why not trade the ultras?

The other day after writing one my mistimed bullish pieces on the yield curve, I included a screenshot of the hedging ratio for the futures. One of my sharper readers sent me a note asking why I didn’t use the Ultra bonds instead of the long bond futures. 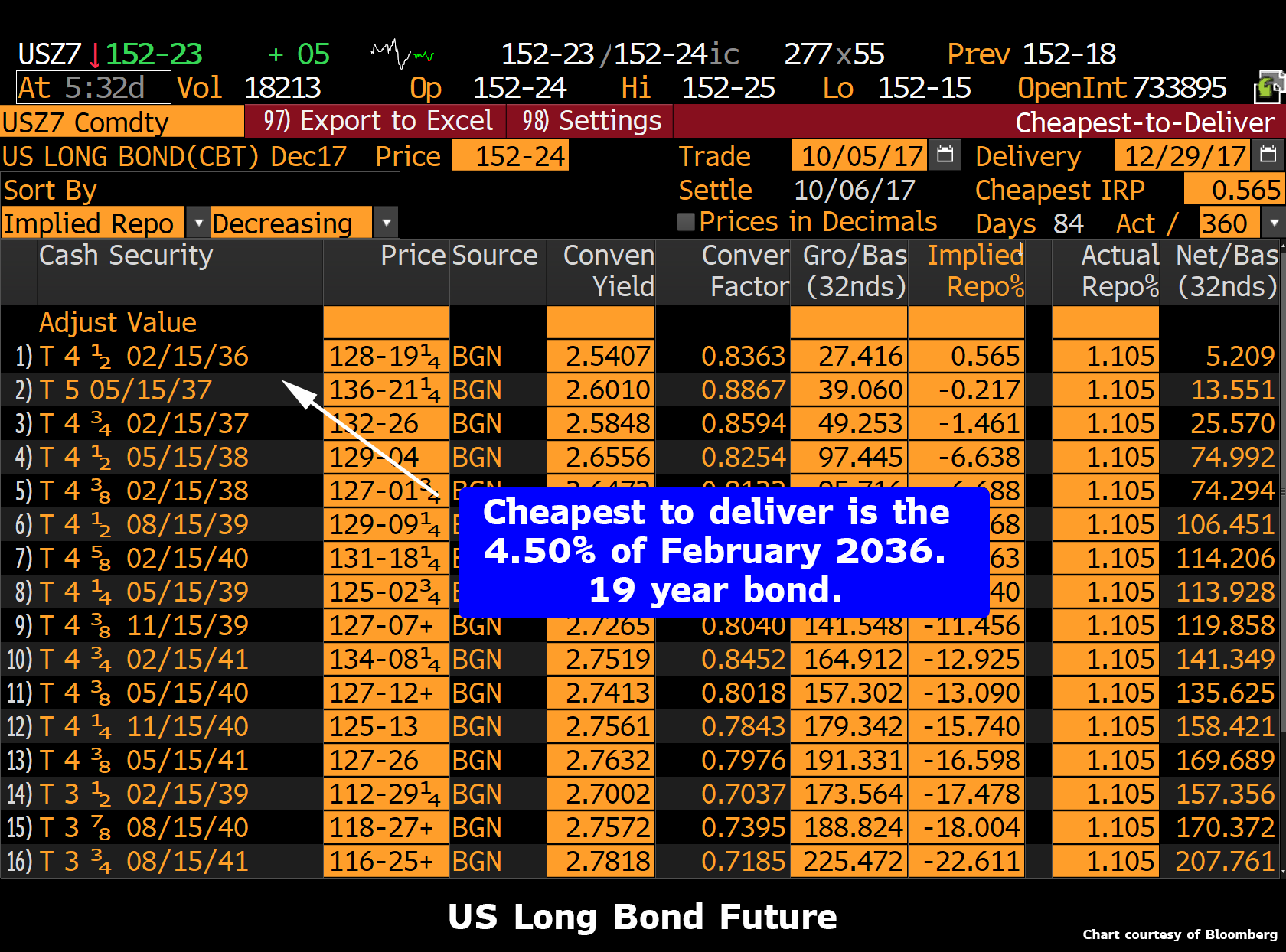 The long bond future’s cheapest-to-deliver has a maturity of 19 years. 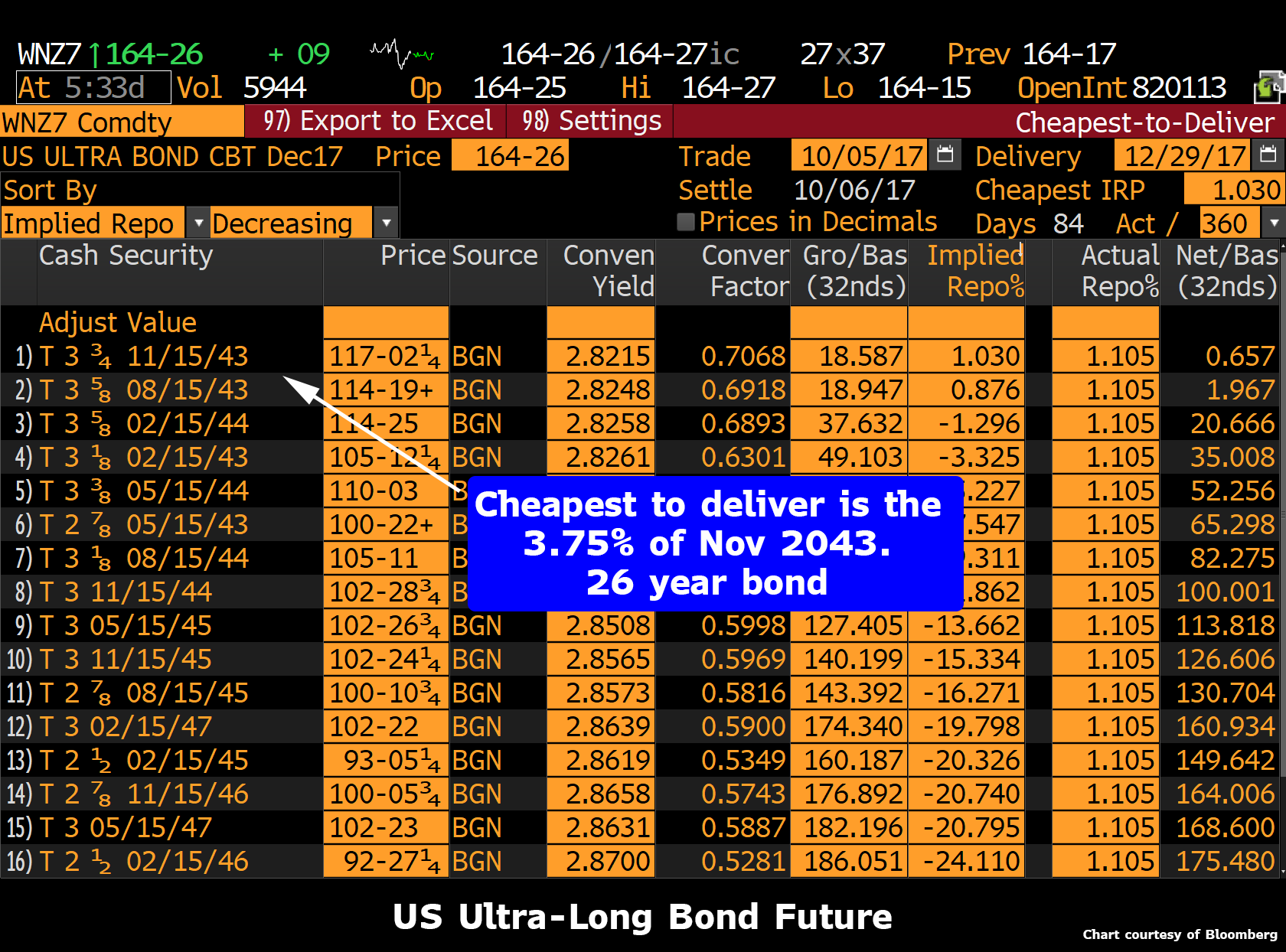 Whereas the ultra-long bond has a cheapest-to-deliver of 26 years. Not perfect, but much better.

So here is the new hedging ratio screen for the five year future versus the ultras. 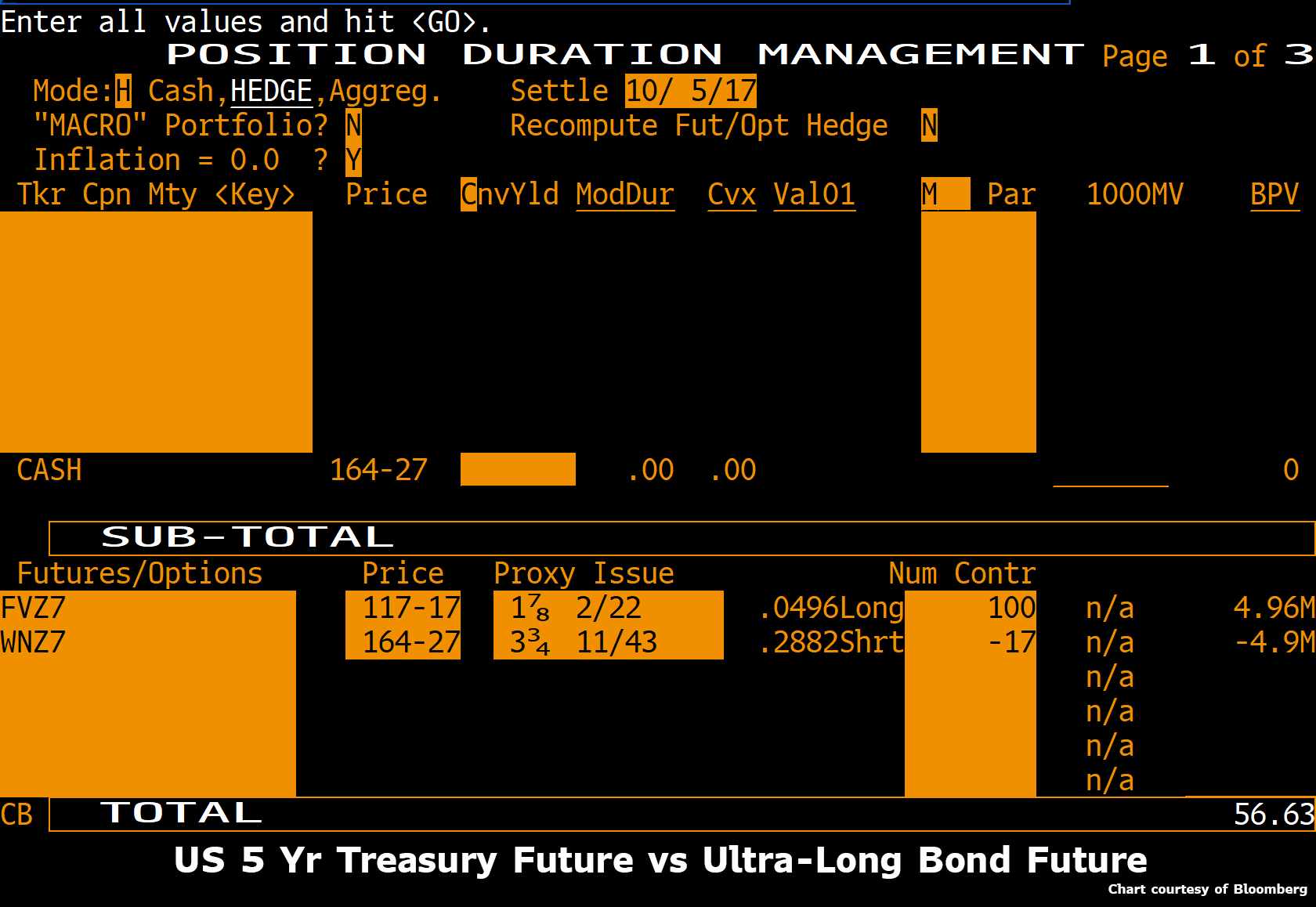 If you’re going to get in trouble buying the steepener, might as well do it right!