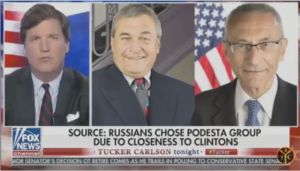 The former executive who has been "extensively" interviewed by Mueller's team, said the FBI probe is now focusing on people in Washington who have worked as de-facto operatives on behalf of Russian government and business. To that end, Carlson's source made several shocking claims about Paul Manafort and the Podesta Group peddling Russian influence throughout Washington D.C. - focusing primarily on access to the Obama administration, and heavily involved with the Clinton Foundation and the Uranium One deal.

"They are more focused on facilitators of Russian influence in this country than they are on election collusion," Carlson's source told Fox.

To be clear, a former long-time executive of the Podesta Group has told Robert Mueller's team the following (and more):

"Tony Podesta was basically part of the Clinton Foundation," Podesta Group may be concealing financial transactions through art collection. pic.twitter.com/yyyo57THMJ

See the entire monologue below:

While many aspects of Manafort's Russian ties are still unclear, one has to wonder how he became Donald Trump's campaign manager, and why he was suddenly fired from the position after less than three months on the job - two months before the election. Was Manafort pitched to Trump to leverage his vast DC connections, only to be fired after the scope of his involvement with Russia was revealed? Or was Manafort ejected when the left began the Russian witch hunt?

As iBankCoin previously reported, the Podesta Group was subpoenaed in late August along with four other public relations firms who worked with former Trump campaign manager Paul Manafort during a 2012-2014 lobbying effort for a pro-Ukraine think tank – the European Centre for a Modern Ukraine (ECMU) – tied to former Ukrainian president Viktor Yanukovych.

Yanukovych fled from Ukraine to Russia after he was unseated in a 2014 coup.

Two of the subpoenaed firms include Paul Manafort’s Mercury, LLC and the Podesta Group.

Visitor logs reveal that Tony Podesta visited the White House at least 114 times during the Obama administration, and was said to have had ‘special access‘ to the administration through his brother, John Podesta, while lobbying for various pro-Kremlin interests.

During a 2015 interview with CNN’s Fareed Zakaria, former president Obama admitted that his administration ‘brokered a deal‘ for the 2014 coup in Ukraine – all while John Podesta was a West Wing advisor and Tony Podesta lobbied for an organization which opposed the coup.

Uranium One and Joule Unlimited

The Podesta group earned $180,000 (add up the years from 2011-2015)lobbying for Russian-owned mining company Uranium One during the same period that the Clinton Foundation was receiving millions from UrAsia / U1 interests.

Last week, two bombshell reports published by The Hill revealed that the FBI – headed by Robert Mueller at the time – discovered that “Russian nuclear officials had routed millions of dollars to the U.S. designed to benefit former President Bill Clinton’s charitable foundation during the time Secretary of State Hillary Clinton served on a government body that provided a favorable decision to Moscow” – a deal which would grant the Kremlin control over 20 percent of America’s uranium supply, as detailed by author Peter Schweitzer’s book Clinton Cash and the New York Times in 2015.

So - after Russia took control of the Uranium, the Podesta Group received $180,000 to lobby for Uranium One during the same period that the Clinton Foundation was receiving millions from U1 interests, and after Russia took majority ownership in the “20 percent” deal (source – you have to add up the years).

And now, a former Podesta Group executive tells the world that the real Russian collusion story starts with Paul Manafort and the Podesta Group and ends with Hillary Clinton and the Obama Administration.