I know I must sound like a broken record by now, but Wall Street owns the U.S. economy and until that’s dealt with, the American public will continue to be preyed upon voraciously and lawlessly by some of the most unethical parasites the world has ever seen. Obama was a historical disaster on this issue, coddling and protecting banker oligarchs every step of the way. Trump’s no different.

The latest evidence that things are getting even worse came last evening when the U.S. Senate voted to deliver Wall Street another gift on a silver platter.

Rather than summarize what happened, let’s turn to two of the best resources on such topics, journalist David Dayen and finance focused website Wall Street on Parade.

First, here are a few excerpts from David’s latest article published at The Intercept, After Day of Feuding, Jeff Flake and Bob Corker Join Trump to Upend a Major Consumer Protection:

With national attention focused Tuesday morning on a mushrooming feud between President Trump and Sen. Bob Corker, R-Tenn., followed by a feud in the afternoon between Trump and Sen. Jeff Flake, R-Ariz., the Senate gift-wrapped the biggest present Congress has so far bestowed upon Wall Street in the Trump era.

With a razor-thin margin, the Senate passed a resolution to nullify a signature regulation from the Consumer Financial Protection Bureau, which banned forced arbitration provisions. Such clauses, tucked into the fine print of contracts that nobody reads, deny consumers the ability to contest claims through a class-action lawsuit, and can allow banks and other financial institutions to rip off their customers with virtual impunity.

Both Sens. Corker and Flake, along with Sen. John McCain, R-Ariz., joined in the effort to give Trump a major win, even if it will hurt many of his own voters. Consumer advocates had hoped that moderate Republicans Lisa Murkowski of Alaska and Susan Collins of Maine would block the GOP effort. They did not.

The vote was split 50-50, which required Vice President Mike Pence to break the tie.

How’s all that MAGA working out for you?

To secure his victory, Trump enlisted an ex-Wells Fargo attorney, Acting Comptroller of the Currency Keith Noreika, and  a former bank CEO, Treasury Secretary Steve Mnuchin, to do the dirty work. The Senate vote came a day after Treasury entered the fray with its guns blazing.

The House passed its version of the resolution within just a couple weeks of CFPB finalizing the rule in July. But continuing reports of petty consumer fraud at Wells Fargo, and a data breach of over 140 million customer accounts at the credit reporting bureau Equifax, made it difficult for the Senate to proceed. Both Wells Fargo and Equifax have attempted to use arbitration clauses in their financial contracts to force victims out of class-action litigation.

The scandals put a human face on the practice of companies forcing customer disputes through a secret, non-judicial process.

And consumers typically don’t fare well in arbitration. An Economic Policy Institute report showed that consumers only win 9 percent of arbitration cases, and banks almost always win when they issue counter-claims, with the consumer paying $7,725 on average.

This is why corporations like the arbitration process – it prevents those wronged from pursuing their legal rights and in practice alters the law by making small claims virtually unenforceable. In other words, arbitration clauses are a license to steal. And it contributes to a fundamental breakdown of the justice system, where complaints can only be heard in a privatized setting.

So in July, in a rare instance of government using an outright ban instead of requiring disclosure or some other half-measure, CFPB finished a rule preventing arbitration agreements in financial contracts from stopping consumers who band together with other victims in a class-action lawsuit. But Republicans managed to twist the issue into one where corporations needed to be protected from greedy trial lawyers.

First, Office of the Comptroller of the Currency head Keith Noreika, himself a former defense lawyer for Wells Fargo who tried to push class-action suits into arbitration, argued the rule posed “safety and soundness” concerns for banks and would raise the cost of credit. Then this week, the Treasury Department, relying heavily on a discredited claim that plaintiff attorneys routinely shake down corporations with meritless claims, published a 17-page report attacking the CFPB rule.

Yes, because clearly the big problem in American society is corporations being shaken down. Have you looked at corporate profit margins lately?

The attacks from Trump’s executive agencies on a fellow regulator gave Senators the cover they needed to side with Wells Fargo and Equifax over their customers. The Senate first tried to sneak in a vote on the resolution when the political world was distracted by the health care debate, but that didn’t work. It took shifting the framing of the rule from being about victims to  being about trial lawyers for Senate Republicans to succeed.

Supporters of the CFPB rule like Public Citizen’s Robert Weissman called the vote a choice “between corporate donors and constituents.” Amanda Werner, who gained notoriety for dressing as the Monopoly Man during Senate hearings on Wells Fargo and Equifax, notes that lawmakers opposing the arbitration rule received over $100 million in campaign contributions from the financial industry during their careers. “These contributions help explain why lawmakers are willing to aid and abet big banks in ripping off their own constituents despite overwhelming bipartisan support for the rule,” Werner said in a statement to The Intercept.

The Chamber of Commerce and other financial lobbyists had joined together to sue CFPB over the rule, but with the Senate’s successful vote, that will no longer be necessary. President Trump is expected to sign the resolution. Not only would that nullify the arbitration rule, but CFPB would be unable to work on any “substantially similar” regulation without express consent from Congress.

People say Congress does nothing. This is totally false.
When it comes to Wall Street interests, Congress always acts, and very quickly. 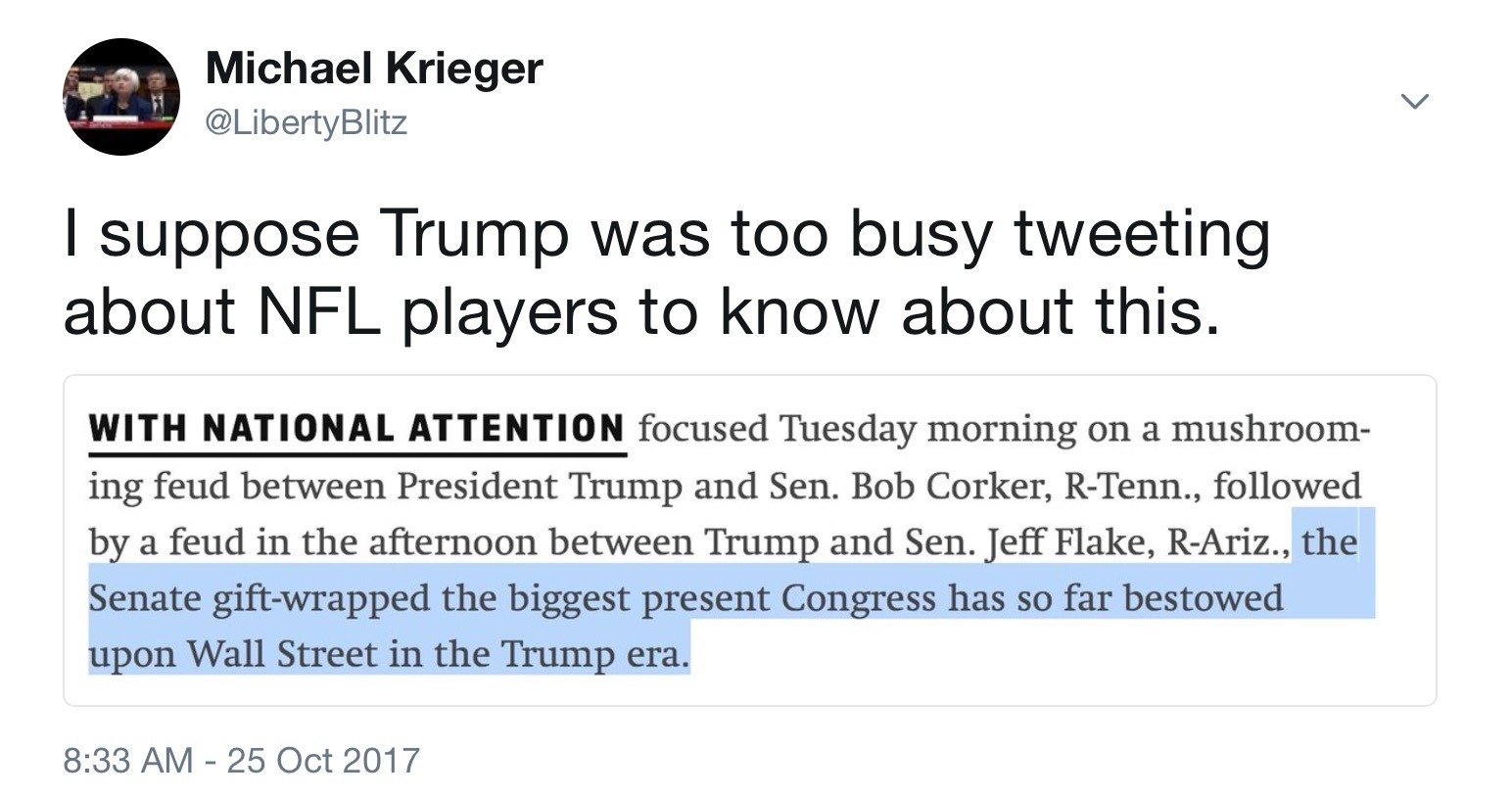 Trump cheerleaders are making the same excuses Obama cheerleaders did for him.
This is why we can't have nice things.

As usual, there’s more. For that, let’s turn to Wall Street on Parade’s article, Mike Pence Secures the No Law Zone Around Wall Street:

Wall Street is the only industry in America that contractually bans both its customers and its employees from accessing the nation’s courts as a condition of opening an account or getting a job there. (That’s likely because it’s also the only industry that has the brazenness to let the top lawyers of the largest Wall Street banks meet in secret each year to plan their strategies for keeping their no law zone in force.)

Instead of being able to go to court with a claim of fraud (if you’re a customer), or a claim for labor law violations, like failure to pay overtime or sexual harassment (if you’re an employee), Wall Street makes its customers and employees sign an agreement to take all such claims into an industry-run or privately-run arbitration system.

These private justice systems are not cheaper and fairer as Wall Street’s shills (like the U.S. Chamber of Commerce) insist. Fees can run into tens of thousands of dollars as opposed to a few hundred dollars to file in court; and study after study has found that arbitrators most often rule in favor of the corporate interest over the consumer.

What Wall Street and its army of lawyers like most about these private justice systems is that they are dark. Unlike a public courtroom, the press and the public are not allowed to attend the hearings. There are no publicly available transcripts of the hearings as there would be in court. Arbitrators are instructed that they do not have to follow legal precedent or case law but can rule from their gut; they are not required to write reasoned and detailed decisions so that an appeal of their findings can be made. In fact, it is next to impossible to bring a court appeal of an arbitration ruling because Wall Street’s biggest law firms have spent decades convincing the courts that these decisions must be permanently binding.

Another fatal flaw in these private justice systems is that there is no jury selection from a large public pool of random citizens but rather a repeat-player pool of highly compensated arbitrators.

Wall Street’s own industry-run arbitration system also makes good use of the repeat player advantage. On July 20, 2000 the Public Investors Arbitration Bar Association (PIABA) issued a press release accusing the National Association of Securities Dealers (NASD) of rigging its computerized system of selecting arbitrators.  The statement read: “In direct and flagrant violation of federal law, the NASD systematically evaded the Securities and Exchange Commission approved ‘Neutral List Selection System’ arbitration rule requiring arbitrators to be selected on a rotating basis.  Instead, the NASD secretly programmed its computers to select some arbitrators on a seniority basis – just what the rule was designed to prevent.”

PIABA discovered the manipulation when a team of its attorneys demanded a test of the selection system at an NASD/PIABA meeting in Chicago on June 27, 2000.  PIABA predicted that “this rule violation tainted hundreds or even thousands of compulsory securities arbitrations  –  many still ongoing.  In every such instance, the substantive rights of public investors to a neutral panel have been cynically violated.  Many public investors were thus twice cheated: first, by an NASD member firm that fraudulently conned them out of their life’s savings, and second by the NASD Arbitration Department’s rigged panels.”

I may not know much, but I know this won’t make America great.