Contrary to ECB propaganda, Target2 imbalances are a direct result an unsustainable balance of payment system. The imbalances represent both capital flight and debts that can never be paid back. If you think Italy can pay German and other creditors a record €432.5 Billion, you are in Fantasyland.

The interesting aspect of Italy's new record Target2 Imbalance is that it comes just as Dwindling Trust in Italian Banks is on the rise.

Just 16 percent of Italians have confidence in the country’s lenders, down from an already meager 17 percent in June, according to a poll by the SWG research group of Trieste on Friday. Only 24 percent trust the Bank of Italy, plunging from 36 percent in June.

One likely reason: a tortuous bank crisis that caused losses for savers and led the government to rescue three lenders with taxpayers’ money this year. The vanishing confidence is likely to show in campaigns for national elections expected by next spring.

Supporters of the populist Five Star Movement and anti-migrant Northern League have the least confidence in lenders and the Bank of Italy among those with a definite opinion, according to the survey of 1,000 adults conducted Oct. 23-25. 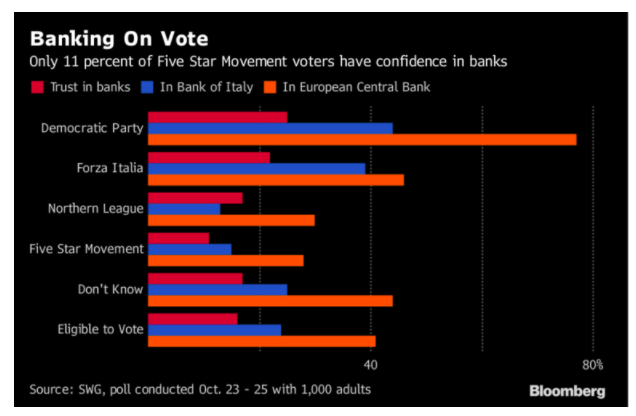 The eurosceptic Five Star Movement just happens to have the largest share of the vote in recent polls.

Target2 stands for Trans-European Automated Real-time Gross Settlement System. It is a reflection of capital flight from the “Club-Med” countries in Southern Europe (Greece, Spain, and Italy) to banks in Northern Europe.

Pater Tenebrarum at the Acting Man blog provides this easy to understand example: “Spain imports German goods, but no Spanish goods or capital have been acquired by any private party in Germany in return. The only thing that has been ‘acquired’ is an IOU issued by the Spanish commercial bank to the Bank of Spain in return for funding the payment.”

This is not the same as an auto loan from a dealer or a bank. In the case of Target2, central banks are guaranteeing the IOU.

Target2 also encompasses people yanking deposits from a bank in their country and parking them in a bank in another country. Greece is a nice example, and the result was capital controls.

If Italy or Greece (any country) were to leave the Eurozone and default on the target2 balance, the rest of the countries would have to make up the default according to their percentage weight in the Eurozone.

Another Look at Capital Flight

It is no coincidence that Target2 imbalances are on the rise as faith in banks collapses. Target2 is a measure of capital flight despite the ECB's assurances to the contrary.

For further discussion, please see Another Look at Capital Flight in Italy and Spain: ECB’s Target2 Explanation is False.