The black swan in plain sight does emit the Donald's orangish glow, but at the end of the day its true color is actually red.

That is, monumental towers of rapidly rising debt loom everywhere on the planet. For the moment, the artificial cash flow from this unsustainable borrowing spree is keeping a simulacrum of growth and prosperity alive. Yet this whole outbreak of debt madness----represented by $225 trillion outstanding on a global basis----is careening toward a financial and economic dead end that will soon crush today's fiscally profligate politicians and heedless financial punters, alike, in a devastating reset of bond yields.

For our first case in point, the always excellent Wolf Richter published a great chart over the weekend on the exploding US public debt. To say the least, it constitutes a clanging wake-up call amidst the absolute fantasy world that prevails on both ends of the Acela Corridor. That's because during the mere 8 weeks since the public debt ceiling was suspended by the Donald's end-run with Nancy and Chuckles in September, the national debt has spiked by $640 billion.

That's about $16 billion per Federal business day, and they are not done yet. The US Treasury will continue to borrow heavily until the current debt ceiling "suspension" expires on December 8----at which time it will repair to the old game of divesting trusting funds and employing other gimmicks which circumvent the ceiling, while waiting for Congress to blink and raise the ceiling or authorize a new "temporary" suspension.

As Wolf pointed out, this pattern played out during the debt showdowns of 2013 and 2015, as well, when the resulting "temporary" suspension resulted in borrowing spikes of $464 billion and $650 billion, respectively.

Accordingly, Washington has suspended it way into a $5.7 trillion increase in the public debt in just six years since October 2011. That is, during a period which supposedly constitutes the third longest business expansion in US history. 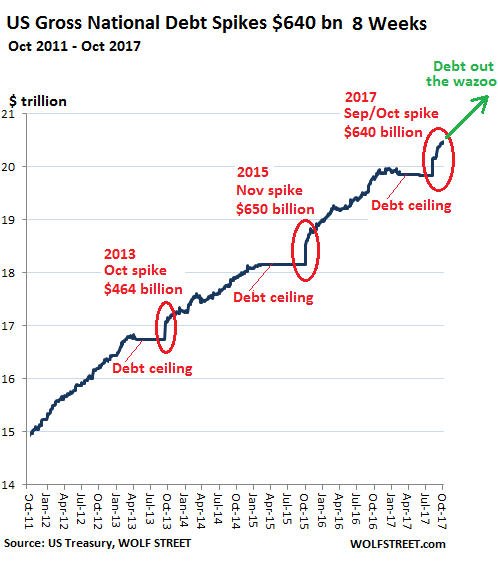 Indeed, when viewed in cyclical context the latest spike screams out a severe warning. To wit, in the 12 months since the election shock of November 8, 2016, the net public debt--- after giving effect to the fluctuations in the cash balance----has risen by $870 billion to the current total of nearly $20.28 trillion.

That's right. Way late in the business cycle-----between month #89 and month #101 of the expansion----the debt is increasing at a rate just under $1 trillion annually. Yet there is virtually no one in the Imperial City or in the Wall Street casino who has even noticed.

Nor have they noticed that revenue collections continue to weaken----even as a massive surge of spending for the four disasters since August---Texas, Florida, California (fires) and Puerto Rico----- crank up, along with the Donald's sharply increased temp0 of defense operations.

During the last four months (July through October), in fact, revenue collections came in at $918 billion. That represented just a 2.9% gain over the $892 billion collected in the same prior year period, and barely 1% in real terms after factoring in CPI inflation during the interim.

Needless to say, adding a $1.5 trillion deficit-financed tax cut on top of that over the next decade-----when a public debt of $31 trillion is already guaranteed by the cumulative baseline deficits through 2027--- would be the height of folly even under ordinary circumstances. But there are currently two aggravating circumstances that make it even more dubious.

First, as we demonstrated in our post on Friday, the Brady mark is neither a middle class tax cut nor a supply side growth and jobs stimulant; it's actually a giant windfall to the top 1% and 10%, who own most of the financial assets and especially equities.

That's because the bill cuts Federal income taxes for the very wealthy by $2.2 trillion over the next decade owing to repeal of the minimum tax, phase-out of the estate tax and the sharp reduction in tax rates on business profits to 20% and 25% for corporate and pass-thru entities, respectively.

Yet the net tax cut for the entire Brady bill over ten years---according to the Joint Committee on Taxation---is just $1.49 trillion. That means, obviously, everyone else is getting a $700 billion increase.

Needless to say, we don't see much incremental growth from the $2.2 trillion windfall to the top of the economic ladder. We are quite sure, for example, that the 5500 dead people who will benefit from the estate tax repeal each year will not work harder or invest more as a result.

Likewise, we don't see the 3.2 million minimum tax filers shortening their vacations or cutting back on luxury purchases in order to generate more output and investment from the repeal of that levy.

If anything, it will cause taxable incomes for lawyers, accounts and consultants to fall, thereby reducing Federal revenues. Indeed, like much else in the IRS code, the alternative minimum tax is not so much anti-work, as it is pro-complexity and waste.

Moreover, it is certain beyond much doubt that upwards of 90% of the increased after-tax cash flows from the business rate cuts will go to shareholders in the form of higher dividends and stock buybacks, not increased investments in productive assets or high payments for existing or added workers.

In fact, in a globally mobile and competitive labor market where the US is at the top of the cost curve, wage rates on the margin are set by the India Price for back office services and the China Price for goods. That's why IBM raised its job count in India from zero in 1993 to 130,000 at present, while cutting its domestic employment count from 150,000 to less than 90,000.

What this means is that the great off-shoring of the US economy has occurred owing to economic causes and the technological enablement of the global internet. These include dramatically lower labor rates abroad and proximity to materials, supply chains and end customer markets, not the statutory tax rate. IBM's effective tax rate, for example, is 11% and that's not atypical.

Indeed, a recent study of the largest US companies with positive net income over a six year period  showed that the average effective tax rate was only 14%. That is, the big cap internationals have already given themselves a big tax cut "selfie" by moving their tax books to the Caribbean, the Channel isles and other tax havens in addition to the impact of economically-driven off-shoring.

In this context, the smiling dufus the Trump White House named as CEA Chairman, Kevin Hassett, needs be thoroughly debunked. He now claims---contrary to all evidence and logic--- that the corporate income tax is shifted onto wages and that the 20% rate is therefore worth $4,000 per household in higher earnings!

That's complete malarkey, of course.Then again, contrary to all evidence and logic, Hassett also predicted the Dow would hit 36,000 in the year 2000.

In short, the Dems have never cared about the deficit and are now just harrumphing about it because the Brady bill does not benefit their constituencies and because it being pursued on a strictly partisan basis. And now that the Donald has left the Congressional GOP crazed and desperate for a "win," they, too, have thrown fiscal sanity to the winds and, instead, are signing up for a double catastrophe.

That is, they are embracing a giant, politically-stupid "trickle down" tax cut that will not make it to the legislative finish line, but will be a huge loser in the 2018 campaigns.

At the same time, they have punted completely on the spending side of the equation by using the FY 2018 budget resolution as a phony vehicle for parliamentary maneuver (i.e. 51-vote reconciliation in the Senate), thereby guaranteeing that the automatic spending machine for entitlements and debt service---70% of the total---will roll forward unmolested.

And that gets to the other aggravating factor. Namely, for the first time in 30 years, the Fed will be embarking upon a huge, unprecedented demonetization campaign that will dramatically expand the supply of existing treasury debt looking for a home among real money savers---even as the doomsday machines drives annual Federal borrowing above the $1 trillion per year mark.

And there is no respite in sight as far as the eye can see owing to the surging numbers of baby boomers retiring and their impact on social security payments and the medical entitlements.

Indeed, we estimate that in the next four years, the US alone will add $5 trillion to the Treasury float---even as the Fed disgorges upwards of $2 trillion of existing debt securities. At the same time, the other central banks---led by the ECB and the People's Bank of China---will be forced to exit the bond buying business as well or experience economically devastating declines in their exchange rate against the dollar.

That means, in turn, that the safety valve of the bond supply being sequestered in foreign central banks will also disappear from the global fixed income markets, thereby adding to the yield crunch coming down the pike.

Needless to say, the entire world economy will reel under the impact of rising yields because current asset valuations and the cash management practices of business and households alike are predicated upon ultra- low yields.

In this regard, the 100 months of so-called recovery have been wasted from a deleveraging point of view. In the case of the US household sector, for example, the 20-year surge in debt obligations prior to the 2008 crisis caused total liabilities outstanding to soar by 5.2X, and to rise from 57% of GDP when Greenspan launched the era of bubble finance in Q3 1987 to nearly 100% of GDP on the eve of the crisis.

Nevertheless, after a small net reduction in debt immediately after the crisis, total household liabilities have continued to rise, and now exceed $15.1 trillion. Accordingly, just 250 basis points of interest normalization will cause the carry cost of household debt to rise by upwards of $400 billion per year or nearly triple the amounts of the ballyhooed tax cut. Needless to say, US households will be far from alone---and also far from the most vulnerable balance sheets----in the coming global reset of debt costs. At present, the Red Ponzi is staggering under $40 trillion of state and private debt or more than 3.5X its nominal GDP----as vastly overstated and unsustainable as its official GDP figures actually are.

But during the weeks since the coronation of Mr. Xi occurred at China's 19th communist party Congress, its bond yields have been rising sharply to three year highs; and its yield curve has plunged into negative territory for the longest continuous period on record.

We can't even imagine the carnage that will occur among China's vastly inflated financial and real estate assets when global yields commence their inexorable rise. Nor is it easy to anticipate the crescendo of negative feedbacks that will incessantly pound its debt-driven hot-house economy.

But we are quite sure that Wall Street's current phony "synchronized global growth" meme will vanish almost instantly when the latest short-lived China credit impulse disappears from the world trading system.

The fundamentals currently don't matter, as is underscored in the chart below. That is, fundamentals don't matter until they do----and then the reset in the stock market will be devastating, as well.

As Lance Roberts succinctly explained in a post last weekend:

“The chart below expands that analysis to include four measures combined: Economic growth, Top-line Sales Growth, Reported Earnings, and Corporate Profits After Tax. While quarterly data is not yet available for the 3rd quarter, officially, what is shown is the market has grown substantially faster than all other measures. Since 2014, the economy has only grown by a little less than 9%, top-line revenues by just 3% along with corporate profits after tax, and reported earnings by just 2%. All of that while asset prices have grown by 29% through Q2.” At the end of the day, you can't borrow your way to prosperity. That's the oldest rule in the book of sound money and sustainable finance.

And it's about ready to be learned all over again.