This Cycle: It's Not The Economy, It's China, Stupid!

I know everything is fan-freaking-tastic - with the tax reform bill and global synchronized expansion and all. I figure the last thing you need is some nattering naysayer throwing cold water on this unbelievable party, so I won’t. At least not for the short run. 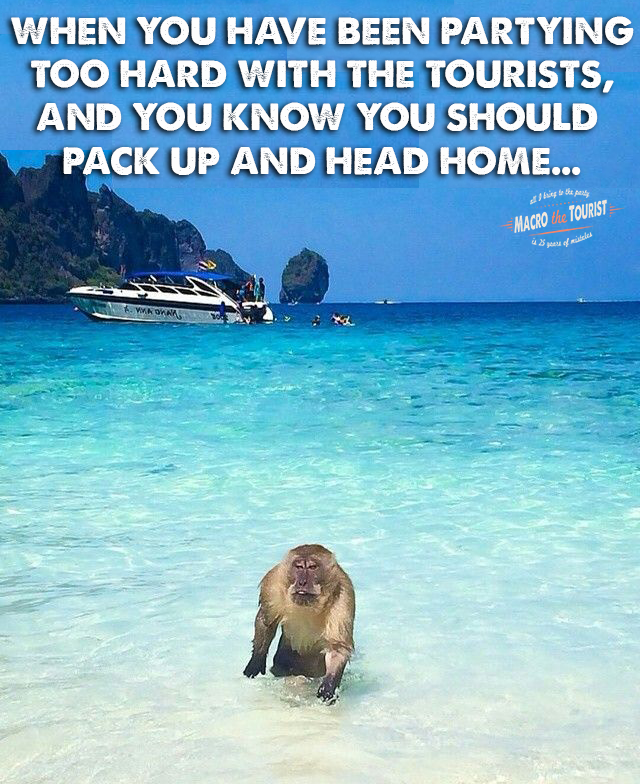 This rally will end when it ends. Maybe tomorrow, maybe next week, maybe next month, maybe next year. I don’t know and every time I try to guess, I just end up looking foolish.

But I recently listened to this terrific Bloomberg Masters in Business interview of the legendary hedge fund manager, Felix Zulauf, and he articulated such a compelling argument for the timing of the next slowdown, I felt like Felix was my Spirit Bear. 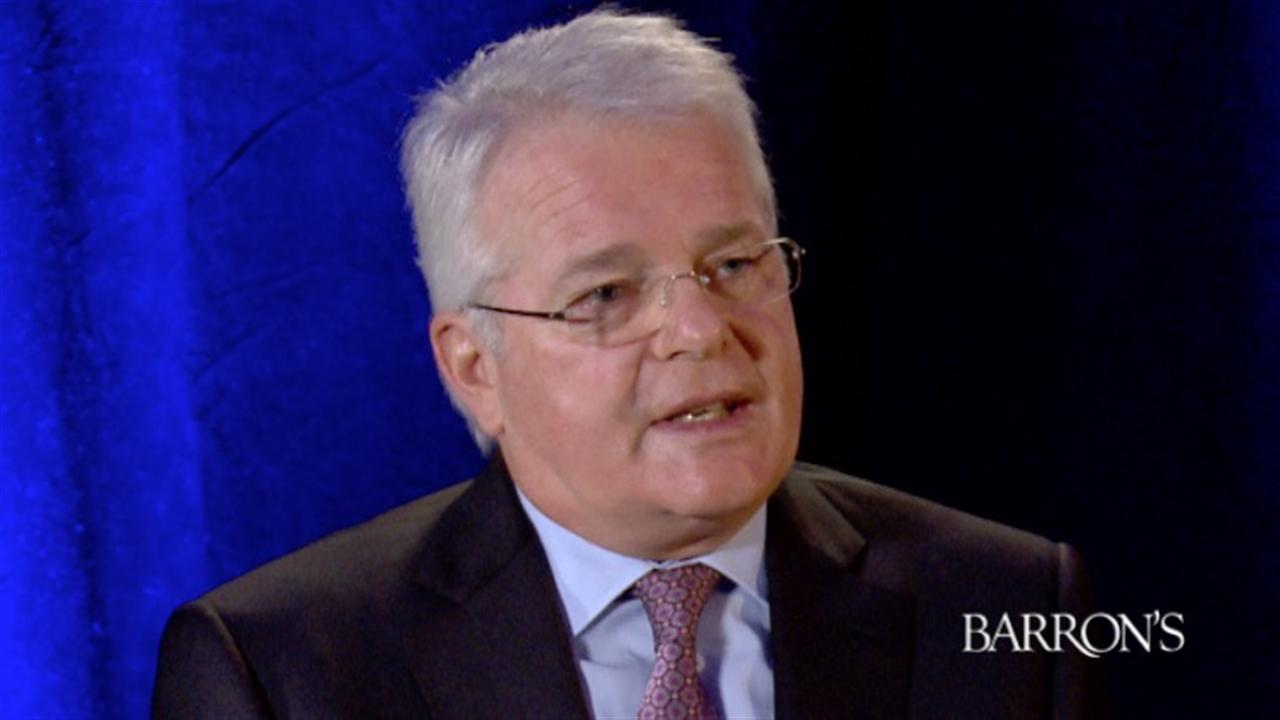 I have always enjoyed Felix’s viewpoint, but Barry Ritholtz did such a great job during this interview, that I have a new found appreciation for Felix’s career, and more importantly, his market calls. I had mistakenly assumed Felix was always bearish, but the truth of the matter is that he definitely switches from side to side, and is not the pro-typical Swiss hard money uber-bear. I didn’t agree with all of his economic philosophy by any means, but his market (and political) analysis was some of the most compelling dialog I have listened to in quite some time. If you haven’t heard it, then give it a listen.

If you don’t want to take the time, don’t fret - I have transcribed the most important part for you.

Felix: China I believe is in an interesting position right now. You heard President Xi’s speech last week, and in 2021 there is the 100th anniversary of the Chinese Communist party and it’s very clear that they want to have a strong economy at that time. If you want to have a strong economy in 2021, you stimulate in 2020. And they are central planners. So that’s means they have to take their foot off the pedal in 2018, 2019. I think in ‘18 and ‘19, they will address the imbalances in the financial sector and that will slow down the Chinese economy in ‘18 and ‘19, which will also slow down the rest of the world.

So we are entering a period where sometime in ‘18, I would say the peak of the market will be in the first half, the peak in the economy is probably from mid-2018 on, and then we slow down into 2020.

And 2022 is the next Chinese Congress, and President Xi is probably the first leader who tries to run for a third time. So he wants to have a very good economy in 2021 and 2022. That means he has to first slow things down, restructure some of the imbalances in the system because if he tries to carry through, it could backfire on him. It could be the worst of all worlds. Namely a completely overheated situation, with high inflation rates, etc…

That’s why I think the leader of this cycle, China, is going to slow down next year.

Barry: So the whole global economy is dependent on President Xi’s re-election desires in 2022?

Felix: As I said before, you always need to figure out what is the leading theme in the market cycle. In the last cycle, it was real estate, in this cycle it is China. And that’s why China is so important. China is the second largest economy, and in 10 or 15 years, it will be the largest economy of the world.

Longtime readers will instantly see why Felix’s theory appealed to me. I have long argued that China’s fiscal and monetary policy might be the most two important variables when it comes to forecasting the global economy. And here was Felix making the case that the entire global economic cycle is being driven by China. Felix - you had me at hello.

Now, make no mistake. This is a longer-term call. It’s not going to affect market prices next week, and probably not even next month. But in the coming quarters, it has the potential to be the most important determinant of financial asset performance.

I will take a little more nuanced approach to Felix’s theory, but in broad strokes, I completely agree with his analysis. The Chinese government will not allow their 100th anniversary be anything less than a rocking success. And President Xi is smart enough to know that he can’t just keep the pedal to the metal for the next four years and hope that the economic expansion lasts.

China’s performance over the past year

Remember all the dire warnings from your favourite star hedge fund managers about China’s coming collapse? Well, I don’t want to be prematurely counting any chickens, but it looks like Xi & Co. have managed to successfully navigate another year without the end of the world financial Armageddon scenario coming to fruition.

And it’s not like this has been achieved through growth-at-any-cost with super easy monetary policy. In fact, during the past year, both interest rates and the Chinese Yuan have risen. 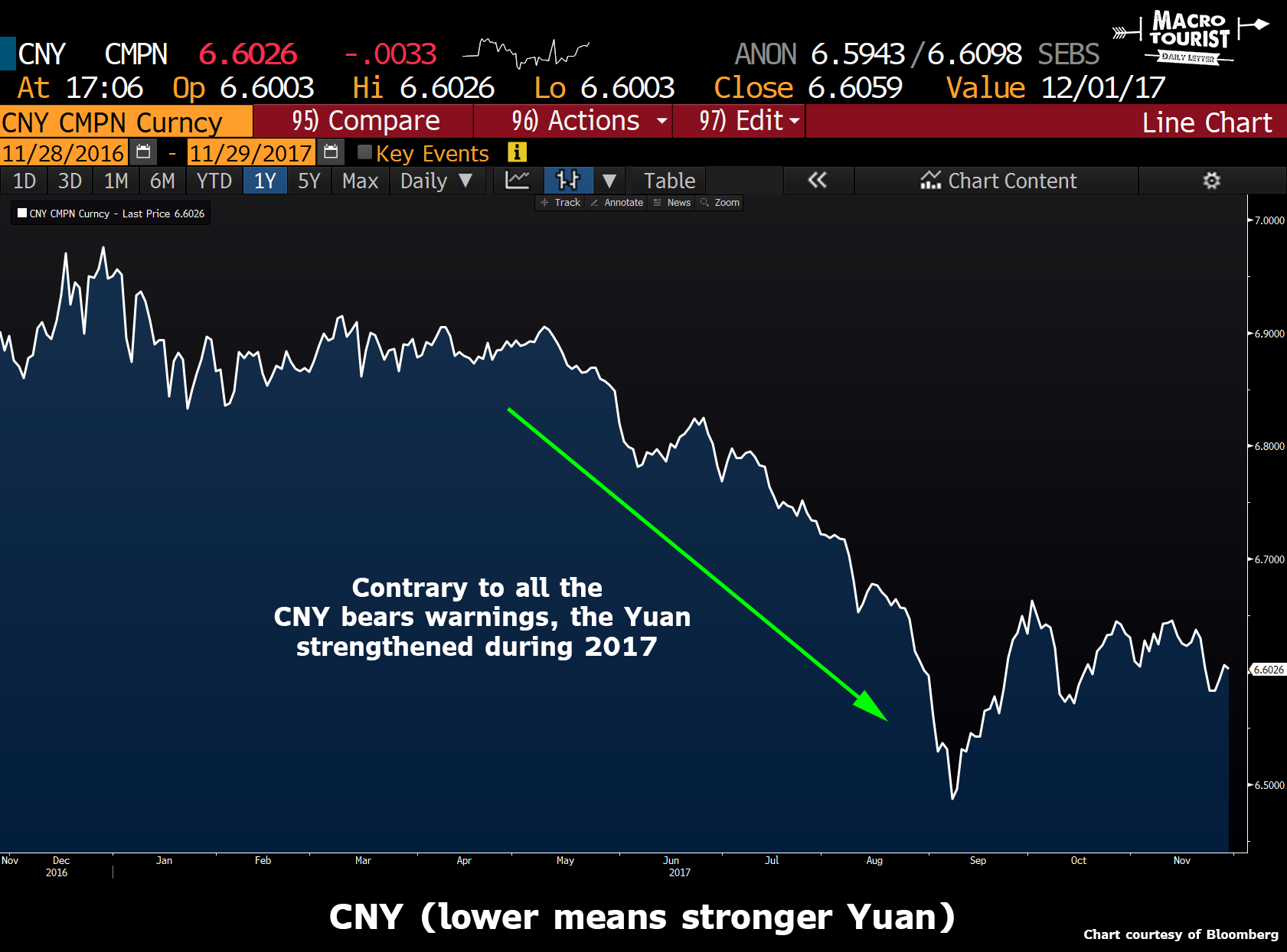 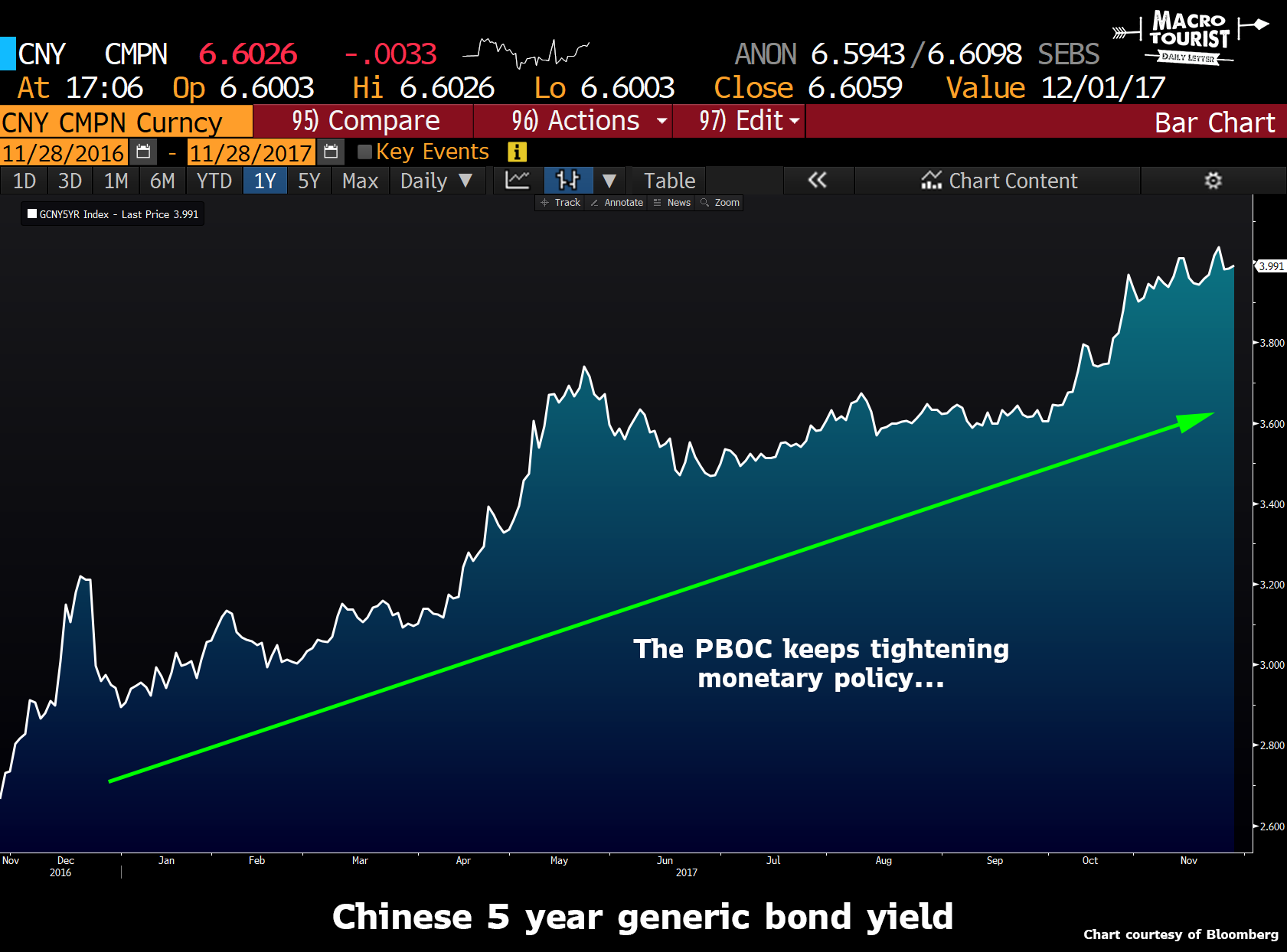 It appears as if, bit-by-bit, China has slowly tightened monetary policy. And I suspect that trend will not only continue, but even accelerate from now. President Xi will continue strangling the excesses out of the Chinese financial economy through tighter monetary policy. The PBOC won’t plunge China into a recession, but instead slowly choke off the speculative froth.

But there’s more to the story

Now here is where I will expand on Felix’s theory. China is in the midst of a massive infrastructure spending program with their One-Belt-One-Road initiative. The program is massive, and entails many complicated and extensive transportation system upgrades in all parts of their country. This sort of development is not something that you easily turn on and off. And nor should it be. This is true investment in the future of China. Much like Eisenhower’s interstate highway program that set up America to become an economic powerhouse for decades to come, China’s OBOR initiative is a crucial step for China’s development. Xi will not alter this plan. The course is set, and the money will be spent.

In fact, it’s already happening. And it’s causing China to run the greatest fiscal stimulus in history. Have a look at this chart from the world’s most charming and well-spoken China bear, Kyle Bass: 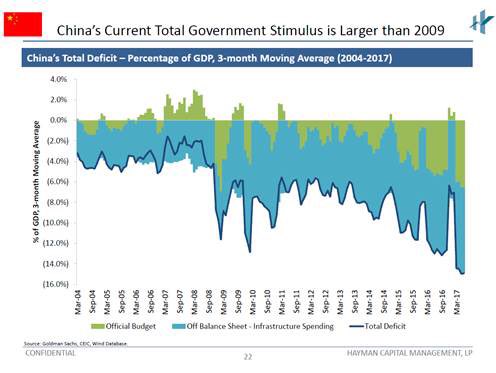 Yup, that’s crazy. China is running a fiscal deficit of 14% of GDP. Any wonder why the global economy is cruising along so nicely? It sure helps when you have this sort of fiscal stimulus wind in our sails.

Will Xi tap this back? Sure, he might try to trim around the edges, but the reality is that he will not make any meaningful cuts to the OBOR policy.

Therefore, China will be running a hot fiscal policy for years to come, and the only way to counteract its effect, will be by tightening on the monetary side. This will also have the added benefit of causing the financial economy to slow. In fact, we are already seeing this play out in the housing market. 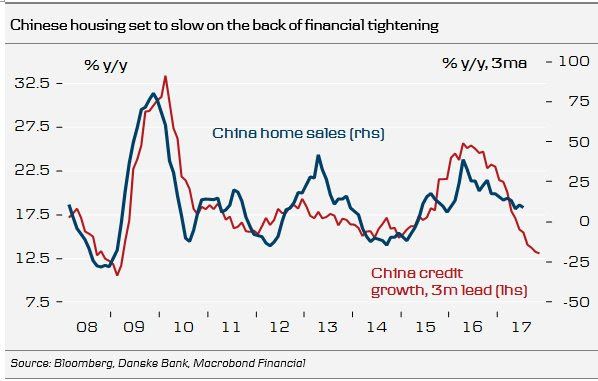 While I was thinking about this situation, I was reminded of a passage in the Market Wizards book where Stanley Druckenmiller spoke about his trade surrounding the unification of East and West Germany:

Everything started to come together at that time. Not only was I trading on my own without any interference, but that same eastern European situation led to my first truly major trade for Soros’s Quantum Fund. I never had more conviction about any trade than I did about the long side of the Deutsche mark when the Berlin wall came down. One of the reasons I was so bullish on the Deutsche mark was a radical currency theory proposed by George Soros in his book, The Alchemy of Finance. His theory was that if a huge deficit were accompanied by an expansionary fiscal policy and tight monetary policy, the country’s currency would actually rise. The dollar provided a perfect test case in the 1981-84 period. At the time, the general consensus was that the dollar would decline because of the huge budget deficit. However, because money was attracted into the country by a tight monetary policy, the dollar actually went sharply higher.

When the Berlin wall came down, it was one of those situations that I could see as clear as day. West Germany was about to run up a huge budget deficit to finance the rebuilding of East Germany. At the same time, the Bundesbank was not going to tolerate any inflation. I went headlong into the Deutsche mark. It turned out to be a terrific trade.

Now I know this isn’t the perfect analogy, but I can’t help but wonder if it will be more correct than all the Yuan bears who are predicting a China collapse.

Putting it all together

We have a Chinese President who wants to be re-elected shortly after his party’s 100th anniversary celebration in 2021. Therefore, it will be important that the Chinese economy is humming along at full speed at that time. To do that, he needs to stimulate in 2020, but the problem is, if he doesn’t tap the brakes now, he might risk overheating before then. President Xi will therefore take the hit, and get the pain over with in 2018 and 2019. Yet the story is further complicated by the fact that China’s long run infrastructure program is causing a hot fiscal policy. All of these factors add up to a much tighter PBOC for the next couple of years.

Call me an idiot, but I am tempted to take the long Yuan trade. I know that seems insane - all those really smart hedge fund managers are all forecasting a China collapse. But buying Yuan is probably better than betting on stocks going down because of the tight Chinese monetary policy. Not convinced it’s the best trade, and not even sure if I am going to do it in any real size, but I have often found the hardest trades, are often the best trades.

Either way, be aware of this multi-year seasonal Chinese economic timing dynamic. Maybe Felix just laid out a timetable for the market to finally roll over, albeit still many months away. That’s probably good because it certainly feels like it will be that long before we get any meaningful correction…