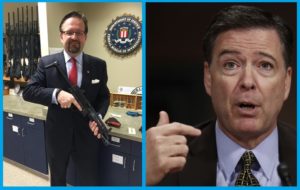 James Comey has been quite the chatterbox on Twitter since revealing his new handle in early November (@Comey) – firing off tweets about nature scenes, bible quotes, social gatherings, and most recently quoting himself – proclaiming how ‘honest’ and ‘strong’ the FBI is amid revelations that he put an anti-Trump / pro-Hillary agent in charge of both the Clinton email investigation and the early Trump-Russia probe – for which the FBI is now facing a contempt action over their anti-Trump bias during the election.

“I want the American people to know this truth: The FBI is honest. The FBI is strong. And the FBI is, and always will be, independent.” -Me (June 8, 2017)

“I want the American people to know this truth: The FBI is honest. The FBI is strong. And the FBI is, and always will be, independent.”
Me (June 8, 2017) pic.twitter.com/OZ1ZiBrMNL

Comey is quite the deep thinker. To be honest, you have to have a pretty high IQ to understand:

Goodbye Iowa. On the road home. Gotta get back to writing. Will try to tweet in useful ways. pic.twitter.com/DCbu3Yvqt3

Happy Birthday to the love of my life. Nothing goes together like onion rings and a cosmo (it IS her day, after all). pic.twitter.com/538fGuotNN

Then Gorka shows up…

Comey’s PR campaign then attempted to appeal to the religious demographic, quoting a bible verse (after quoting Churchill but before his Messiah complex kicked in and he quoted himself):

Oh man, throwing Amos 5:24 around like he owns the joint… until former Trump advisor, new Fox commentator, and all around badass Dr. Sebastian Gorka shows up to call James out over exonerating Hillary Clinton in the email investigation before the anti-Trump / pro-Clinton agent in charge, Peter Strzok, was finished looking at the evidence.

What's the right Bible verse for u precooking an innocent verdict for Hillary's #ServerGate before investigation was over? https://t.co/KeMx9Yzxej

I'd offer Psalm 82:2 as a response to @Comey: "How long will you judge unjustly, And show partiality to the wicked?" https://t.co/r4vkc10AYt

What's the right Bible verse for you burying investigation into Podesta influence-peddling for Uranium 1 with Hillary? https://t.co/KeMx9Yzxej

Tony Podesta is of course the disgraced co-founder of the Podesta group, who left his firm in late October when he reportedly became a central focus in Robert Mueller’s FBI Special Counsel investigation into Russian involvement in the 2016 election.

The former exec also said that in 2013, John Podesta recommended that Tony hire David Adams, Hillary Clinton’s chief adviser at the State Department, giving them a “direct liaison” between the group’s Russian clients and Hillary Clinton’s State Department, and that Tony Podesta regularly met with the Clinton Foundation while lobbying for Uranium One – the Canadian mining company bought by the Russia’s state-owned Rosatom after obtaining approval from the Obama administration.

And on Friday, Gorka posed the question as to how Comey got to head the FBI after only 12 years in the field:

How did Comey get to head the @FBI, the most important & powerful law enforcement agency, with just 12 years in the field?? https://t.co/OPOUKMmXJ6

Maybe it’s because Comey has had deep ties to Democrat / Clinton interests for years; earning $6 Million dollars in one year as Lockheed’s top lawyer – the same year the egregiously overbudget F-35 manufacturer made a huge donation to the Clinton Foundation. Comey was also a board member at HSBC shortly after NY AG at the time Loretta “tarmac” Lynch let the Clinton Foundation partner slide with a slap on the wrist for laundering drug money.

So as James “hand of the devil” Comey continues to tweet like everything’s normal – letting everyone know the FBI is “honest” and “strong,” while the noose is tightening, enjoy the white-hot phosphorous Dr. Gorka drops to illuminate the target.