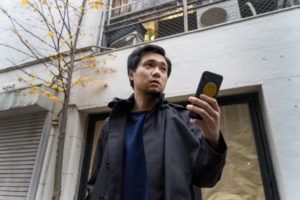 36 year old e-commerce entrepreneur Yusuke Mitsumoto had an idea: “what if I pay people instantly for their used goods and then trust them to give them to me?”

Mitsumoto launched an app in June to test the idea, quickly realizing that that people – surprise – went for the money, putting him on the hook for $3.2 million (360 million yen).

“after 16 hours, he was stunned to discover he was on the hook for 360 million yen ($3.2 million) and shut the service down. A day later, truckloads of clothes and electronics gadgets started to arrive, with his startup’s employees forming a bucket line to move packages into his company’s tiny office in Tokyo.” –Bloomberg

But then, to Mitsumoto's surprise – people took the money and then brought their stuff as promised! At the end of the day, only 1 out of 10 second-hand-sellers didn’t deliver.

In August, Mitsumoto relaunched the service called Cash, as a new way to gather inventory for an online flea market. Total daily purchases are capped at 10 million yen – and must be comprised of items on a list including; smartphones, luxury apparel, watches, clothing, and other specific items on a list of several thousand.

Customers can also snap pictures of their items and shoot over a non-negotiable offer.

“It was a social experiment,” said Mitsumoto, who started selling goods on the web in 1996. He later launched Stores.jp, Japan’s version of Shopify, which he sold and then bought back. “Of course, I believed that good people would outnumber the bad, but the question was by how much. That’s not something you can find out without trying.”

The market for second-hand goods is strong in Japan, valued at over 1.6 trillion yen ($14 billion USD). Yahoo Japan Corp. operates the country’s largest online auction site, Mercari, which became the first Japanese startup to be valued over $1 billion.

So when Keishi Kameyama – one of Japan’s richest entrepreneurs and founder of DMM.com came along, Mitsumoto agreed to sell Cash to DMM for 7 billion yen ($62 million USD) and continue running the business.

“For people doing internet businesses in Japan, DMM is a scary presence,” Mitsumoto said. “You never know when they may launch their own business and become a tough rival. I figured it’s best to at least meet.”

Indeed, a week after the deal was announced, Mercari launched an identical offering. The move by Cash proved that there was a need for such a service, said Takeo Iyo, the vice president in charge of Mercari Now. –Bloomberg

So – what do you think, would a thrift shop app work outside of an honor-based society like Japan?