The world’s third largest economy has an aging and shrinking population and will simply disappear. The low fertility is not unique to Japan. The same problem besets Taiwan, China and Korea as well as the United States and Europe. In the West the establishment has opted for population replacement.

Countries like the UK, France and Sweden see a population growth only thanks to mass migration from Africa and Central Asia. The US replenished its dwindling population stock with migrants from Mexico to such an extent that in some counties Spanish is now the language of the majority.

After the Second World War Japan experienced the post-war baby boom. In 1948 a law was passed, most probably serving American interests, enabling easy access to abortion. At that time the fertility rate (average number of children born to a woman over her lifetime) was more or less stable – about 2.1 – which is the level needed to maintain population. However, in 1973 it started to decline rapidly and in 2005 it reached the lowest value of 1.26; in the same year the number of deaths has been higher than the number of births. Nowadays it stands at about 1.46.

The statistics are devastating: every hour Japan’s population is dropping by about 51 people.

No other nation is ageing so fast and nowhere do we have as many centenarians (1/5 of their world’s population). 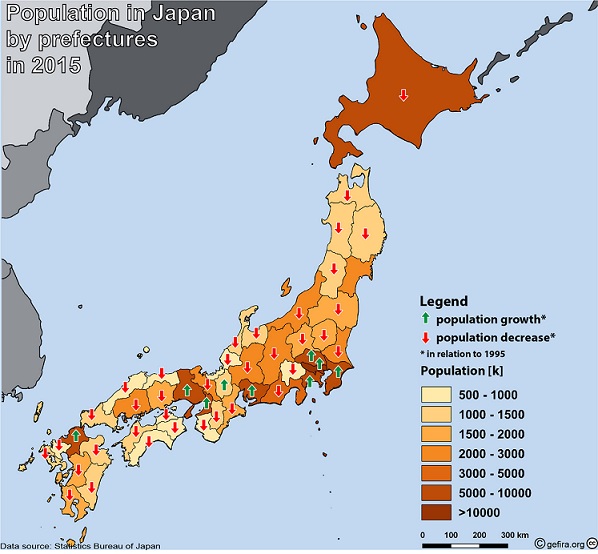 Twenty years ago the 40-50 and 20-30 age-groups were the largest, now about one-third of the Japanese are above 65 years old and the number of people aged 60+ continues to increase. 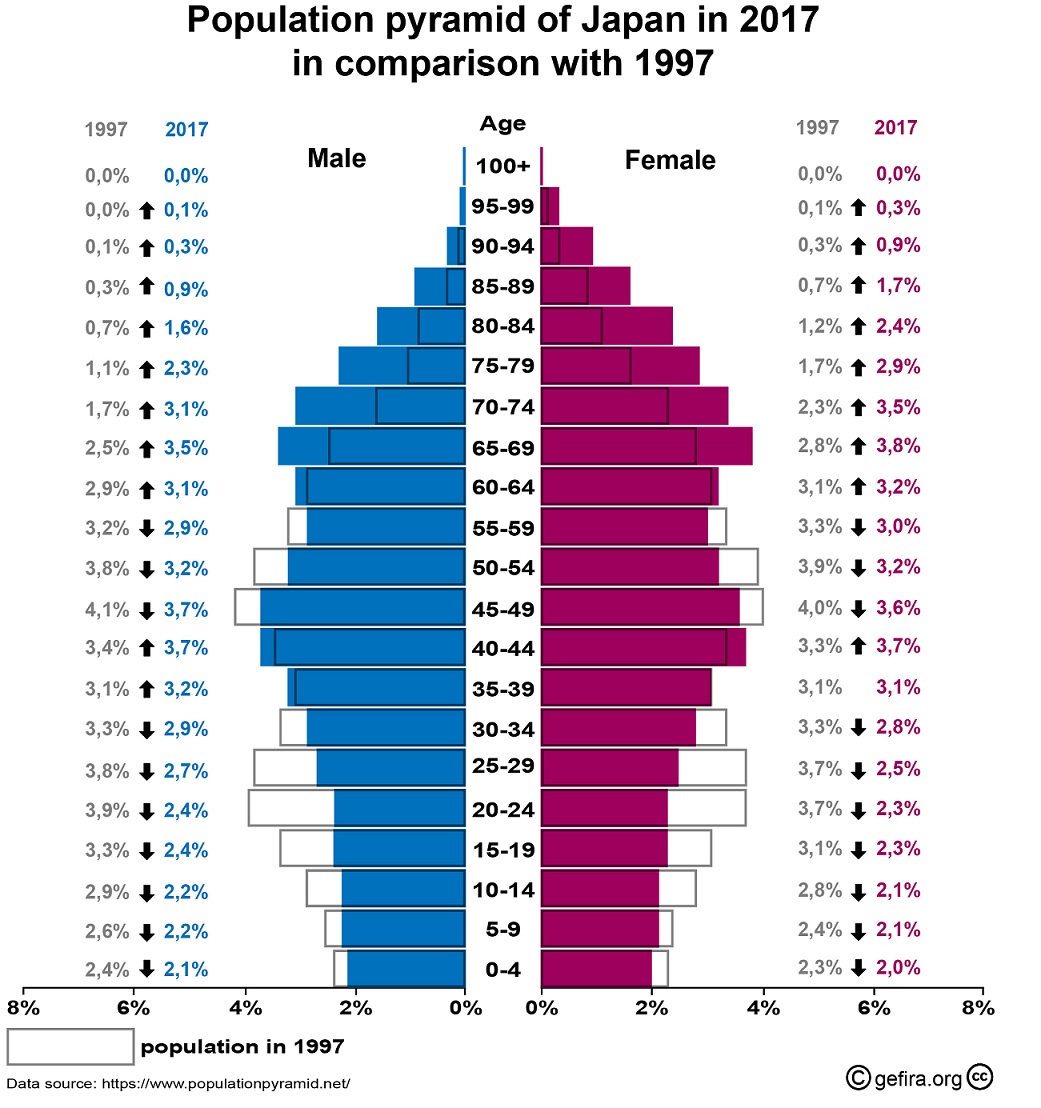 What is the reason for this phenomenon? The answer is simple: lack of children. The Japanese society focused on production of goods rather than the production of offspring.

The Japanese are accustomed to living a comfortable life and all too often they choose a career over a family. Marriages are concluded later and fewer. 1 in 4 men and 1 in 7 women remain unmarried at age 50 (not including divorcees and widows or widowers).There is no equilibrium between public and private life. Japanese work overtime and do night shifts, socialize with professional colleagues and go on business trips. Many young people have temporary and part-time jobs without social benefits and with a low salary, so they say they cannot afford children. The employers do not support mothers. Employment with mothers and pregnant women is often discontinued. Because of insufficient daycare for children and lack of kindergartens 70% of women who have their first child stop working for at least 10 years. Costs of child raising are high. Even older people (and they are the big part of the Japanese society) are not well-disposed to children who disturb them with their noisy behaviour. There are cases where the playgrounds, playing fields or other facilities for children have been removed for this reason. The problems in western societies are similar. Women are encouraged to have a professional carrier, which enlarges workforce and productivity. On the other hand the declining and aging population translates into a drop in workforce and less consumption and the resultant slowdown of economic growth and a smaller GDP. If the nation’s total tax revenues decrease, there is little money to pay for the maintenance of the infrastructure. The demand for health care will be bigger and it will lead to its increasing costs. The real-estate market, the traditional driver of credit creation, will collapse. There will be more and more abandoned buildings and empty places. The number of unoccupied dwellings has increased from 0.43 % in 1948 to almost 15% in 2017. Rural areas are the first to become empty. In 20 years the area of abandoned land is likely to reach the size of Austria. 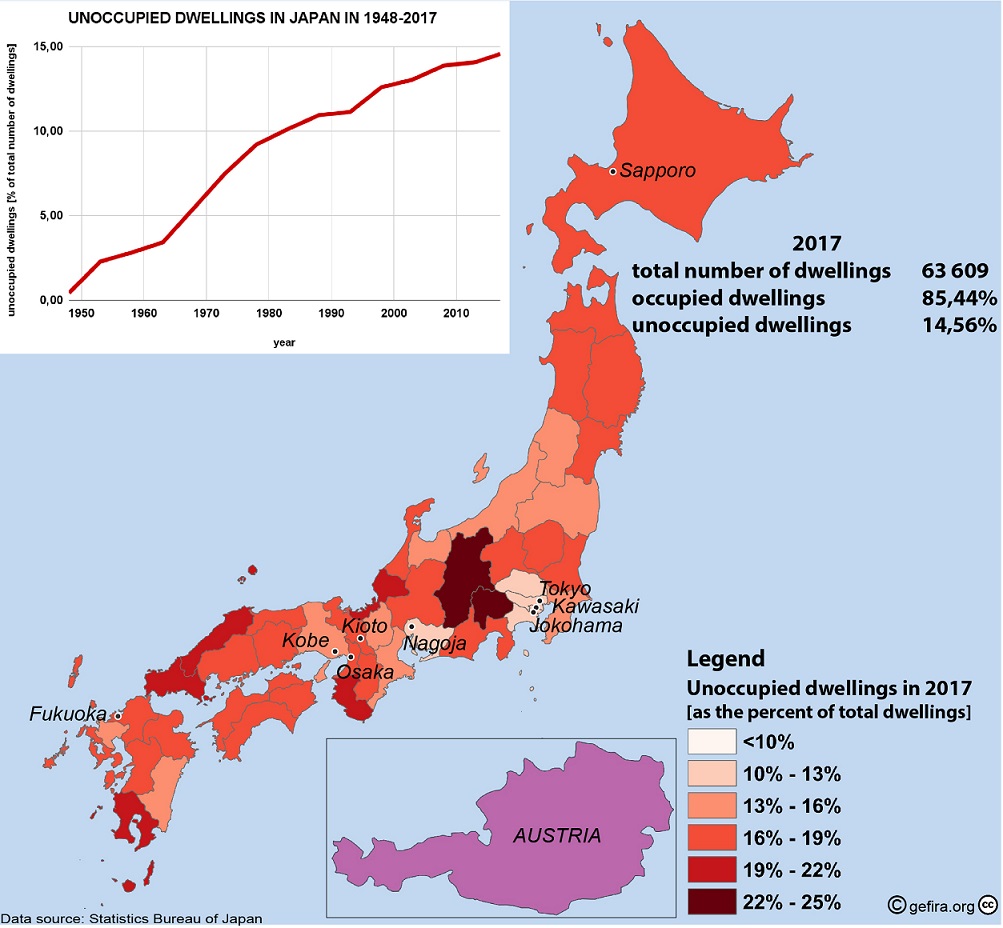 Japan’s depopulation will affect many states – the US, China, South-East Asia, Saudi Arabia, Australia and Europe – because the country is the world’s 4th largest exporter and 5th largest importer. The US will lose its 4th largest business partner. These countries may experience problems with the import of machines like computers, broadcasting equipment and automobiles. Most economists failed to understand the devastating effects of the drastic and unprecedented change in the population.

Japan’s shrinking population is a result of many factors from the recent past. Surely, the publication of a “women’s handbook”educating them about fertility and used as the promotion tool is not enough to encourage them to have children. It is hard to reverse the declining trend. What can be done? Japan, like the white man’s world, could be more open to immigrants. If Japan succeeded in having immigrants settle down in their country, then the Japanese race, culture, traditions would vanish and the nation wouldn’t survive in anything but the name. The Japanese government will not opt for such a solution.

Japan’s population is likely to become ever smaller. In the beginning, the living standards would rise because of the smaller density and smaller consumption of natural resources. Even so, the country would drop from the list of the biggest economies. Eventually, the number of people could only level out if the fertility increased to 2.1. This can only be done by changing the mindset of the average citizen. If the government fails to change the people’s attitude to having children, then before 300 years elapse, the Japanese population will have shrunk to 300.

Japan’s plight is shared by all developed countries in Asia and Europe. The world likes to portrait Japan as a case on its own, and economists and politicians prefer to ignore demographic reality. Europe is trying to solve the problem by importing Third World people. It is a weird reversed colonization experiment. What an irony! The French elites were not able to rule over the Algerians in Algiers, now they are trying to manage the Algerian population in Paris. There is no reason to believe the outcome will be much different. China will join the club of shrinking population countries between 2025 and 2030.

The developed countries have to be prepared for a Japanese scenario on a global scale. And one should be warned, the Keynesian theory, the Modern Money Theory or the Austrian school of economic thought will not have a solution for the current economic state of affairs.