So much for that call. I thought there was no way Yellen would put her fingers in her ears, close her eyes, and shout “nah nah nah - I can’t hear you” to the speculative fervour that has gripped markets. Well, there is no way to couch it. I was wrong. 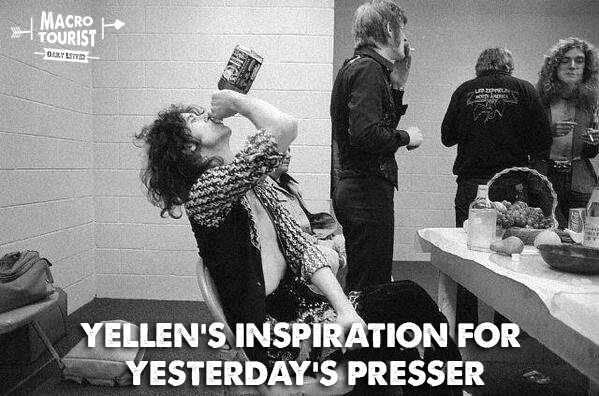 In her last press conference, Yellen focused on all the positives.

Stocks are elevated, but economists have no way of determining if they are too elevated.

Bitcoin is going nuts, but it’s not a problem because it plays a very small role in the payments system.

The yield curve is within its historic range and the recent flattening does not signal a policy error.

Trump’s tax package will help growth, but will not result in too much by any means.

Inflation is slightly below target, but there is little chance it will shoot up to become a problem in the coming years.

In short, everything is great, and there is no need to alter course with higher rates.

Her whole press conference can best be summed up with her observation, “there’s less to lose sleep about now than in a long time.” 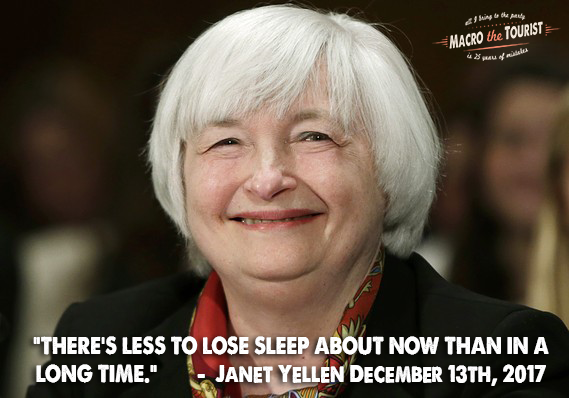 Timestamp a ticket. That quote might be one for the ages.

And the most confusing part of her position? It’s not intellectually consistent. The only reporter with the guts to confront Yellen during her last press conference was New York Times’ Binyamin Appelbaum.

“I’m struggling to reconcile the pieces of the economic outlook that you have just described today.

You have said that we are basically at full employment. You have said that you are expecting the tax package to deliver a significant stimulus, and it will be on the demand side. You expect growth to be faster. You expect unemployment to be lower. And yet somehow inflation is going to remain at 2% for the foreseeable future. Could you describe what has changed about your economic assessment in that everything has changed except inflation?

Yeah, Binyamin, I am struggling too. Good for you for holding Yellen’s feet to the fire.

Most of Yellen’s response to the NY Times reporter’s question consisted of doublespeak gobbledygook, arguing that market participants should be careful reading too much from the slight change in economic variables communicated in the Fed’s Dot Plot, but Yellen did let a little too much truth slip out in the final part of her answer:

“Inflation has been running low on a persistent basis and the committee does have a concern about inflation and wants to see it moving up. It could take a longer period of a very strong labour market to achieve the inflation objective.”

Well, I’ll be a monkey’s uncle! During her last meeting, Yellen chose to finally embrace the lower for longer mantra.

After years of arguing markets were wrong forecasting benign inflation, Yellen has now come to the conclusion that inflation is not the problem the Federal Reserve previously believed. Instead of taking her last meeting to warn about the dangers of over-exuberant risk markets, Yellen chose to throw in the white towel regarding the Fed’s long awaited inflationary awakening.

I can almost hear what’s going on through Yellen’s mind:

“You know all those times I sat up here and mouthed words about how we would be vigilant about inflation? Well, that was just a bunch of shit to keep the hawks happy. Rates are never going up in any meaningful way because we don’t have a clue as to what really drives inflation. Actually, we know that we can’t control traditional inflation, and that our stimulus only creates asset inflation. We would love to be able to turn that asset inflation into other kinds of inflation, but we don’t have the foggiest idea how to accomplish that. In the mean time, we just keep rates low and hope the risk asset bubbles don’t blow too out of control. And Applebaum - screw you for saying it out loud. I am going to tell Powell not to invite you to anymore of these things.”

Yellen drops mic and walks out.

I don’t have much to add to Yellen’s stunning refusal to acknowledge what everyone plainly sees in front of them - namely everything is going up except inflation.

Don’t mistake me as some sort of David-Stockman-disciple-raving-bear who thinks Yellen’s admission means we are going to burn in some fiery crash. I just strongly believes the Federal Reserve’s job is to lean against the wind, not into it. Given that Yellen is on her way out, I figured it made sense for her to reinforce that mandate.

But it appears the only thing that matters is the Fed’s 2% inflation target. Kind of shocking really. And it’s not just me who believes this obsession with the inflation target is causing problems. My all-time favourite trader, Stanley Druckenmiller, gave an interview a couple of days ago where he questioned Central Banks’ adherence to this mandate:

Bitcoin as well as art, wine, equities and credit are all “one way up.” There are huge distortions in markets, he said, “all in the name of this 2 percent inflation target.”

In some ways, we should be thanking Yellen for her candour. For all their talk about using judgment in determining the path of monetary policy, it is clear that the Fed has set a course to slowly raise rates, and this will only be altered by changes in either inflation or employment. There is no third mandate for financial stability. There is no sober second thought about policy setting. Risk markets going crazy will not change policy as long as inflation is ticking at 1%. The economic models are all that matter.

Well, the one thing I have learned over the years is that Central Bank officials will be more wrong than anyone. Yellen thinks there is nothing to lose sleep about. The simple fact that she believes this makes me lose sleep! Remember what that slightly-odd, old dude, that’s on TV every now and then, once said.

I am pretty confident Yellen will be spectacularly wrong. I am just not sure if it will be with the economy rolling over hard, or inflation taking off just when she finally has given up. What if it’s both? Nah… Can’t happen. That would be terrible and Yellen told us everything’s great!