While the U.S. Shale Energy Industry continues to borrow money to produce uneconomical oil and gas, there is another important phenomenon that is not understood by the analyst community.  The critical factor overlooked by the media is the fact that the U.S. shale industry is swindling and stealing energy from other areas to stay alive.  Let me explain.

First, let's take a look at some interesting graphs done by the Bloomberg Gadfly.  The first chart below shows how the U.S. shale industry continues to burn through investor cash regardless of $100 or $50 oil prices: 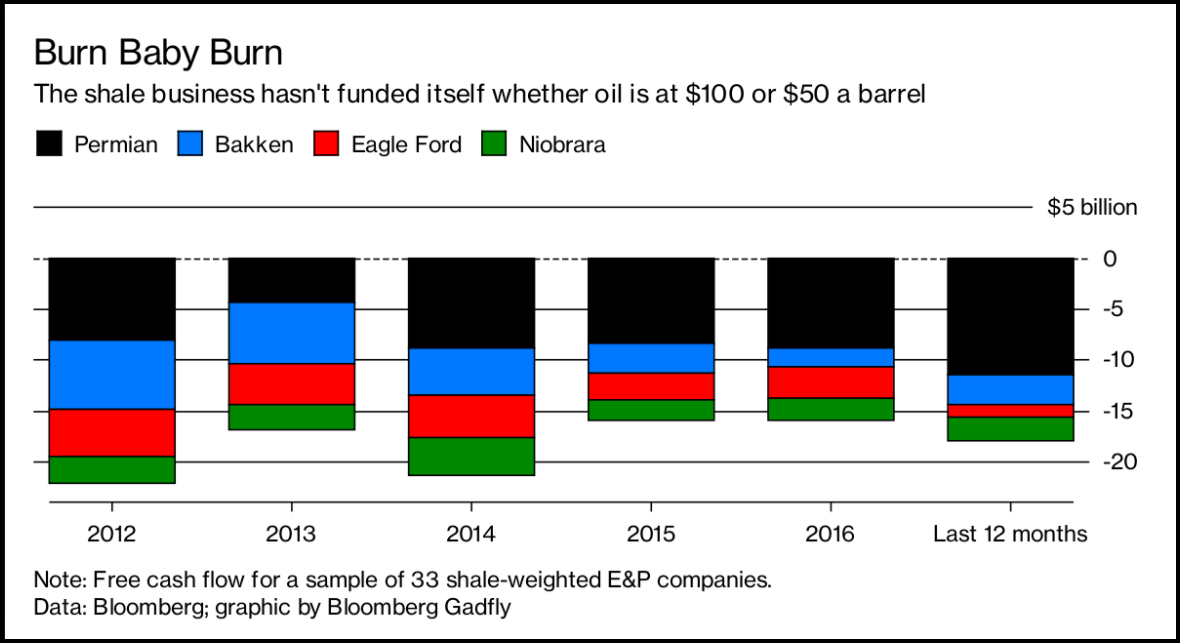 The chart above shows the negative free cash flow for 33 shale-weighted E&P companies.  Even at $100 oil prices in 2012 and 2013, these companies spent more money producing shale energy in the top four U.S. shale fields than they made from operations.  While costs to produce shale oil and gas came down in 2015 and 2016 (due to lower energy input prices), these companies still spent more money than they made.  As we can see, the Permian basin (in black) gets the first place award for losing the most money in the group.

Now, burning through investor money to produce low-quality, subpar oil is only part of the story.  The shale energy companies utilized another tactic to bring in additional funds from the POOR SLOBS in the retail investment community... it's called equity issuance.  This next chart reveals the annual equity issuance by the U.S. E&P companies: 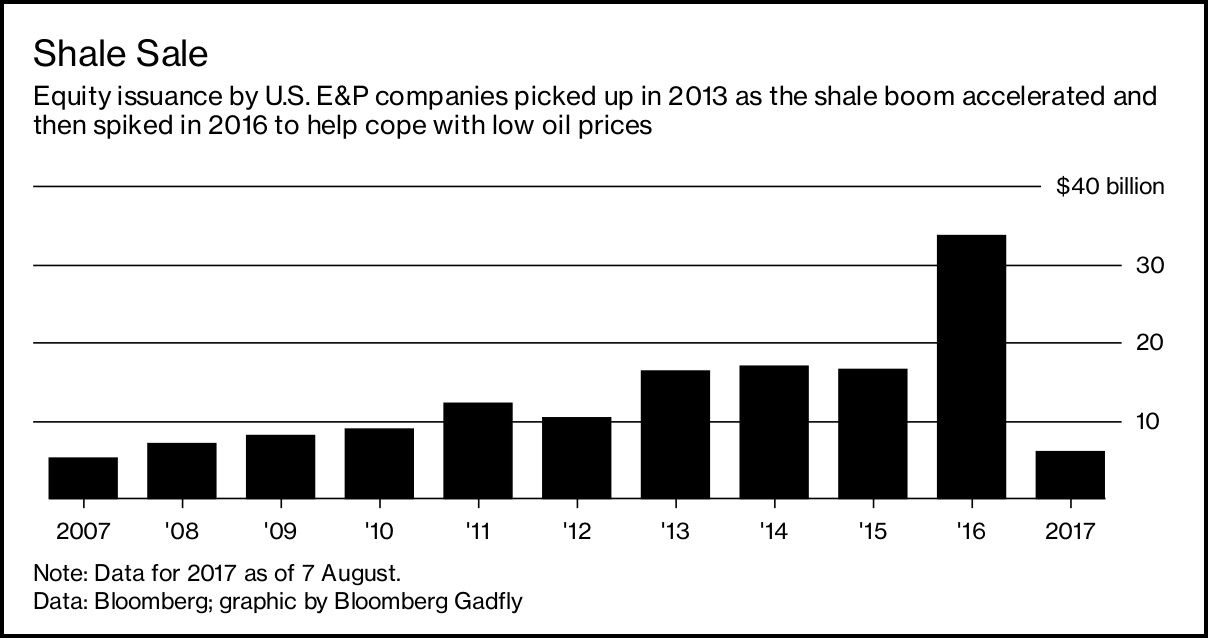 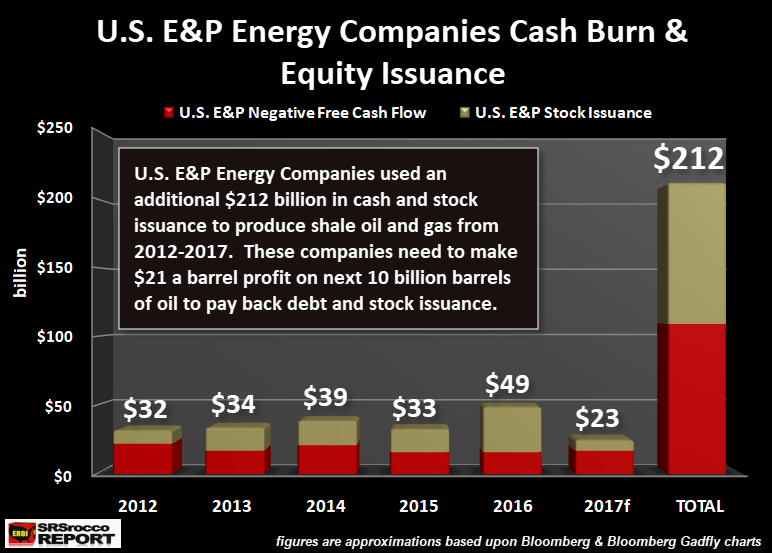 Thus, the U.S. E&P companies tapped into an additional $212 billion worth of funding over the last six years to produce uneconomical shale oil and gas.  Now, this chart is an approximation based on the negative free cash flow (RED color) from the four top U.S. shale fields and the shale equity issuance (OLIVE color).  So, how much money would these U.S. E&P companies need to make to pay back these funds?

Good question.  If we assume that the U.S. shale oil companies will be able to produce another 10 billion barrels of oil, they would need to make $21 a barrel profit to pay back that $212 billion.  However, they haven't made any profits in at least the past six years, so why would they make any profits in the next six years?

Okay, now that we understand that the U.S. shale industry has been burning through cash and issuing stock to continue an unprofitable business model, let's take it a step further.  If we understand that the U.S. shale energy industry is not making enough money from producing the oil and gas, then it also means that it takes more energy to produce it then we are getting from it.  Sounds strange... but true.

We must remember, investors, furnishing U.S. shale energy companies with funds are another way of providing ENERGY.  These U.S. shale energy companies are taking that extra $212 billion (2012-2017) and burning the energy equivalent to produce their oil and gas.  For example, it takes a lot more water to frack oil and gas wells.  To transport the water, we either do it by truck or by pipeline.  While this extra water usage is a Dollar Cost to the shale energy industry, it is really an ENERGY COST.  Think about all the energy it took to either transport the water by truck, or the energy it took to make the pipelines, install them and the energy to pump the water. 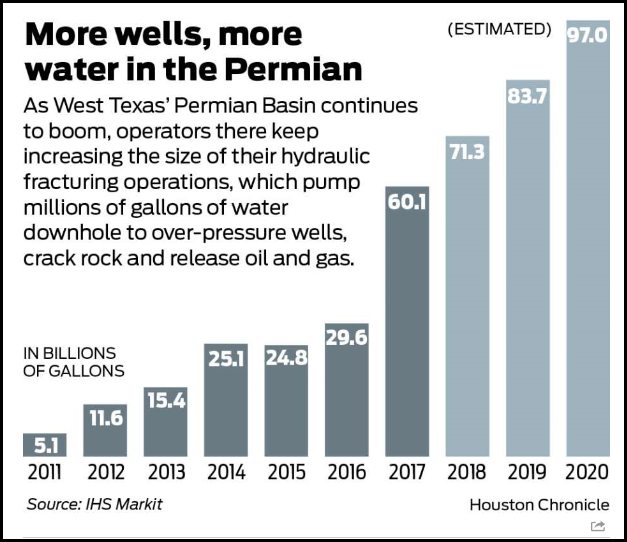 Unfortunately, investors don't see it this way because they do not realize they will never receive their investment back.  It was spent and burned years ago to continue the Great U.S. Shale Energy Ponzi Scheme.

Let me put it in another way.  The U.S. and world economies are based on burning energy.  When we burn energy, we create economic activity and hopefully growth.  If the U.S. shale energy industry needed $212 billion more to produce the oil than they made from operations, then it means it burned more energy than it sent to the market.  Do you see that now??

So, the U.S. shale energy industry is STEALING & SWINDLING energy wherever it can to stay alive.  This is the perfect example of the Falling EROI (Energy Returned On Investment) forcing an industry to CANNABLIZE itself (and the public) to keep from going bankrupt.