From kindergartens to high schools, from prisons to anyone who's simply lost their ID, China is conducting the world's most aggressive campaign to collect DNA from its population - with or without permission, in what it is calling a "high-tech security blanket" used to better monitor its 1.4 billion citizens, the WSJ reports

Schoolchildren in a bucolic region in western China famed for steam trains and jasmine flowers thought little of it when police interrupted classes and asked all the boys to spit into small plastic boxes.

Chinese authorities are already pointing to the collection techniques as a success - highlighting a case in Qianwei County, in which the murder of two shopkeepers from nearly a decade ago was solved using genetic samples collected from the murderer. 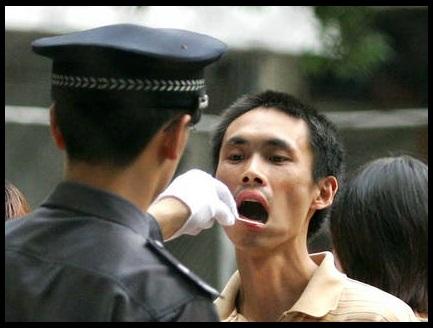 The goal, according to a WSJ's examination of police documents from across China, is to double China's current DNA repository to 100 million records by 2020 - which will require that they step up their efforts and collect nearly as many records each year as the United States has in its entire national database built over two years. 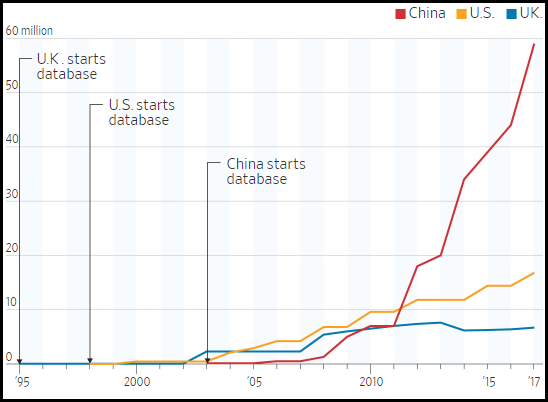 The data collection has been aggressive according to the WSJ, as many of the methods used by Chinese police would be illegal in the U.S. - such as taking saliva swabs or blood samples from people detained for violations such as forgetting to carry their ID, or writing blogs critical of the state.

In the United States, regulations limit the collection of DNA samples to those who are arrested - or in some states convicted, of a serious crime - unless a warrant or the person's consent is obtained, or police take samples from discarded items such as chewing gum or other circumstances in which DNA-containing bodily fluids might be lying about.

In China, on the other hand, "certain groups considered a higher risk to social stability," is all that's required to capture genetic information - including migrant workers, coal miners and people who rent homes instead of own, according to documents.

Not only that, Chinese authorities are outright lying to people about taking samples:

In Baishan, a city bordering North Korea, residents of a home for the elderly were told they were getting free health checks, the police documents show. In mountainous Ningxia, in the northwest, residents were told a census was being conducted. In the southern manufacturing city of Shenzhen, an itinerant worker told the Journal he had his blood taken after he was unable to show a local residency card.

In Qianwei County, police decided that they couldn't reasonably test all 130,000 residents in one town to solve the double murder of the shopkeepers - fearing public outrage and high costs, so they lied - telling residents that they had to test schoolchildren from each clan in the region as part of an anti-child-trafficking campaign to trace lost children, as DNA is hereditary and would allow investigators to narrow down their investigation.

A teenage boy studying in one of the county’s high schools recalled that a policeman came into his class after lunch one day this spring and passed out the collection boxes. Male students were told to clean their mouths, spit into the boxes and place them into envelopes on which they had written their names.

“Of course we were curious what this was for,” the teenager said. "No one told us the reason, neither the teachers nor the police officers.”

The boy said he joked with his classmates that the unusual request was in case they committed a crime some day. -WSJ

Chinese authorities continue to point to a handful of success stories while defending their collection techniques. In 2016, detectives in northern China caught a serial killer dubbed "Jack the Ripper," who had raped and mutilated 11 women and girls over 14 years. The culprit was arrested after a DNA sample taken from his uncle - who had been arrested for bribery, tied the murderer to his victims. The man confessed, and state media widely cited the case as justification for ongoing collection efforts.

In a police journal last year, China's chief forensic officer, Liu Shuo, wrote that the DNA database - which already has 54 million people cataloged had become "a precision-guided weapon for crime-solving."

In other parts of the country, DNA profiles have been paired with a subject's other biometric information, including fingerprints, portraits and voice samples, according to the heads of the DNA program. One provincial police department has even floated an idea to link the entirety of an individual's information to their shopping habits and entertainment records, according to a document presented at the national police DNA conference.

This is all leading up to China marrying DNA profiles and other biometric information with other real-time surveillance tools, such as facial recognition technology and the complete monitoring of online activity, in what UC Berkeley adjunct professor Xiao Qiang calls a "digital totalitarian state."

China's efforts have not gone unchallenged, however. In 2013, police in eastern China faced backlash when they swabbed 3,500 students as part of a probe into cell phone thefts and computers on a college campus. Chinese media joined public criticism; "Just because police want to solve every case," one newspaper editorial read, "doesn't mean they can go after so many innocent people."

In 2015, China's Ministry of Public Security said that it was impractical and premature to record the DNA of all citizens, because it would create major ethics and privacy concerns. In other countries such as Kuwait, Portugal and the U.K., efforts to establish massive DNA databases have been struck down or backtracked after public opposition, along with a decision by the European Court of Human Rights - which ruled in 2008 that maintaining a database of innocent people's DNA breached the "right to respect for private life."

In China, on the other hand, anyone stopped in the street by police can be shaken down for their DNA.

Huang Quanlai, a 22-year-old who sorts packages for a living, said he was hauled from a public square in Shenzhen while chatting with his brother one evening last winter. Cops bundled them into a van after the brothers could only show national identification cards, not local residence permits, Mr. Huang said.

Huang was released with no further explanation after police forced him to give a blood sample. “That had happened to my friends before,” said Mr. Huang, adding that he wasn’t too worried by the experience. “I didn’t do anything anyway.”

In the oil town of Doqing, authorities require all new residents give biological samples due to the heavy migrant population, which police say are statistically more likely to commit crimes. After collecting over 340,000 DNA profiles, however, police say only 136 crimes were solved using the samples.

In Xinjiang, a Muslim Majority region mired in violence and terrorism, authorities are collecting DNA samples from all residents between the ages of 12 and 65.

The technology to collect and analyze the DNA comes from American company, Thermo Fisher Scientific, Inc., which hosted a DNA conference in Vienna last year that featured Chinese forensic scientists as guest speakers. The "Jack the Ripper" case won second place the conference's "Hit of the Year Award" - a prize sponsored by Thermo Fisher.

One provincial police force at the DNA conference said that there is a "dire need" for legislation to "ensure collection can go smoothly, and protect the rights of people."

We won't hold our breath...