2017 saw global central bank balance sheets explode almost 17% higher (in USD terms) - the biggest annual increase since 2011 - and while correlation is not causation, one can't help but see a pattern in the chart below...

Global stocks up, Global bonds up, Global commodities up, Financial Conditions easier (despite 3 Fed rate hikes), and Dollar down (most since 2003)... 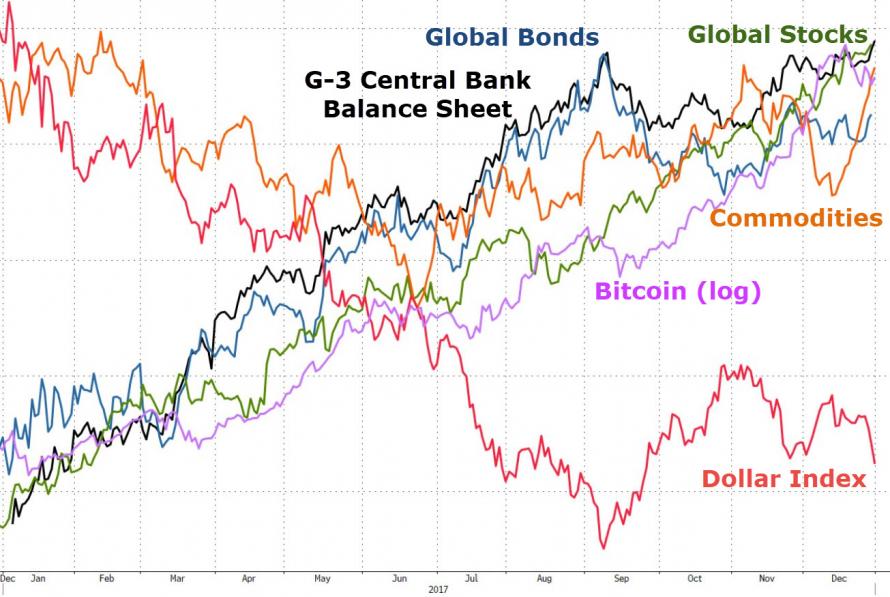 As we noted earlier,  Craig James, chief economist at fund manager CommSec, told Reuters that of the 73 bourses it tracks globally, all but nine have recorded gains in local currency terms this year.

“For the outlook, the key issue is whether the low growth rates of prices and wages will continue, thus prompting central banks to remain on the monetary policy sidelines,” said James. “Globalization and technological change have been influential in keeping inflation low. In short, consumers can buy goods whenever they want and wherever they are.”

Still, the good times may not last: an State Street index that gauges investor risk appetite by what they actually buy and sell, suffered its six straight monthly fall in December, Reuters reported.

"While the broader economic outlook appears increasingly rosy, as captured by measures of consumer and business confidence, the more cautious nature of investors hints at a concern that markets may have already discounted much of the good news,” said Michael Metcalfe, State Street’s head of global macro strategy.

As 2017 winds to a close, Bloomberg reports that a look at the winners and losers around the globe shows that, broadly speaking, the riskiest assets performed well, with bullish sentiment on display in stocks, emerging-market sovereigns and corporate debt. Securities generally seen as the safest and least volatile bets -- think Japanese government bonds -- trailed behind.

Here's the best and worst performers in various asset classes over the past year:

Venezuelan equities soared 3883% in 2017 in USD terms (based on the 'official' currency), but that return is destroyed when one adjusts for the 3450% hyperinflationary surge in the number of 'street' bolivars needed to buy a USD... 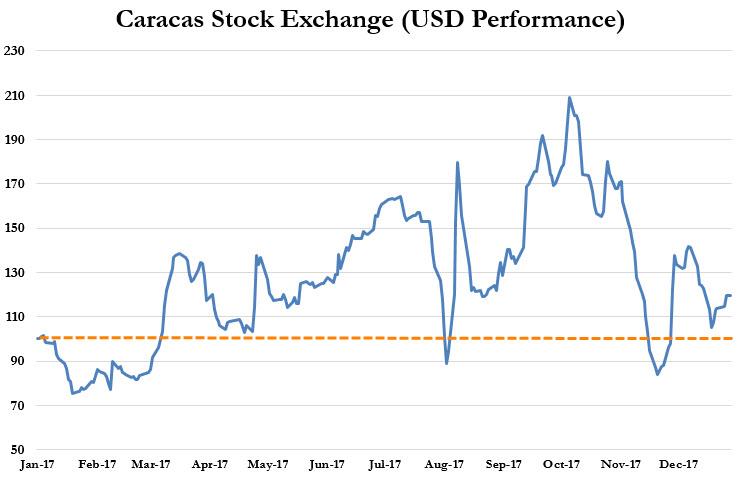 The performance is likely a lot less since the noise in the index and the FX rate is incredible.

While Mongolian stocks were best in USD terms, bulls in Ukraine had a good year after the International Monetary Fund said in May that it sees “welcome signs of recovery” for the economy and “a promising basis for further growth.” It was part of a broader rally in emerging markets as investors flocked to developing nations in hopes of higher returns.

It wasn’t a good year, however, to have bet on stocks in Qatar, UAE, Russia, or Pakistan. The Persian Gulf country was thrown into chaos mid-year when Saudi Arabia, the United Arab Emirates, Bahrain and Egypt cut diplomatic and transport ties. In Pakistan, the index was coming from a high base, but also suffered from foreigners pulling money out of the market. 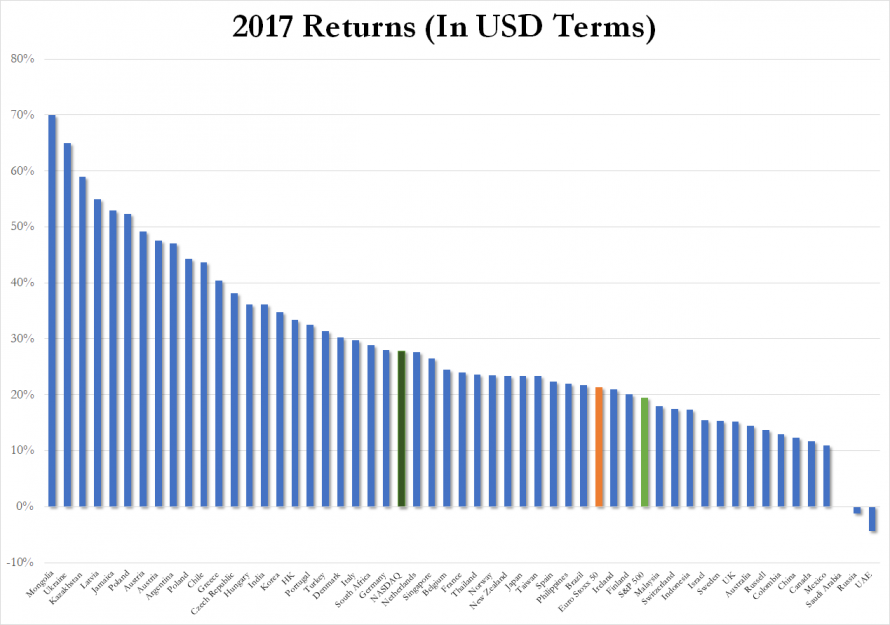 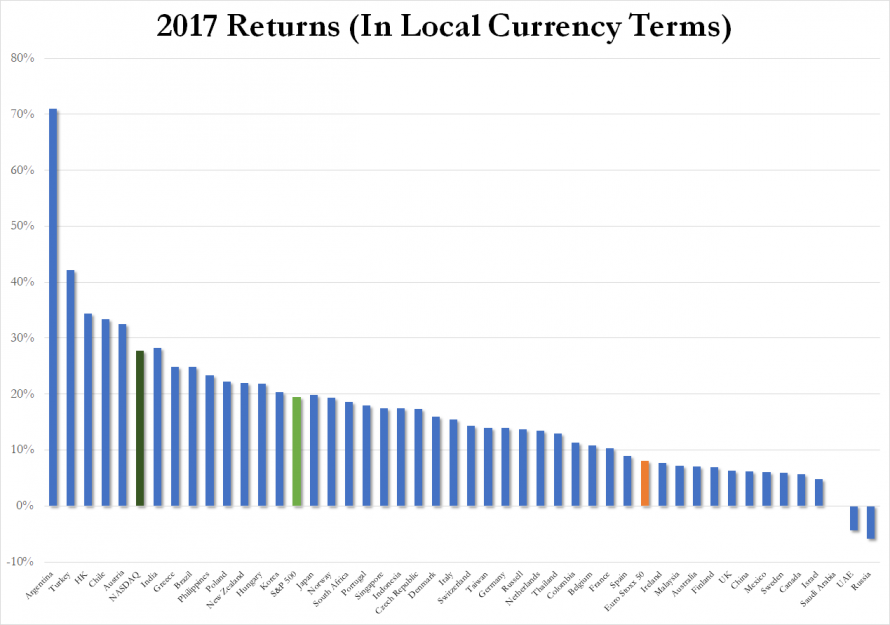 As Bloomberg reports, the three-decade bull run for fixed income rolled on in 2017, defying yet again predictions that faster inflation and tighter monetary policy would bring it to an end.

The bond world’s best performers were yesteryear’s losers, with Greece and Argentina among the standouts.

It took effort to lose money on bonds this year -- the Japanese central bank’s stitch-up of its government-debt market, and Venezuela’s economic collapse made those two the worst performers in the developed and emerging categories, respectively. 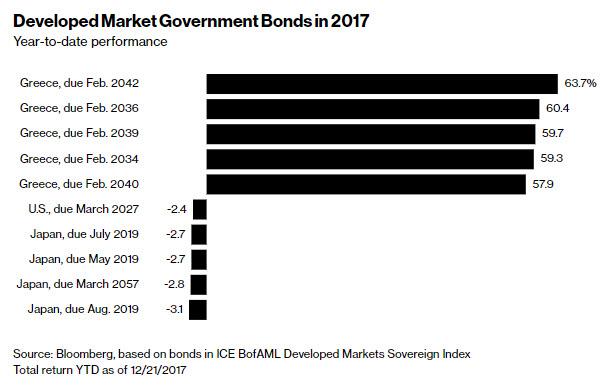 Tiny Belize earned top marks in the emerging government-debt category after an upgrade from Moody’s Investors Service in April. 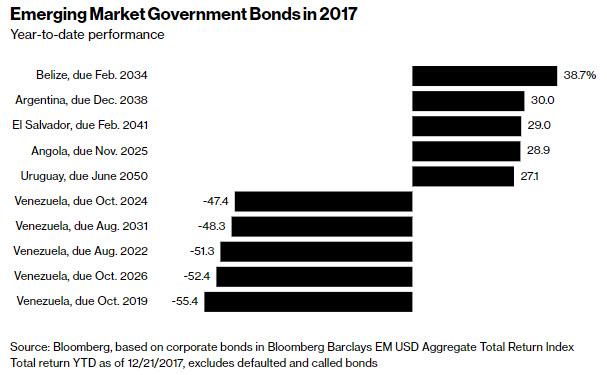 Turning to the corporate-debt world, U.S. high-yield securities saw a wide dispersion of results, from high-flying food-and-beverage, retail and transport companies to trauma for holders of bonds sold by commercial printer Cenveo Corp. 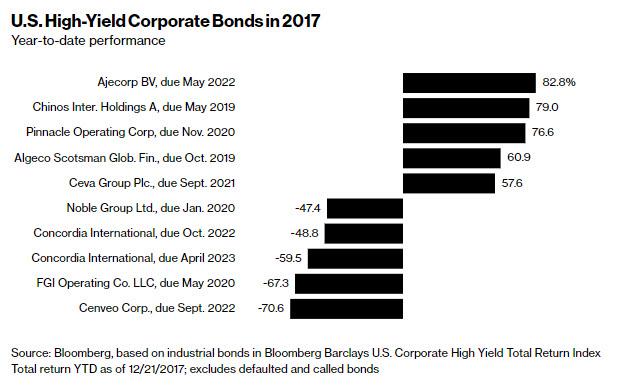 In the emerging-market corporate debt category, an Indonesian energy company topped the list, while securities tied to Brazilian construction giant Odebrecht SA -- which is embroiled in a corruption scandal that stretches across South America -- proved to be ones to avoid. 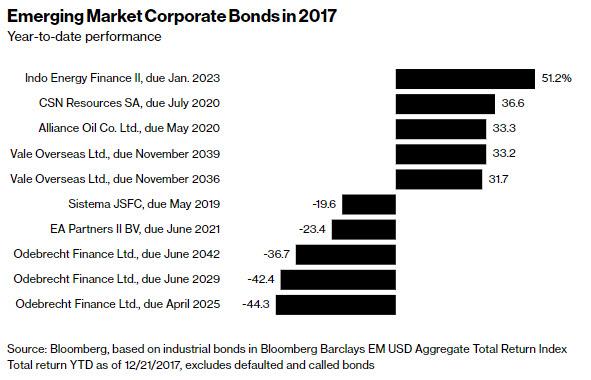 Palladium, which is typically used in pollution-control devices for gasoline vehicles, led gains in precious metals this year by climbing more than 50 percent as investors bet on increased usage in vehicles. Copper and aluminum bulls also had a great year. Those gains were largely tied to better economic prospects across the globe, which would mean higher usage of industrial metals.

On the down side, sugar and natural gas had a bad year. The sweetener has been falling on concerns of a global surplus, while natural gas recently hit a 10-month low following two warm winters that left stockpiles at high levels. 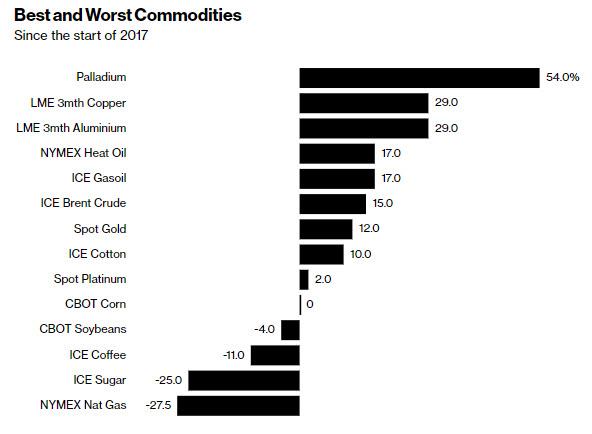 The biggest gainer in the currency space is a bit on the obscure side: the Mozambique new metical. The East African country has struggled to control inflation following a debt crisis, but the central bank has said it wants to achieve a lower and more stable rate.

On the down side, the Uzbek soum tumbled after the gold-rich republic removed the currency’s peg to the dollar. 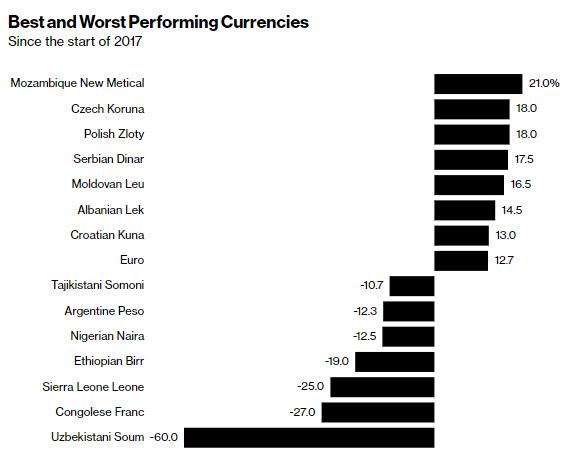 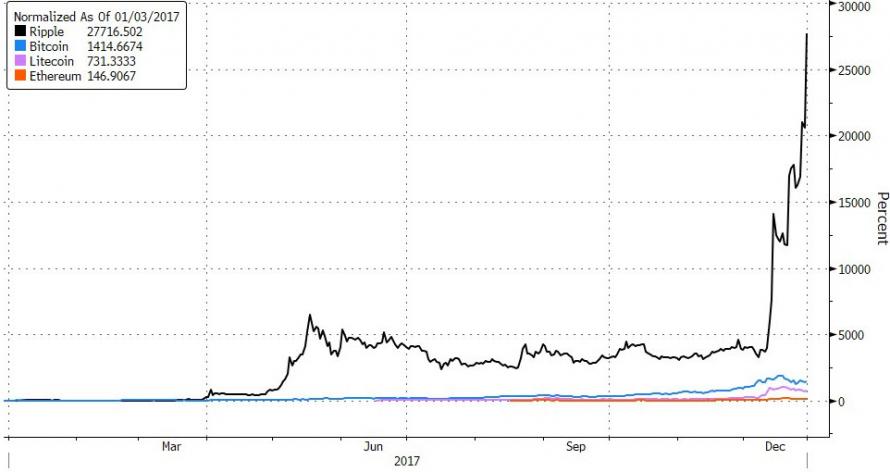