The Greatest Bubble Ever: Why You Better Believe It - Part 1

During the 40 months after Alan Greenspan's infamous "irrational exuberance" speech in December 1996, the NASDAQ 100 index rose from 830 to 4585 or by 450%. But the perma-bulls said not to worry: This time is different----it's a new age of technology miracles that will change the laws of finance forever.

It wasn't. The market cracked in April 2000 and did not stop plunging until the NASDAQ 100 index hit 815 in early October 2002. During those heart-stopping 30 months of free-fall, all the gains of the tech boom were wiped out in an 84% collapse of the index. Overall, the market value of household equities sank from $10.0 trillion to $4.8 trillion----a wipeout from which millions of baby boom households have never recovered.

Likewise, the second Greenspan housing and credit boom generated a similar round trip of bubble inflation and collapse. During the 57 months after the October 2002 bottom, the Russell 2000 (RUT) climbed the proverbial wall-of-worry----rising from 340 to 850 or by 2.5X.

And this time was also held to be different because, purportedly, the art of central banking had been perfected in what Bernanke was pleased to call the "Great Moderation". Taking the cue, Wall Street dubbed it the Goldilocks Economy----meaning a macroeconomic environment so stable, productive and balanced that it would never again be vulnerable to a recessionary contraction and the resulting plunge in corporate profits and stock prices.

During the 20 months from the July 2007 peak to the March 2009 bottom, the RUT gave it all back. And we mean every bit of it----as the index bottomed 60% lower at 340. This time the value of household equities plunged by $6 trillion, and still millions more baby-boomers were carried out of the casino on their shields never to return.

Now has come the greatest central bank fueled bubble ever. During nine years of radical monetary experimentation under ZIRP and QE, the value of equities owned by US households exploded still higher----this time by $12.5 trillion. Yet this eruption, like the prior two, was not a reflection of main street growth and prosperity, but Wall Street speculation fostered by massive central bank liquidity and price-keeping operations.

Nevertheless, this time is, actually, very different. This time the central banks are out of dry powder and belatedly recognize that they have stranded themselves on or near the zero bound where they are saddled with massively bloated balance sheets. So an epochal pivot has begun----led by the Fed's committement to shrink its balance sheet at a $600 billion annual rate beginning next October. This pivot to QT (quantitative tightening) is something new under the sun and was necessitated by the radical money printing spree of the past three decades.

What this momentous pivot really means, of course, is ill understood in the day-trading and robo-machine driven casinos at today's nosebleed valuations. Yet what is coming down the pike is nothing less than a drastic, permanent downward reset of financial asset prices that will rattle the rafters in the casino.

This time is also very different because there will be no instant financial market reflation by the central banks. And that means, in turn, that there will be no fourth great bubble, either. Here's why.

That's implicit in Wall Street's dismissal during 2017 of two fundamental policy messages that emerged from Washington officialdom. These signals strike at the very heart of the current stock market mania and scream-out "rising yields ahead" to a casino that has "priced-in" ultra-low interest rates as far as the eye can see.

To wit, the Fed is now on automatic pilot---set to drain cash from the canyons of Wall Street at a $600 billion annual rate by Q4. At the same time, the political goulash known as Trumpian government has thrown fiscal caution entirely to the winds, and has essentially now enacted the most asinine fiscal borrowing spree known to history.

As we have recently pointed out, ground zero of the impending bond market conflagration is FY 2019, which incepts exactly 276 days from now during the same window of time (Q4) as the Fed hits full stride on its bond dump-a-thon. Yet on top of CBO's most recent but now obsolete FY 2019 deficit deficit projection of $700 billion, the Trumpian GOP is adding $200 billion for defense, disasters, border control, ObamaCare insurance bailouts and other domestic boodle; and on top of that, now comes its vaunted front-loaded tax cut, which will rip $280 billion out of Uncle Sam's revenue collections in the same year.

Then, throw in $100 billion extra for interest on the higher debt and off-budget borrowing (e.g. $80 billion for student loans). What you get is Uncle Sam fixing to sell $1.28 trillion of debt---equal to 6.2% of projected GDP---at the same time the Fed is dumping another $600 billion of existing treasury and GSE paper.

Folks, they most assuredly did not repeal the laws of supply and demand. Indeed, as we stumble toward this FY 2019 public sector debt tsunami, the household savings rate has plummeted to virtually a pre-crisis low at 2.9% of disposable personal income. Accordingly, we have every reason to believe that consumers will use their temporary tax cut windfall to pay-down their own debt, not accumulate the bills and bonds Uncle Sam will be dumping on the market. The only other category left is foreign buyers---private investors and central banks alike---but that source of "demand" for Uncle Sam's emissions is fixing to dry-up, as well. And that will be especially true for private European and Japanese investors---who have poured into the dollar bond markets in search of yield and to escape their own yield-free local currency alternatives.

The fact is, this off-shore rescue brigade of the last few years depended upon radical central bank easing in their home markets, which drove these investors and speculators into the dollar markets in search for yield; and, crucially, it also required a yield differential in favor of dollar securities sufficiently wide to cover the carry cost including the inherent FX hedging expense.

Alas, those artificial props are falling by the wayside. The ECB will be out of the bond-buying business by the fall of 2018, the PPBOC is now desperately trying to drain liquidity from its own booming credit Ponzi and even the bank of Japan is slowing down it purchase rate---perhaps because its balance sheet is already approaching absurdity at 100% of  GDP.

In all, what was a $1.3 trillion central bank bond purchase rate earlier this year will fade to nearly zero in 2019; and then it will become a large cash drain as central banks shrink their balance sheets in the context of hyper-bloated global financial markets.

Stated differently, what is "priced-in" to the world's risk asset markets is central bank footings of $22 trillion-----not the $6 trillion level prior to the financial crisis or the $17-18 trillion level now being targeted for the end of the QT/normalization campaign.

What is worse, however, is that on top of this epochal central bank pivot to QT (quantitative tightening), there also comes the abrupt change of the corporate tax regime now enacted into law. That is, the switch from a worldwide income to a territorial income based levy will throw a giant monkey wrench into the works---causing dollar funding costs in FX and swap markets to soar as the trapped cache of un-repatriated earnings of US corporations are brought home.

On the one hand, the  resulting reflow of some $2.8 trillion of off-shore dollars does not exactly count as a new source of financing for the domestic US treasury market. Uncle Sam intends to take an average 13.5% level from any repatriated funds, and that $130 billion in FY 2018-2019 (and $339 billion over the decade) is already built into the net cost of the tax bill.

Moreover, the untaxed portion of these allegedly "trapped" off-shore funds were not exactly stuffed into a corporate shoe-box. More often than not these assets functioned as collateral for dollar borrowings in the domestic US markets---with Apple (APPL) being the obvious poster boy case.

Yes, APPL has $275 billion of cash-like assets parked abroad in Ireland and other tax havens, but even as it floated on a sea of cash, Apple has also borrowed $115 billion to fund domestic investments----mainly investments on Wall Street in the form of stock buybacks.

So after-tax reflows of corporate cash are likely to finance the unwinding of previous tax law arbitrages like Apple's or be applied to funding current financial engineering maneuvers including stock repurchases and M&A deals.

In short, the mandatory one-time repatriation tax grab of $339 billion over the next decade by Uncle Sam will likely cascade in many complex directions, but the first use will almost certainly not be to buy US government debt at today's 2.43% yield on the 10-year benchmark issue.

But what is certain is that the mandatory repatriation tax just passed by Congress will reinforce the global off-shore dollar shortage that is inherent in the Fed's normalization and QT campaign. That means hedging costs will rise and the currency-adjusted returns on foreign-investor owned US treasury paper will fall---and could actually disappear entirely if the basis swap becomes increasingly negative.

For instance, the Japanese financial institutions tend to use 3-month FX forwards when they invest in hedged foreign bonds. Annualized hedge costs have recently risen to 2.33%, which means that yen-based investors in 10-year US Treasuries at today's yield of 2.43% would end up with virtually no return.

In short, this time is truly different because the impending, spectacular late-cycle collision of US fiscal and monetary policies is sure to rock the $100 billion global bond market with severe, cascading ripples of downward pricing adjustments (i.e. higher yields and wider spreads). Yet the entire price structure of the equity market incorporates the previous era of drastically repressed yields.

In our judgment, a large share of the $15 trillion of US stock buybacks and M&A deals over the last decade would not have happened---save for the ultra-low after-tax cost of debt. For instance, mega-M&A deals by investment grade companies always look accretive to earnings because they have been 85% cash/debt financed at a weighted average after-tax cost of under 2.0%.

Likewise, the scramble for yield has funded a massive revival of the junk loan and bond markets---with combined outstandings now pushing $4 trillion or more than double the 2007 level. On the margin, virtually every dollar of that $2 trillion gain went into the liquidation of corporate equities via LBO's and leveraged recaps.

In a word, a huge chunk of the over-valuation in today's stock markets reflects the cheap debt fueled financial engineering "bid" for stocks that will be literally monkey-hammered by the central bank pivot to QT---compounded by the fiscal insanity of the Trump-GOP debt binge.

In that context, the insouciant complacency in today's casino is all the more remarkable---and dangerous. The VIX index average during 2017 came in at 11.1. That is the lowest reading ever — by more than one and a half points — since the VIX inception in 1986. By way of comparison, the daily average for all years since then was over 20.

Likewise, the maximum level reached by the VIX in 2017 was 17.3. That's the lowest maximum level attained in any year since inception----and 60% lower than average. 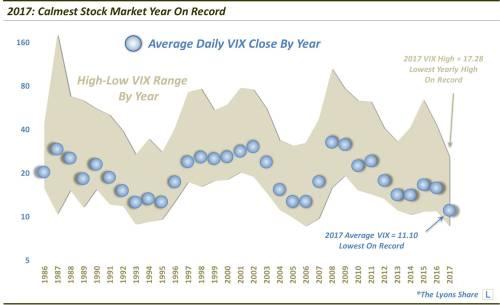 And that's what ultimately makes this time so very different.

Valuation levels have never been higher relative to income and forward prospects. Central banks have never been on the precipice of a multi-trillion cash extraction and pivot to QT. And nine years of central bank fostered bubble inflation and fake recovery have never rendered the casino so complacent.

In all, we'd say Wall Street is calling the sheep to the final slaughter. At the moment, in fact, the bleating is so loud that the gamblers are seriously debating whether the 50X gain in bitcoin in just 22 months is sustainable. But that's surely derangement at Tulip Mania scale, as we will further consider in Part 2.