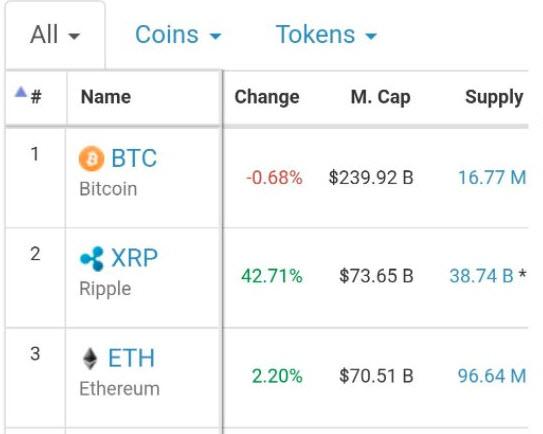 As the recent rotation from Bitcoin, Litecoin, and Ethereum into Ripple (XRP) continued overnight. 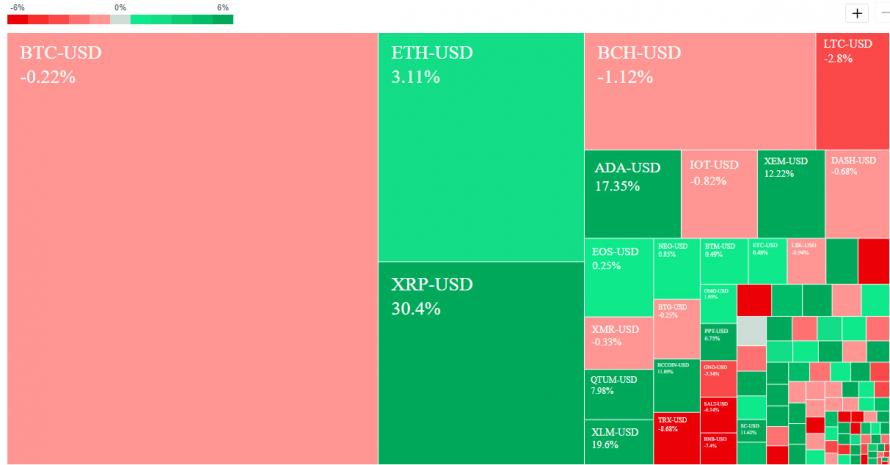 One thing of note is that BTC and ETH both erased the South Korea headline plunge losses overnight (before fading lower once again)... 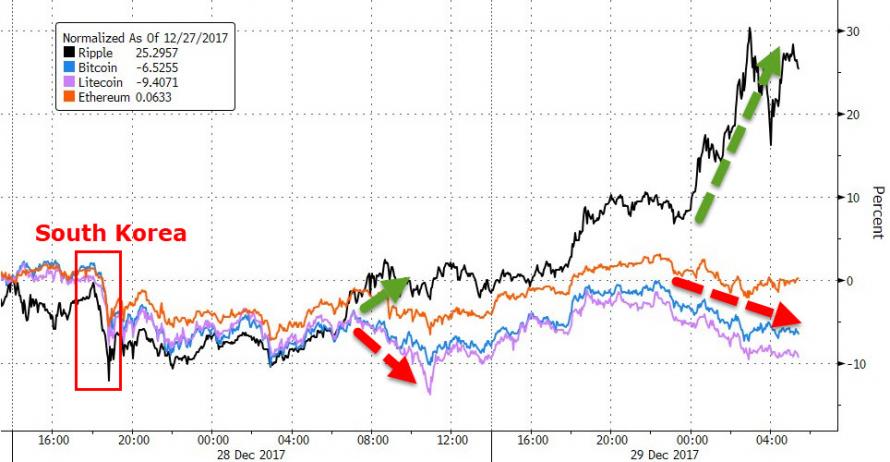 As BI reports, Ripple, which is up about 61% over the past week and more than 5,000% this year, has been on a tear since Ripple's Asian subsidiary and a group of Japanese credit-card companies announced a new consortium Wednesday. The consortium aims to identify how blockchain and distributed-ledger technology can be deployed in credit-card payments.

The news of the consortium follows a bullish month for the coin, which has been propelled to new heights by interest from Asia, according to reporting by Forbes.

A modest pullback in XRP has left ETH back in 2nd place for now, but it's close... 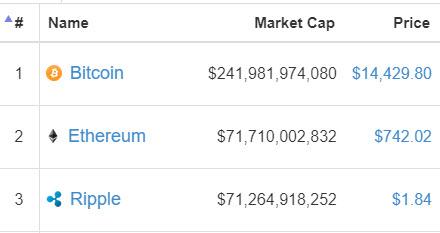 In other notable news in the crypto space, CoinTelegraph  reports that The new SegWit2x, a revival of the original hard fork designed to help with the scalability issues of Bitcoin, was scheduled to happen at Bitcoin block number 501451. That block was mined at around 6PM UTC, Dec. 28, and the team behind the project announced its official launch:

Reports began surfacing over the past several days that focused on several inconsistencies on the project’s home page.

First and foremost, the team behind the new fork has nothing to do with the people behind the original New York Agreement and the SegWit2x that was cancelled in November.

They have even admitted it themselves in a chat with the Finance Magnates news site. There is very little information available online about the team members listed on the official website. For example, the project’s supposed founder, Jaap Terlouw, only has a half-empty LinkedIn profile. There he claims that he is the ‘main developer’ of the new SegWit2x, with no other sources to corroborate his status as a ‘developer.’

Moreover, the project’s GitHub account is just 9 days old as of press time, which makes it even younger than some of the earlier announcements of the upcoming fork in the press.

Adding to the list of concerns, the code stored in that GitHub account indicates that the team members were planning to assign themselves 6 mln premined coins, a whopping 28% of the total supply of 21 mln

This constitutes an incredible degree of control over the project that some would argue a scrupulous team should not have. Likewise, it represents an enormous (and instant) potential profit to the team members. This could encourage a quick pump-and-dump.

But, topping the list of reasons for suspicion is the bizarre promise to issue “a proportional number of Satoshi Nakamoto`s Bitcoins” to all BTC holders after the fork takes place. No indication has been offered of how would the team actually be able to access the coins that have been held by the mysterious creator of Bitcoin since the earliest days of its existence.