By Nicholas Colas, from DataTrek Research

It’s that time of quarter again; today we review our “Off the Grid” economic indicators. And they all look pretty good in terms of launching the American economy into 2018. Pickup truck sales and used car prices remain robust, and there’s some actual inflation in our Bacon Cheeseburger Index. One warning: “Bitcoin” is among the top Google search autofills for the phrase “I want to buy…

We started our “Off the Grid” economic indicators in the aftermath of the Financial Crisis as a way to dig deeper into the longer-lasting effects of that event on the American consumer. It seemed to us that standard economic measures like unemployment or CPI inflation missed a lot about the state of the country. So we started gathering up a list of intuitive metrics that could fill those gaps.

A few examples from these datasets over the years:

#1 Participation in the Supplemental Nutrition Assistance Program (commonly called Food Stamps) went from 26 million Americans in November 2006 to a high of 48 million in late 2012. At that high water mark, 16% of the entire US population needed government support to put food on the table. And since participation in the program is based on income, this meant a substantial portion of the US population was living at/near/below the poverty line.

The latest data is more upbeat: as of August 2017 (latest data available), there are 41 million people enrolled in the program. Some of this reduction comes as states return to pre-Crisis rules for program participation, and some comes from rising incomes that allow households to exit the program. Another positive: Google searches for “Food Stamps” are back to pre-Crisis levels after a blip higher in the wake of the hurricanes in Florida and Texas.

#2 During the Financial Crisis and its aftermath, Americans bought large amounts of gold and silver coins as a hedge against instability in the banking system. In any given month from 2009 to 2013, the US Mint shipped over $100 million in gold coins and $75 – 100 million in silver coins to dealers for retail sale.

Demand for gold and silver coins in the US is now a fraction of those levels, averaging just $15 million and $7 million, respectively, per month in the second half of 2017. Google search volume data confirms the decline in interest, with “Gold coin” queries lower than at any point since 2004 (the start of the time series).

Just as important, sales of large pickup trucks have been stable since 2014, growing at mid-single rates even as overall vehicle sales have plateaued. That’s a positive sign – small businesses don’t buy pickups for show. These are work vehicles, and an investment in a new one means they see business conditions remaining strong in 2018.

With those three examples, you get the idea: the US economy has not only recovered from the Financial Crisis, but in many ways is firing on all cylinders. Our other OTG indicators generally point to the same conclusion.

Despite many pundits predicting their decline, used car prices are holding up well. The Manheim Used Vehicle Index (real price data from thousands of auctions) is our data source here. Their November 2017 reading is up 7.8% from last year. And since new car buyers almost always trade in their existing vehicle to buy a new one, higher used car prices effectively lower the cost of purchasing a new vehicle. 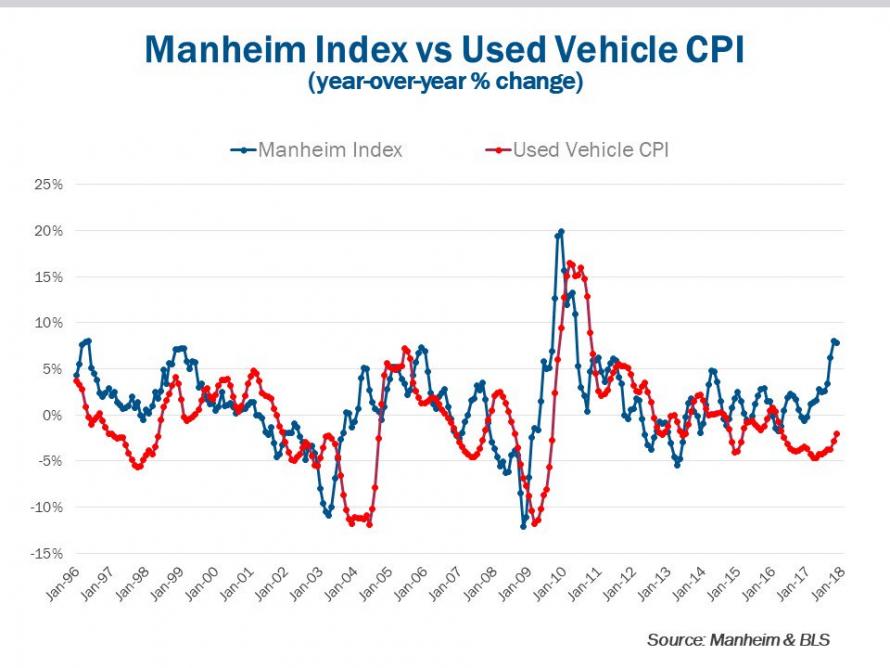 New vehicle inventories at dealer lots are currently at a seasonally normal 71 days supply. The caveat here: the hurricanes in Florida and Texas destroyed hundreds of thousands of cars and trucks. Selling rates in Q4 were therefore higher than usual, and “Days supply” is based on current rates. But given a strong economy, we are not overly worried that sales will fall off a cliff in the New Year.

The amount of cash spent by the average American on a daily basis is up to $98/day, a post-Crisis high. (Source: Gallup Organization)

We’ve seen a lot of change in Google’s autofill suggestions for “I want to buy” and “I want to sell”. Recall that the search engine tries to complete your partially entered query with words commonly used by other users. In Q4 2017, the most common thing users finished “I want to buy” was “a timeshare” (an obviously discretionary purchase). It dethroned “House”, which has been the most common entry since Q2 2015.

A word of warning: “Bitcoin” has never made it into the top 4 autofills for “I want to buy”. Until now. 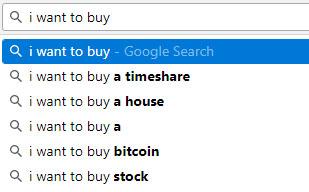 We measure visible consumer inflation with our “Bacon Cheeseburger Index (BCI)”, equal weights of ground beef, cheese and bacon price data from the Consumer Price Index data. Good news here for the US Federal Reserve: consumers should start feeling a little more inflation in 2018. After a long bout of cheaper inputs for America’s favorite meal (well, mine anyway), the BCI is up 1.4% year over year. A year ago at this time, it showed a -5.7% decline.

Our “Take This Job and Shove It” indicator is also in very healthy territory. This is a measure of quits as a percentage of total separations from the monthly JOLTS data. In October 2017, 61.4% of workers who left their jobs did so with a resignation letter rather than a pink slip. That’s not quite as high as the record 62.2% in September 2016, but still quite strong. And since Quits/Total Separations is a good proxy for Consumer Confidence, that important economic barometer has a full head of steam as we enter 2018.

The bottom line here: with few exceptions (Food Stamps, notably), the US economy is in exceptionally strong shape as we enter 2018. Small business confidence is strong, and savers do not see the need to hedge their bank accounts with gold coins. Timeshare salespeople are busy. Inflation that consumers use to anchor their expectations is rising at a modest pace.

All that may be “Off the Grid”, but it gives us confidence that the standard – and currently quite bullish - economic data is actually on the mark.