Back in September 2015 - long before bitcoin became the "world's biggest bubble in history", and when it was still trading at just $200 - we explained not only that the primary purpose behind the use of the cryptocurrency was evading capital controls, but predicted that it would rise much, much higher as more Chinese, and not only, money launderers caught on to the real function of bitcoin and other cryptos, to wit:

... we would not be surprised to see another push higher in the value of bitcoin: it was earlier this summer when the digital currency, which can bypass capital controls and national borders with the click of a button, surged on Grexit concerns and fears a Drachma return would crush the savings of an entire nation. Since then, BTC has dropped (in no small part as a result of the previously documented "forking" with Bitcoin XT), however if a few hundred million Chinese decide that the time has come to use bitcoin as the capital controls bypassing currency of choice, and decide to invest even a tiny fraction of the $22 trillion in Chinese deposits in bitcoin (whose total market cap at last check was just over $3 billion), sit back and watch as we witness the second coming of the bitcoin bubble, one which could make the previous all time highs in the digital currency, seems like a low print.

A little over two years later, and several thousand percent higher, we were right on both counts: not only did bitcoin proceed to soar to meteoric highs, but the Chinese capital outflows were just getting started and only a series of draconian interventions by China in 2016 managed to briefly halt the hot money exodus which amount to roughly $1 trillion in Chinese reserve outflows.

We said "briefly" because despite its closed "capital account", no government can ever hope to halt the flight of nearly $40 trillion in deposits (and countless trillions invested across China's securities).

And while China has been doing everything in its power to halt the capital flight, or at least give the impression there no longer is one, going so far as the central bank directly manipulating the currency by directly crushing the shorts in terminal short squeezes and margin calls to telegraph to the world that there is no legitimate capital flight, actions out of China suggest otherwise, and it now appears that - in the latest good news for bitcoin bulls - China is once again cracking down on capital controls as hot money outflows have not only not stopped, but may again be accelerating.

According to the SCMP, to gree the New Year, Beijing will implement new limits on the amount of money people can withdraw from their Chinese bank accounts while overseas, "in the latest move by Beijing to tighten its capital account controls and curb money outflows."

Under the new rules individuals will be allowed to withdraw a maximum of 100,000 yuan (US$15,000) a year, regardless of how many separate bank accounts or ATM cards they have, China's FX regulator, the State Administration of Foreign Exchange said in a statement released on Saturday.

Under current rules, there is an annual ATM withdrawal cap of 100,000 yuan per bank card, but there are no rules to stop people having multiple cards attached to a single account or multiple accounts with different banks. So apparently, the PBOC finally figured out the oldest trick in the book that Chinese residents were using to game the regime.

Meanwhile, the existing cap on daily withdrawals remains unchanged at 10,000 yuan per card. People will still be allowed to hold multiple ATM cards but the annual limit will apply to the combined value of all withdrawals. 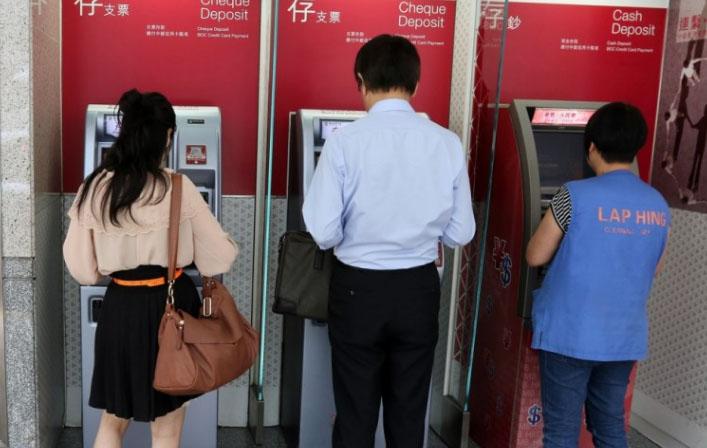 The annual cap of 100,000 yuan per person and daily limit of 10,000 yuan applies to all ATM cards issued by mainland Chinese banks, covering both yuan and foreign exchange accounts.

What is the punishment for violating the latest capital control? The foreign exchange regulator said that if any Chinese is found using mainland bank cards to withdraw more than 100,000 yuan from overseas ATMs within a calendar year, they will be barred from taking out cash abroad using any mainland bank card for the rest of the year as well as the following year.

The restrictions were a “necessary measure” to curb money laundering, terrorism financing and tax evasion, the regulator said.

“International experiences have shown that large cash transactions are often associated with criminal activities such as fraud, gambling, money laundering and terrorism financing,” the statement said.

What SAFE really meant is that despite Beijing's best attempts, capital flight was continuing.

The regulator also said that "some" Chinese had been found to have used a large number of ATM cards to withdraw sums of cash overseas that far exceeded what was needed for “normal consumption”, according to the regulator.

It also warned Chinese not to try evading the rules. “People should not borrow other people’s bank cards or lend them to others to help get around the regulation,” the statement said.

And just like every other time China cracks down on capital flight, it will merely force even more to use cryptocurrencies to circumvent attempts to halt moneyflows, which needless to say, is very bullish for the entire crypto space.

Putting China's closed capital account in context, China’s capital controls are among the most restrictive of the world’s major economies, and Beijing has tightened rules on outbound remittances and payments in the past two years as a way to defend the country’s foreign exchange reserves and yuan exchange rate, something we have covered extensively in the past 3 years.

At the top-level, mainland Chinese can change up to US$50,000 worth of yuan into foreign currencies per year, but the regulator has set extra requirements within that quota including filling in forms and declarations for any purchases. Naturally, the $50K quota is only for mere mortals: Chinese political oligarchs, princelings and corporate barons are largely exempt from the rules, simply because they know the loopholes, chief among which remains use of bitcoin and other cryptos.

Separately, the regulator said the cap on foreign currencies would remain unchanged and the new rule should not affect ordinary Chinese wanting to travel and spend money abroad.

Some 81% of the overseas cash withdrawals made using mainland Chinese ATM cards last year totalled around 30,000 yuan per card, according to the regulator. It said the annual cap of 100,000 yuan should “both meet demand for normal cash withdrawals abroad and contain the large sums made by a few lawbreakers”.

But before Vancouver and Toronto real estate agents panic and liquidate all inventory on fears the Chinese "hot money" flood will shortly cease, keep an eye on the price of bitcoin: with Beijing once again cracking down on conventional money transfer means, i.e., debit and credit cards, the only avenue left will be cryptocurrencies.

Come to think of it, it's about time the Chinese again regain their place as the world's largest marginal price setters of bitcoin, once again dethroning Japan and South Korea for the crypto-throne.