US State Department Hints At Iran Overthrow: Are We Witnessing The Early Stages Of Regime Change?

The US State Department has issued a formal condemnation of the Iranian government following two days of economic protests centering in a handful of cities, calling the regime "a rogue state whose chief exports are violence, bloodshed, and chaos" while announcing support for protesters. It fits a familiar script which seems to roll out when anyone protests for any reason in a country considered an enemy of the United States (whether over economic grievances or full on calling for government overthrow). 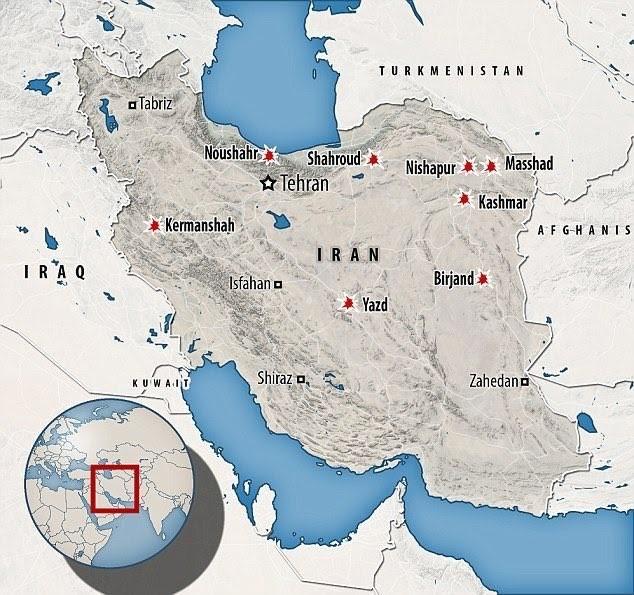 Map via The Daily Mail

The statement by spokesperson Heather Nauert, released late on Friday, further comes very close to calling for regime change in Iran when it asserts the following:

On June 14, 2017, Secretary Tillerson testified to Congress that he supports "those elements inside of Iran that would lead to a peaceful transition of government. Those elements are there, certainly as we know." The Secretary today repeats his deep support for the Iranian people.

Though most current reports strongly suggest protests are being driven fundamentally by economic grievances, the US has already framed this week's events inside Iran as revolutionary in nature and as aiming for "transition of government". On Friday evening White House Press Secretary Sarah Huckabee Sanders tweeted the following statement:

Reports of peaceful protests by Iranian citizens fed up with the regime’s corruption and its squandering of the nation’s wealth to fund terrorism abroad. The Iranian government should respect their people’s rights including their right to express themselves. The world is watching.

The media is already promoting a regime change narrative

As we noted during our initial coverage of Thursday's protests, Israeli as well as Iranian opposition media commentators (and of course pundits in the US mainstream) have generally appeared giddy with excitement at the prospect that protests could spread inside Iran, potentially culminating in society-wide resistance and possible change in government. It goes without saying that Iran has been enemy #1 for the United States and Israel since the Islamic Revolution and embassy hostage crisis beginning in 1979.

Consider for example this major Israeli international broadcast network, which in an English language interview segment covering the very beginnings of (relatively small and limited) protests Thursday quickly linked the Tehran government with use of chemical weapons in Syria, supporting the "biggest butcher in this region Bashar al-Assad", and facilitating the killing of civilians:

#Iran protests: this might be #Rouhani's chance to force the economic reform he's been long clamoring for, @MeirJa tells @talexander_i24 pic.twitter.com/Pog57xkKKU

Simultaneously the resident "expert" presents the protesters as condemning these things while yearning for freedom and democracy. He can barely contain himself while repeating "It's spontaneous! It's spontaneous!... and could be more spontaneous! ...it inspires people to go out more! ...Because it's spontaneous these two are combustible mixtures":

Other tweets and statements from the generally pro regime-change media and the experts which frequent their panels seem very eager to prematurely cast this as a 'revolution':

Imagine a free, democratic, independent, wealthy Iran. Giving full expression to beauty of Persian culture. Tapping into brains & spirit of its remarkable people. No nukes. At peace with its neighbors. Pray for peaceful end to this brutal & corrupt regime. #IranProtests

Advice for #Iranprotests, if you really want to change things -- I mean the regime: Focus on Tehran. Treat the front-line police and army conscripts with respect and humanity -- try to bring them onside. Take over broadcast stations.

#iranprotests are very different than 1999 and 2009 protests. This is the most vehemently anti regime event I've ever seen. Not just about the economic situation, but a deep and desperate cry against an unjust and repressive system.

Listen to the sounds of the kid asking for his mom at the protest in Iran’s Rasht. Look at the kids around. Parents coulda left them at home with grandparents. But they wanted them to see, to plant seeds for next generation. pic.twitter.com/Cu7GUmNIJz

#IranProtests: How and where the regime opposes women’s rights https://t.co/uMQPnHhQ5M pic.twitter.com/cmZ4ISEZ6E

...And notably (just above) the Saudi royal family owned Al-Arabiya is presenting the Iran protests in terms of women's rights.

Further to this point, the always excellent Moon of Alabama blog explores the possibility that what we are witnessing is the beginning of a covert regime change operation in Iran, similar the story of the war in Syria.