A confidential document found on Anthony Weiner's laptop reveals that the United States Embassy in Stockholm, Sweden expressed concerns in 2010 that WikiLeaks would release classified US documents related to Sweden ahead of the September 19 Swedish election, tipping the vote towards the Pirate Party. The subject of the cable reads "Wikileaks: The Pirate Party's White Horse Into Sweden's Parliament?"

On June 29, 2010 a US diplomat met with three members of the Pirate Party - which is described in the cable as a "mixture between communism and libertarianism," yet whose members are "well-salaried professionals, independent  from the party for income." Two of the "pirates," according to the report, were active in the "youth branch of the conservative party currently leading government."

The Embassy cable notes the "grim electoral outlook for Pirates" - as confirmed by a Pirate party member interviewed by the US diplomat, "Unless WikiLeaks Saves the Day."

Two weeks after the cable was sent, an arrest warrant was issued for WikiLeaks founder Julian Assange on sexual assault allegations - which was dropped, then re-issued, then revoked again by Swedish authorities in August 2015 when they dropped their case against him. 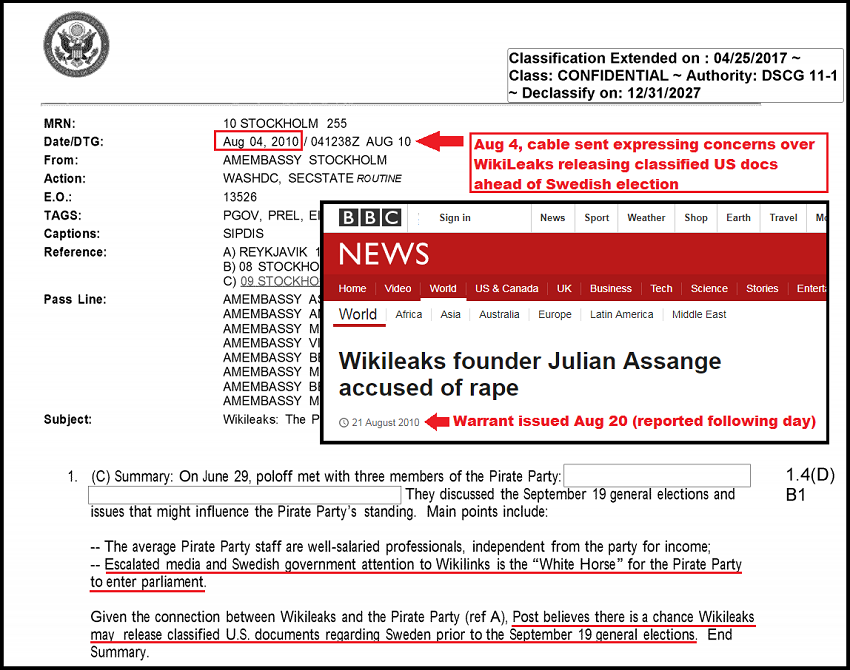 The emergence of this confidential document (found on Anthony Weiner's laptop and sent while his wife, Huma Abedin, was Secretary of State Hillary Clinton's Deputy Chief of Staff), is disturbing - as it potentially implicates the Obama administration in a conspiracy to silence Julian Assange while Hillary Clinton was Secretary of State - not to mention that it could be the smoking gun in yet another clear case of mishandled information found on imprisoned sexual deviant Anthony Weiner's laptop the FBI's Peter Strzok and crew must have somehow overlooked.

A brief timeline of events:

On August 20, 2010, the Swedish Prosecutor's Office issued an arrest warrant for Julian Assange over a rape allegation - two weeks after the US Embassy met with the Pirate party and had concerns over Assange leaking US secrets. The net day, Swedish cancelled the warrant.  "I don't think there is reason to suspect that he has committed rape," says one of Stockholm's chief prosecutors, Eva Finne. Swedish prosecutors did however continue to investigate a separate allegation of molestation, though they felt it was not a serious enough crime for an arrest warrant.

On November 18, 2010, Stockholm District Court approved a detention request for Mr. Assange, who had traveled to London. Two days later, Swedish police issued an international arrest warrant. On December 8, 2010, Assange is taken into British custody and taken to an extradition hearing. Eight days later, Assange posts bail and walks free in London until May 30, 2012 when the UK Supreme Court rules that he should be extradited to Sweden.

August 16, 2012, Assange begins his asylum at the Ecuadorian embassy in London - where he has remained for over five years.

In February, 2016, a UN panel found Assange to be detained unlawfully in the Ecuadorian embassy. 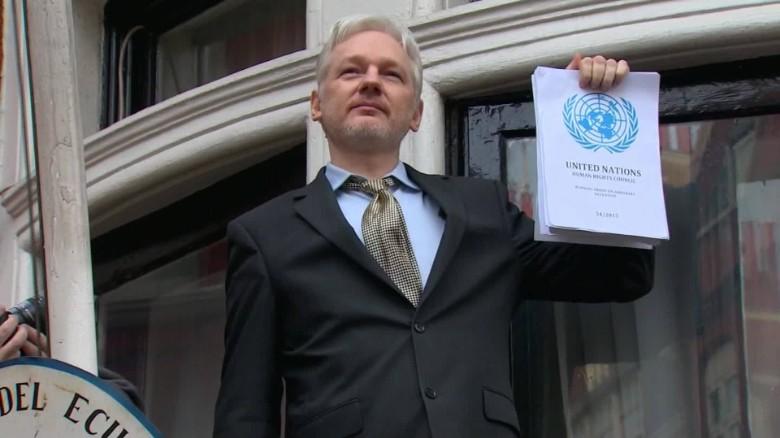 In May, 2017, Swedish authorities once again dropped their case against Julian Assange, with his Swedish lawyer Per Samuelsson told Swedish media "It is a total victory for Julian Assange," adding "He is free to leave the embassy whenever he wants."

Unfortunately, that's not going to be quite so easy for the time being - as Assange faces immediate arrest by the UK for skipping bail in his extradition hearing. Moreover, in April of this year, CNN and the Washington Post simultaneously reported that Attorney General Jeff Sessions' DOJ has prepared criminal charges against Assange over 2010 leaks of diplomatic cables and military documents.

While the DOJ seems intent on locking Assange up, the WikiLeaks founder has also received tremendous support from certain members of congress.

As we reported last week, Congressman Dana Rohrabacher travelled to London in August with journalist Charles Johnson for a meeting with Assange, where Rohrabacher said the WikiLeaks founder offered "firsthand" information proving that the Trump campaign did not collude with Russia, and which would refute the Russian hacking theory.

Rohrabacher brought that message back to Trump's Chief of Staff, John Kelly, to propose a deal. In exchange for a presidential pardon, Assange would share evidence that would refute the Russian hacking theory by proving they weren't the source of the emails, according to the WSJ.

However - when Trump was asked in late September about the Assange proposal, he responded that he'd "never heard" of it, causing Rohrabacher to unleash on John Kelly, who he blamed for blocking the proposal from reaching the President. Rohrabacher told the Daily Caller:

"I think the president's answer indicates that there is a wall around him that is being created by people who do not want to expose this fraud that there was collusion between our intelligence community and the leaders of the Democratic Party," Rohrabacher told The Daily Caller Tuesday in a phone interview.

"This would have to be a cooperative effort between his own staff and the leadership in the intelligence communities to try to prevent the president from making the decision as to whether or not he wants to take the steps necessary to expose this horrendous lie that was shoved down the American people's throats so incredibly earlier this year," Rohrabacher said.

Contributing to the notion of deep-state interference, CIA director Mike Pompeo referred to WikiLeaks as a "hostile intelligence service" in April, calling Julian Assange "a fraud, a coward hiding behind a screen" for exposing information about democratic governments rather than authoritarian regimes. This quite the ironic statement, considering Pompeo used leaked emails from WikiLeaks as proof "the fix was in" against President Trump.

So - while the Swedish authorities have dropped their case against Assange, and the UN says he's been unlawfully detailed - the UK insists on arresting Assange the moment he steps outside the Ecuadorian embassy for jumping bail on the dropped charges, and the US Department of Justice is reportedly prepared to slap criminal charges on Assange.

Perhaps the establishment is still a bit miffed that the "white wizard" showed the world what's really underneath the pantsuit, which despite the constant rhetoric of the past year is what ultimately cost Hillary - and so many of her charitable friends - the election.