Twelve people have been killed during the fourth night of "spontaneous" protests in Iran, according to state TV. The deaths follow reports that Iran's Revolutionary Guard vowed to "crush dissent" and take tough action if the unrest continued in what began as a protest against economic policies and seemed to immediately morph into a call for regime change - with demonstrators protesting against state security forces and calling for the ouster of Supreme Leader, Ayatollah Ali Khamenei.

The Daily Mail reported overnight that three people were shot dead by security forces who opened fire on protesters in Isfahan, while two individuals were run over in the town of Dorud by a stolen fire truck, and another two were shot overnight in the southwestern town of Izeh. "Armed protesters tried to take over some police stations and military bases but faced serious resistance from security forces,” state TV reported.

Video purportedly filmed in the city shows dozens of marchers on the streets as vehicles burn around them before what sounds like gunshots are heard.

The deaths in Izeh were confirmed by local politician Hedayatollah Khademi, who said it was unclear whether they were killed by police or other demonstrators.

'The governor said it (the gunfire) was unlikely to be by police as they were not supposed to open fire,' he said.

The shooting in Isfahan was reported by several prominent Twitter personalities including Amichai Stein, foreign affairs correspondent for the Israeli public broadcasting corporation, but could not be independently verified.

Meanwhile, protesters in the small northwestern town of Takestan set fire to government buildings and a Shia Muslim monastery, according to the ILNA news agency.The Mail also reports protests in the cities of Izeh (southwest), Kermanshah and Khorramabad (west), Shahinshahr (northwest) and Zanjan (north).

Protesters also marched towards the residence of Iran's Supreme Leader Ali Khamenei, while others burned pictures of him:

Protesters in Iran set fire to a poster of Khomeini (Former Supreme Religious Leader of #Iran and the leader of the Islamic Revolution in 1979)#IranProtests #تظاهرات_سراسرى #يحدث_الان_في_ايران #متحد_شویم #IranProtest pic.twitter.com/uSr04mx2JK

#BREAKING#Demonstrations_in_Iran spreading from #Mashhad to other cities, including #Kermanshah. People voicing political demands & opposing regime's foreign policies.
"Not Gaza, Not Lebanon, My life for Iran."#Iranprotests pic.twitter.com/nifAwq1bb5

Some demonstrators threw rocks at the revolutionary guard: 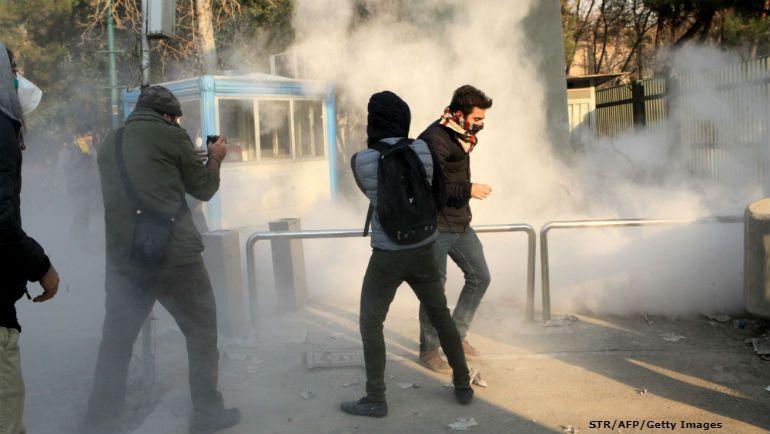 As we reported on Saturday, the US State Department has issued a formal condemnation of the Iranian government following two days of economic protests centering in a handful of cities, calling the regime "a rogue state whose chief exports are violence, bloodshed, and chaos" while announcing support for protesters. It fits a familiar script which seems to roll out when anyone protests for any reason in a country considered an enemy of the United States.

The next day, President Trump tweeted that the "Many reports of peaceful protests by Iranian citizens fed up with regime's corruption & its squandering of the nation's wealth to fund terrorism abroad. Iranian govt should respect their people's rights, including right to express themselves," adding "The world is watching!"

Many reports of peaceful protests by Iranian citizens fed up with regime’s corruption & its squandering of the nation’s wealth to fund terrorism abroad. Iranian govt should respect their people’s rights, including right to express themselves. The world is watching! #IranProtests

And Mike Pence, of course, stands with Trump in supporting "peaceful protesters in Iran who are speaking out for freedom," adding "we condemn the arrests of innocents," and "The time has come for the regime in Tehran to end terrorist activities, corruption & their disregard for human rights."

.@POTUS & I stand w/ peaceful protestors in Iran who are speaking out for freedom & we condemn the arrests of innocents. The time has come for the regime in Tehran to end terrorist activities, corruption, & their disregard for human rights. #IranProtests https://t.co/PcZMk07RcB

Yesterday, President Trump tweeted "Big protests in Iran. The people are finally getting wise as to how their money and wealth is being stolen and squandered on terrorism. The USA is watching very closely for human rights violations!"

Big protests in Iran. The people are finally getting wise as to how their money and wealth is being stolen and squandered on terrorism. Looks like they will not take it any longer. The USA is watching very closely for human rights violations!

In a later tweet, Trump accused Iran of 'numerous violations of human rights,' and commented on the disruption to social media, saying it 'has now closed down the Internet so that peaceful demonstrators cannot communicate. Not good! As The Daily Mail reports, Iranian President Rouhani dismissed Trump's comments.

'This man who today in America wants to sympathise with our people has forgotten that a few months ago he called the nation of Iran terrorist.

'This person whose whole being is against the nation of Iran has no right to feel pity for the people of Iran.'

Somewhat interesting are the specific mentions of "corruption" and "human rights violations" in light of the Executive Order Trump issued the week before those tweets which allows for the freezing of US-housed assets of foreign individuals or entities deemed "serious human rights abusers," along with government officials and executives of foreign corporations (current or former) found to have engaged in corruption - which includes the misappropriation of state assets, the expropriation of private assets for personal gain, and corruption related to government contracts or the extraction of natural resources. 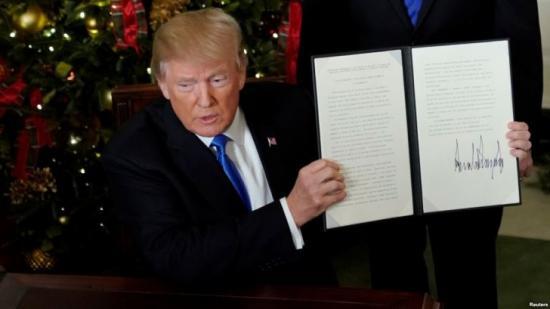 Of note, anyone in the United States who aids or participates in said corruption or human rights abuses by foreign parties is subject to frozen assets - along with any U.S. corporation who employs foreigners deemed to have engaged in corruption on behalf of the company.

Might there be (or have been) a corresponding freezing of the assets belonging to Iran-linked individuals or entities in the United States on the horizon?

Have any D.C. lobbyists done work on behalf of Iranian interests which may be deemed corrupt?

Meanwhile, twitter user Strategic Sentinel has posted an unverified flight map of what appear to be a "large amount of aircraft leaving Iran at the moment, many with no callsign, origin, or destination" adding "Exodus in progress?"

Large amount of aircraft leaving Iran at the moment, many with no callsign, origin, or destination. Exodus in progress? pic.twitter.com/Ef33nTxGGI

This is in addition to two flights which are Iranian in origin with no callsign inside Iran: one from Iran Airtours and one from Iran Aseman Airlines. Both of these planes also have no callsign, no destination, and no origin, but are clearly landing in #Tehran .@AircraftSpots pic.twitter.com/QvCr4Q4MT9

UPDATE: Still some aircraft with no callsign, but not as many as before. Some have disappeared, while the remaining aircraft have dispersed across Iran. Very few aircraft landing or departing at either IKA (Tehran Imam Khomeini Intl) or THR (Tehran Mehrabad Intl). pic.twitter.com/SEafVmgPWJ

It's surprising how these "peaceful" regime change protests keep getting out of hand, although - connected to that - it's a change to see Adam Schiff agree with President Trump and Mike Pence on something.

Watching events in Iran with great concern over violence against and arrest of peaceful protestors. We stand with the people in Iran and their right to peacefully assemble, petition their government and choose their leaders in a democratic process free from fraud and interference