Private prisons across the United States are set to reap the financial benefits of changes in the tax code signed by President Donald Trump. Under the new tax law, investments in REITs will see a 25% reduction in tax, from 39.6% down to 29.6%.

Jamie Trinkle, campaign and research coordinator with the racial and economic justice coalition Enlace said, “it’s going to be great for the investors, banks and hedge funds that own shares in private prisons, and are dependent on increased incarceration and criminalization.”

As a result, investors are focused on a catalyst that would trigger the next wave of incarcerations, such as Trump’s promise to greatly expand the U.S. Immigration and Customs Enforcement (ICE).

In this context, it’s not too often that a former medium-security prison comes up for sale on Craigslist. The facility is located in Brush, Colorado with an asking price of $1,200,000 or 88 bitcoins @ 13,650.23. Yes, you heard that correctly, as of December 2017, the listing broker on the property now accepts bitcoin. 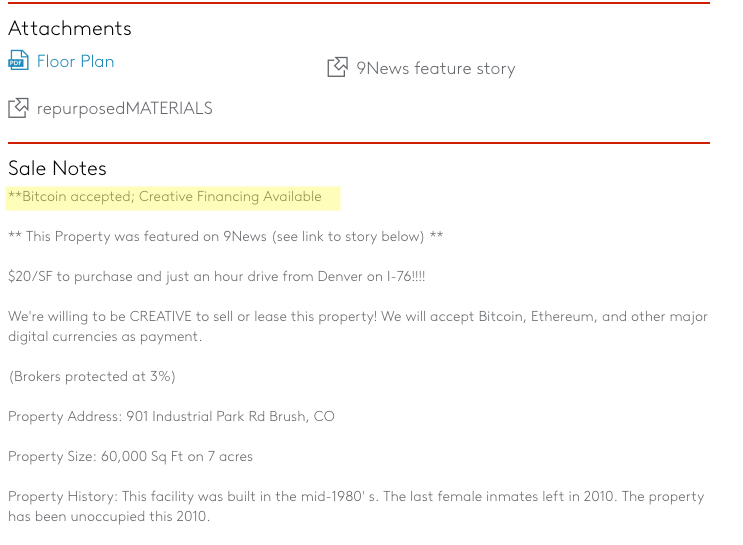 The 60,000-square-foot former prison resides at 901 Industrial Park Road and sits on 7 acres of prime commercial real estate. The structure was built in the mid-1980’s, which last housed female inmates in 2010, but has been dormant ever since.

The Craigslist ad highlights the benefits of owning a private prison:

So while Trump’s tax law changes could spark new interest among investors to reopen the prison in hopes for a government contract, there is a distinct chance that a newly minted Bitcoin millionaire could stumble across this property and find the current infrastructure appealing for one of two things: a bitcoin mining facility or a marijuana growing operation, or perhaps both.