A "Bomb Cyclone" Is Set To Detonate Off The East Coast

“This storm developing off the Southeast coast will meet the meteorological criteria of a “bomb” as it rapidly intensifies. The signal for a storm has been evident since last week, but as the track has been fine-tuned, impacts to the I-95 corridor are now expected. Snow, strong winds, and very cold temperatures are expected particularly the further east one heads,” said Ed Vallee, meteorologist at Vallee Weather Consulting LLC. 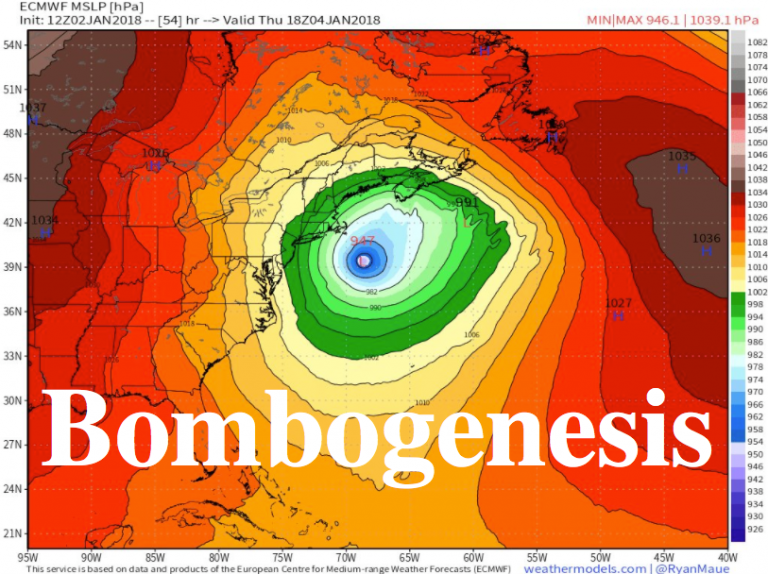 Winter Storm Grayson, a very large and powerful winter storm is threatening the East Coast of the United States with heavy snow, intense winds, and record-setting low temperatures. Winter storm watches and warnings have been issued for many coastal regions in north Florida to Maine from Wednesday into late Thursday.

This week's storm may end up being worse than your average nor’easter, according to Bloomberg. It could produce a “bomb cyclone,” otherwise known as a bombogenesis, a phenomenon that occurs when a system’s central pressure drops steeply - 24 millibars or more - in 24 hours. If current computer models hold, that’ll start to happen somewhere off Cape Hatteras, North Carolina, and continue as the storm moves north. Hurricane-force wind warnings have been posted off the coast where ships could encounter winds of 80 miles (130 kilometers) an hour and waves as high as 26 feet on Thursday.

“The real apex, the peak of the storm, will be Cape Cod to Nova Scotia,” said Gregg Gallina, a forecaster at the U.S. Weather Prediction Center in College Park, Maryland. 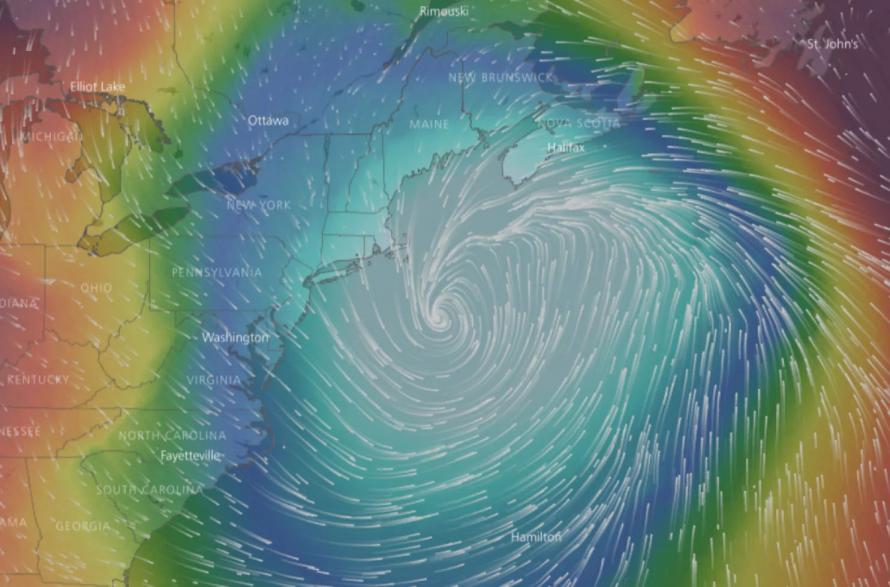 Pressure and wind visualization of storm off the coast of New England on Thursday.

This particular storm, which is currently developing off the coast of Florida, will devour enough warm water that it could be considered a winter hurricane by the time it leaves the Mid-Atlantic coast late Wednesday.

All day Thursday meteorologists are going to be glued to the new GOES-East satellite watching a truly amazing extratopical "bomb" cyclone off New England coast. It will be massive -- fill up entire Western Atlantic off U.S. East Coast. Pressure as low as Sandy & hurricane winds pic.twitter.com/6M4S3y75wT

The Weather Channel describes how a bombogenesis forms:

To be classified as a weather bomb, or having undergone bombogenesis or “bombing-out”, the central pressure of a low pressure system must drop at least 24 millibars within 24 hours.

Bombogenesis results when there is a large temperature gradient, usually between a cold continental air mass and warm sea-surface temperatures. However, it can also be the product of a cold polar air mass and much warmer air from the south, say, over the Plains states.

Over that temperature contrast, a powerful, intensifying jet-stream disturbance triggers air to rise and kicking off the bombogenesis process.

Frequently, Nor’easters are weather bombs due to cold air surging southward from Canada combined with the warm ocean waters of the Gulf Stream.

“Some computer models are projecting a minimum central air pressure of below 950 millibars at its peak, which would be nearly unheard of for this part of the world outside of a hurricane,” said Mashable’s Andrew Freedman. “For comparison, Hurricane Sandy had a minimum central pressure of about 946 millibars when it made its left hook into New Jersey in 2012.” By Thursday, the European model forecasts the storm to register at 946 millibars off the coast of Long Island, making it a rather intense storm on par with destructive hurricanes.

With the cold air in place ahead of the storm, winter storm watches and warnings have been issued from north Florida to Maine.

On its current track, the storm will scrape the East Coast and dump snow from South Carolina to Maine and into Canada, with Boston and parts of Maine bearing the brunt. Georgia Governor Nathan Deal has already declared a state of emergency for 28 counties. The weather stands to wreak havoc on markets for longer, as electricity prices have already surged to the highest level in years and natural gas demand hit a record high. 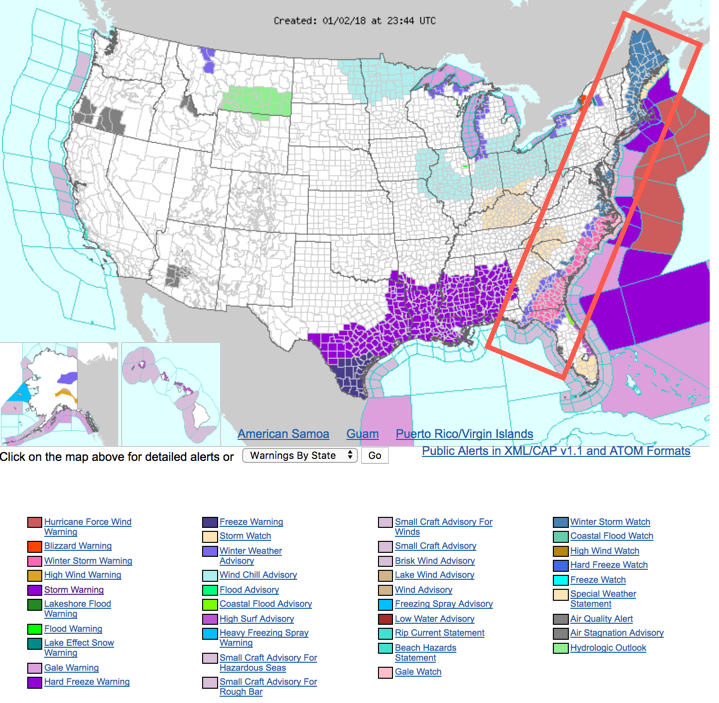 The responsible storm is forecast to begin taking shape off the coast of Florida Wednesday, unloading hazardous snow and ice in highly unusual locations not accustomed to such weather. The National Weather Service has already posted winter storm watches from Lake City, Fla. to Norfolk

It is then expected to rapidly intensify, buffeting the Mid-Atlantic beaches and eastern New England, where winter storm watches have also been issued.

In Charleston, one to three inches of snow and sleet is forecast Wednesday, where the Weather Service warns to “plan on difficult travel conditions.” From Norfolk to the Maryland and Delaware beaches, including much of the southern half of the Delmarva Peninsula, 3 to 6 inches of heavy snow are predicted from Wednesday evening to Thursday afternoon.

Farther inland in the Mid-Atlantic, near Interstate 95, the storm’s exact track will be highly consequential. Current computer models suggest most, if not all, snowfall will occur east of Washington and Baltimore on Wednesday night into early Thursday. But small shifts to the west could bring some snow to these cities.

To the north, Philadelphia and New York have a better chance for a coating of snow, but — unless the storm edges closer to the coast — the more significant snow should remain to their east from Atlantic City to eastern Long Island, where at least four to six inches could fall late Wednesday to late Thursday.

By the time the storm reaches the ocean waters east of Long Island and eastern New England on Thursday, it will be explosively intensifying. The storm’s central pressure will have fallen 55 millibars in just 24 hours — an astonishing rate of intensification.

In Boston, the Weather Service is predicting not only four to seven inches of snow but also winds strong enough to bring down branches. Throughout eastern Massachusetts and eastern Maine, the combination of wind and snow could create blizzard conditions, especially if the storm wobbles west.

There’s a silver lining: The storm will offer some respite from the bone-rattling cold that triggered wind chill advisories and freeze warnings across the central U.S. and winter storm watches from Massachusetts to Florida on Tuesday.

But the relief will only be temporary as the Arctic chill is set to make a comeback by the end of the week. Temperatures will rise out of the teens and single digits from Philadelphia to Boston before slipping back again by Friday and Saturday. 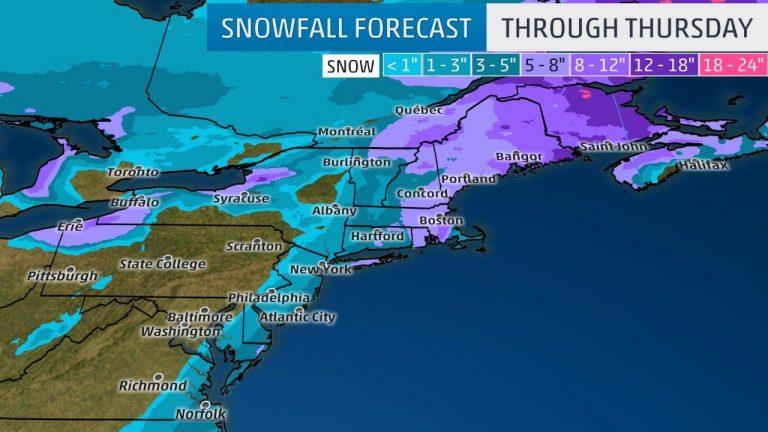 According to a StormHamster.com meteorologist tracking the trajectory the storm, here are the two scenarios:

As a result there is going to be a QPF drop out from around Virginia up towards Connecticut. Of course if we shift further west then we shift everything west but there will still be a dropout in that NW corner if you will. Be it DE/NJ/NYC or be it E-MD/E-PA/SE NY. Regardless of precise location of this storm and it’s heavier precipitation contours there has to be a drop out in north and west sections. 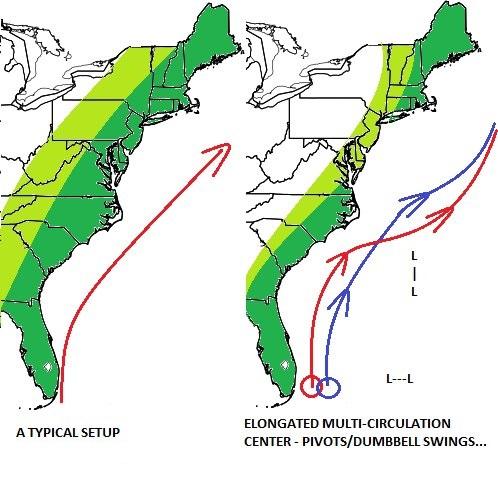 This system will become a hurricane force low. It is why you really do not want to see it come west like it has over time. I always felt the chance existed and now unfortunately not only here we are but with the potential to even pull it further west in time. These winds will cause widespread power outages. It has also been a no brainer that Nova Scotia was going to get absolutely smacked by this storm and they are in for it with this one no matter what we get precisely along the eastern US coastline. Unavoidable heavy hit for them. 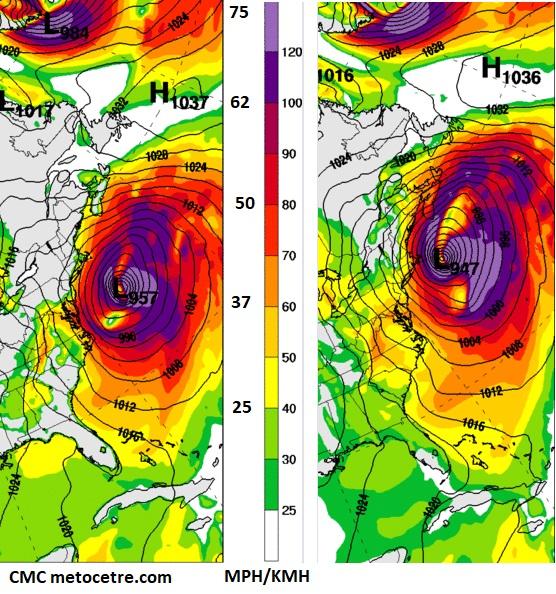 What happens next could be devastating for the East Coast: "The whole troposphere is coming south and we will not avoid an intense cold snap lasting several days," said StormHamster.com. 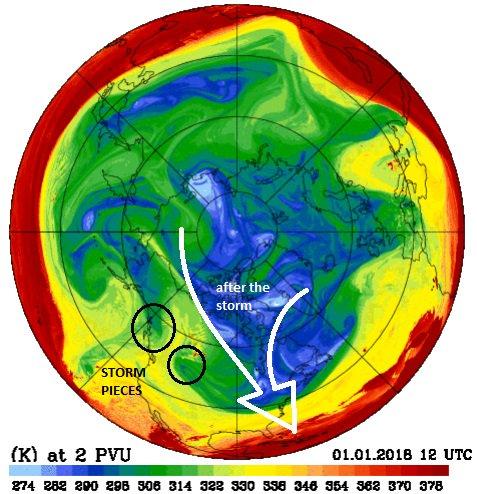 With the potential for power outages and extremely cold weather continuing in the on the East Coast through the weekend. This could be a storm to remember… 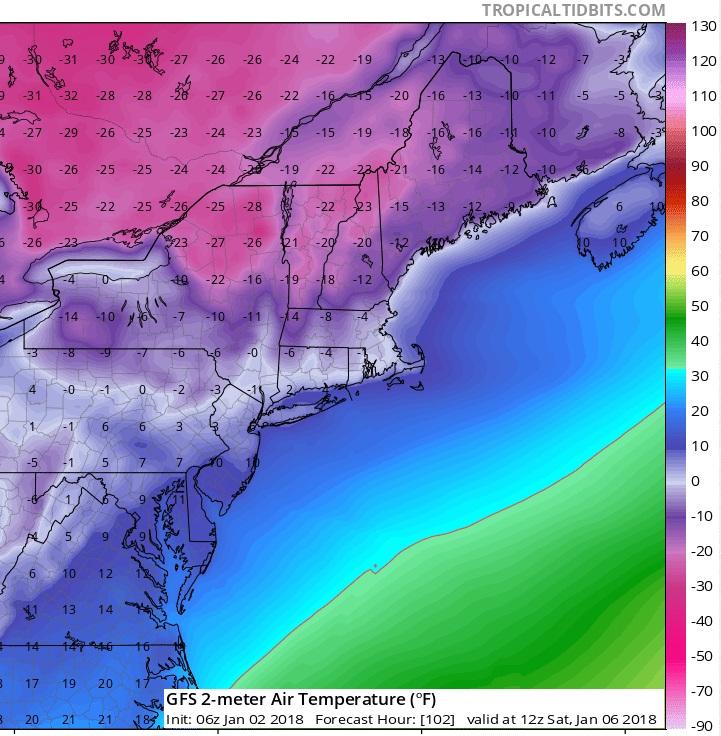 Finally, while neither Kim nor Trump has the red button to unleash this particular "bomb", this is what the "bomb cyclone" will look like at is explodes over the East Coast in the coming days. 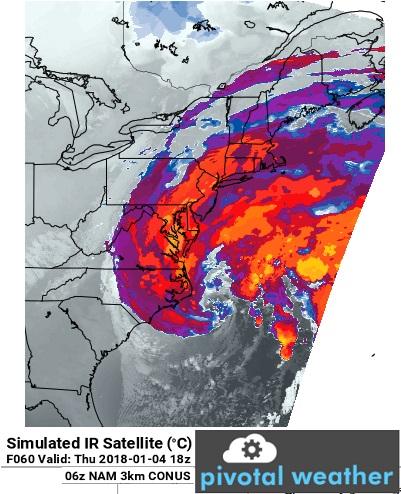 “This is only the appetizer - the main meal comes over the weekend,” said Judah Cohen, director of seasonal forecasting for Atmospheric and Environmental Research, a Verisk Analytics Inc. business in Lexington, Massachusetts. “This is about as intense a cold as I can remember.”

Meanwhile, meteorologist Paul Walker at AccuWeather said that the storm will probably cause blizzard conditions in New England and eastern Long Island as high winds accompany the snow. And then it gets worse again: Another round of bitterly cold air is forecast to blast across the U.S. by the middle of next week. The chill could linger through Jan. 16.