Key Events This Week As We Kick Off The New Year

We kick off the new year with a busy week on the data front.

The main focus this holiday-shortened week will be on the employment report, the FOMC meeting minutes and the manufacturing ISM.

First, nonfarm payrolls likely expanded by 185k in December, implying a modest deceleration from an increase of 228k in November. The economy seems to have ended the year with good momentum: consumer demand appears to have been strong during the holiday season and there are signs that capex is steadily picking up. These developments should support our call for solid hiring activity in December. As a result, the unemployment rate is expected to hold steady at 4.1%. Due to the low level of the unemployment rate and further job gains, consensus expects wage growth to accelerate to 0.3% mom, leaving the yoy rate unchanged at 2.5%.

Second, Wednesday's release of the FOMC minutes will likely reflect increased confidence about short-term, but not necessarily long-term, growth prospects. The minutes will reveal a debate about the ability of tax cuts to stimulate investment and productivity growth, which can alter the potential growth rate of the economy. Also likely is a discussion of the relevance of unemployment slack in determining the trend in inflation.

Third, the manufacturing ISM is expected to post another solid reading but with little acceleration. This is supported by the ISM-adjusted Empire State and Philadelphia Fed measures, which remained strong but were relatively flat. Note, however, that the Chicago PMI was extremely elevated. 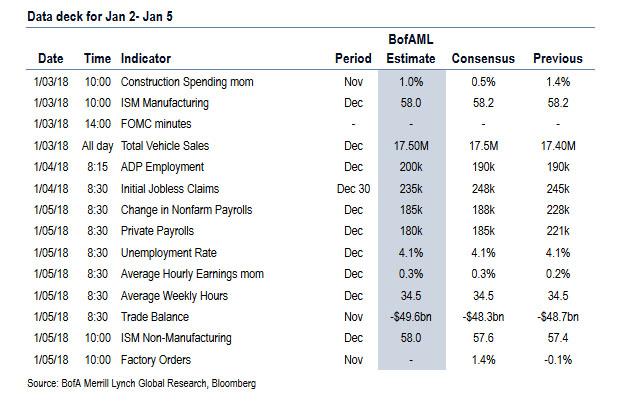 Looking at the week ahead for global events, we start the year with the final reading of the December manufacturing PMI for the Eurozone, Germany, France and US, as well as the flash readings for the UK and Italy.

Finally, here is Goldman's preview of the weekly events focusing on the US alone, in which the key economic releases next week are ISM manufacturing on Wednesday and the employment report on Friday. There are several scheduled speaking engagements by Fed officials this week. Additionally, the minutes from the December FOMC meeting will be released on Wednesday.