"Everything Is Overvalued": Public Pensions Face Dangerous Dilemma In 2018

As  we discussed  a few weeks ago, being a pension investor these days has absolutely nothing to do with "investing" in the traditional sense of the word and everything to do with gaming discount rates to make their insolvent ponzi schemes look more stable than they actually are.  Here was our recent take on CalPERS' decision to hike their equity allocation to 50%:

CalPERS' decision to hike their equity allocation had absolutely nothing to do with their opinion of relative value between assets classes and nothing to do with traditional valuation metrics that a rational investor might like to see before buying a stake in a business but rather had everything to do with gaming pension accounting rules to make their insolvent fund look a bit better.  You see, making the rational decision to lower their exposure to the massive equity bubble could have resulted in CalPERS having to also lower their discount rate for future liabilities...a move which would require more contributions from cities, towns, school districts, etc. and could bring the whole ponzi crashing down.

The new allocation, which goes into effect July 1, 2018, supports CalPERS' 7% annualized assumed rate of return. The investment committee was considering four options, including one that lowered the rate of return to 6.5% by slashing equity exposure and another that increased it to 7.25% by increasing the exposure to almost 60% of the portfolio.

The lower the rate of rate means more contributions from cities, towns and school districts to CalPERS. Those governmental units are already facing large contribution increases — and have complained loudly at CalPERS meetings — because a decision by the $345.1 billion pension fund's board in December 2016 to lower the rate of return over three years to 7% from 7.5% by July, 1, 2019.

Overnight the Wall Street Journal poses an interesting question: what happens when real world fundamentals don't line up with pension boards' artificial goal seeking exercises on discount rates?  The answer, of course, is that pensions, and therefore taxpayers, are forced to take on more and more risk as they stretch for returns...

Retirement systems that manage money for firefighters, police officers, teachers and other public workers aren’t pulling back on costly bets at a time when markets are rising around the world.

Some public pension funds are adding to traditional allocations of stocks and bonds while both are expensive.

Others are loading up on more private-equity or real-estate holdings that are less liquid and sometimes carry high fees.

...a phenomenon that has resulted in a massive reduction of safer bets on bonds as pensions have been forced to chase returns via investments in expensive private equity and real estate allocations.

Indeed, as one of the people interviewed by the WSJ puts it best, how much risk to take is a question facing all investors as they enter 2018. And the punchline" "Everything is overvalued," said Wilshire Consulting President Andrew Junkin, who advises public pension funds. "There’s no magic option out there." 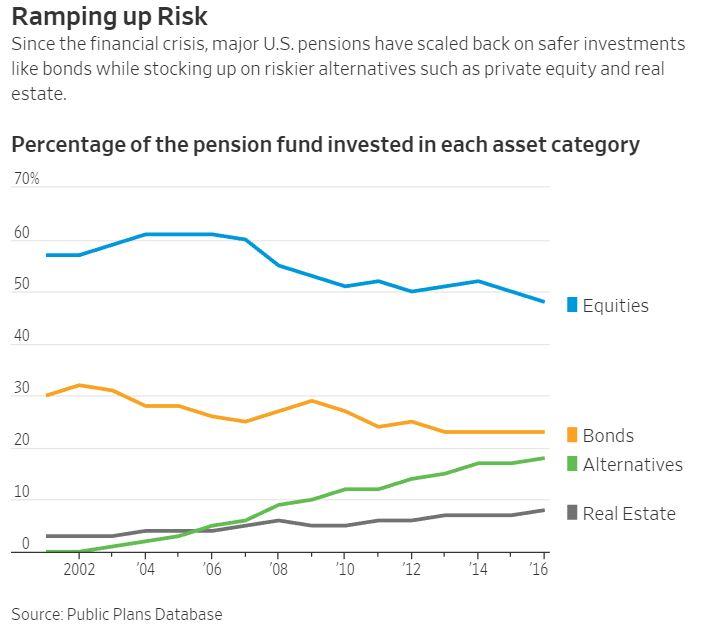 As our readers are aware, this is hardly a new topic for us. As we pointed out a year ago in a post entitled "CalPERS Board Votes To Maintain Ponzi Scheme With Only 50bps Reduction Of Discount Rate," each year CalPERS has to weigh mathematical realities against the risk of disrupting the ponzi scheme and forcing several California cities to the brink of bankruptcy with lower discount rates...'mathematical realities' rarely win that fight.

But a CalPERS return reduction would just move the burden to other government units. Groups representing municipal governments in California warn that some cities could be forced to make layoffs and major cuts in city services as well as face the risk of bankruptcy if they have to absorb the decline through higher contributions to CalPERS.

“This is big for us,” Dane Hutchings, a lobbyist with the League of California Cities, said in an interview. “We've got cities out there with half their general fund obligated to pension liabilities. How do you run a city with half a budget?”

CalPERS documents show that some governmental units could see their contributions more than double if the rate of return was lowered to 6%. Mr. Hutchings said bankruptcies might occur if cities had a major hike without it being phased in over a period of years. CalPERS' annual report in September on funding levels and risks also warned of potential bankruptcies by governmental units if the rate of return was decreased.

Of course, the pension managers - unless they happen to be traders in the early 20s who have never encountered an even modest bear market or market correction - are quite aware of the underlying tension of allocating cash to stocks at all time highs:

Increasing its allocation to stocks is also risky. “This may not be the most opportune time to take on additional equity risk,” investment manager Dianne Sandoval said at a December board meeting.

Why whatever could she be referring to: the $18 trillion in central bank liquidity which this year will finally shrink for the first time ever, or the ominous up/downside equity investment calculus going forward.

Meanwhile, this is not just a U.S. phenomenon as the WSJ notes that a major Canadian pension fund is also planning a bigger bet on illiquid assets. The $202 billion Canadian pension fund Caisse de dépôt et placement du Québec plans to move money into investments such as real estate, private equity, infrastructure and corporate credit, said President and Chief Executive Officer Michael Sabia, of CDPQ. “Today, liquid assets—traditional government bonds and public equities—account for the majority of our investments,” Mr. Sabia said in a statement. “A few years down the road, this will no longer be the case.”

Of course, when going all-in on the various asset bubbles around the world inevitably fails, taxpayers, as always, will be forced to pick up the pieces: the question is whether or not the public pension ponzi will be too big to bail.