US Manufacturing PMI Jumps To Highest Since March 2015

Following strong European PMI data this morning, Markit reports US Manufacturing's final December PMI at a better than expected 55.1 - the highest since March 2015.

Manufacturing is notably diverging from the slump in Services - which is at its lowest since September 2016... 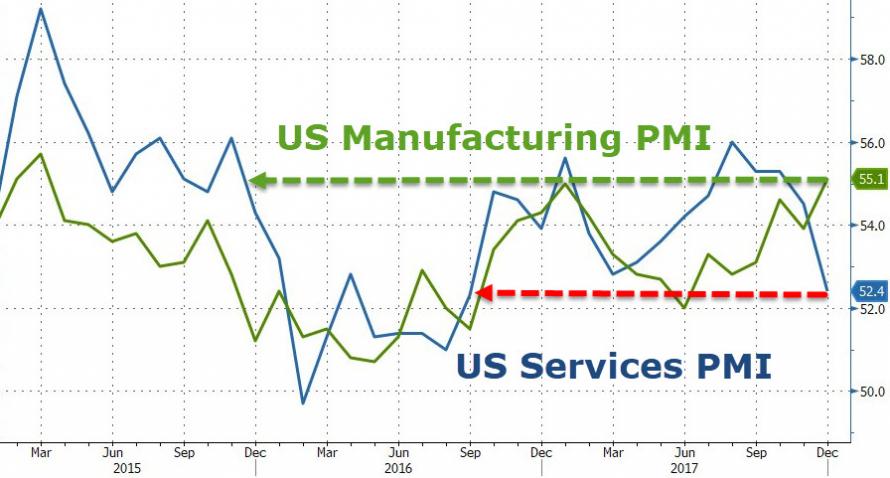 Furthermore, the rate of job creation is at its fastest since September 2014... 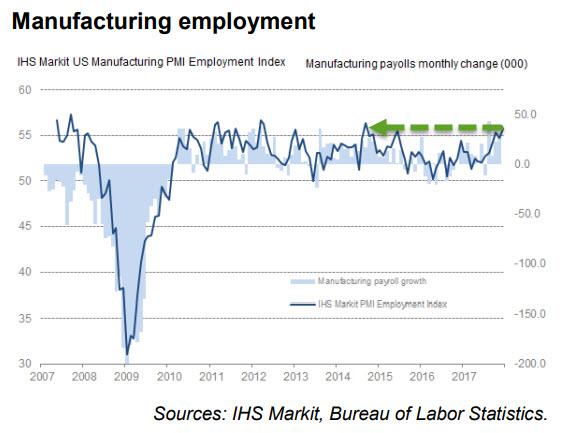 New business received by manufacturers continued to rise in December, with the rate of expansion accelerating to a ten-month high. Anecdotal evidence linked increases to greater demand from new and existing clients. Exports sales, however, grew at a marginal pace.

“US manufacturers ended 2017 on a high. Output growth accelerated to its fastest since the start of the year on the back of a marked upswing in demand as the year came to a close.

“Prospects for the upturn also look good. With business optimism about the year ahead running at its highest for two years in the closing months of 2017, companies are clearly expecting to be busier in 2018.

“The upbeat mood is underscored by an increased appetite to hire new staff, with the survey indicating that factory payroll numbers are rising at a rate not seen for over three years.

“Indicators of backlogs of work and input buying likewise suggest production will continue to grow at a solid pace as we move into 2018. However, the strengthening of demand for raw materials has led to supply chain delays, which have in turn been increasingly linked to higher prices as a sellers’ market develops. Input price inflation accelerated to one of the highest rates seen over the past five years in December, as suppliers hiked prices for a wide range of inputs.

“The combination of strengthening growth, a solid labour market and rising prices will add to expectations that the Fed will remain on track for another rate hike in the near future, with March looking a likely possibility.”