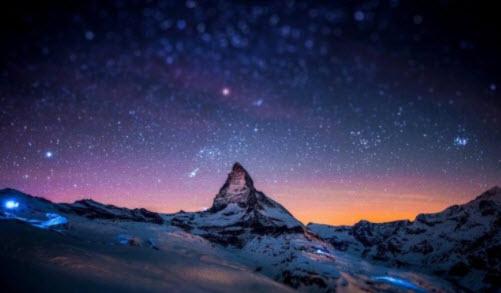 To see a world in a grain of sand
And to see heaven in a wild flower,
Hold infinity in the palm of your hand,
And eternity in an hour.

A robin redbreast in a cage
Puts all heaven in a rage.

A dove-house fill’d with doves and pigeons
Shudders hell thro’ all its regions.
A dog starv’d at his master’s gate
Predicts the ruin of the state.

A horse misused upon the road
Calls to heaven for human blood.
Each outcry of the hunted hare
A fibre from the brain does tear.

Over the course of 2017, I spent a lot of time detailing where we stand as a species and where I think we’re going. To summarize, I think the positive impact of the internet and social media on humanity is still very much in its infancy. The more connected we become to one another across the planet, the more we’ll realize we have far more in common with one another than we do with the sociopathic oligarchs and politicians in charge of our respective nation-states.

Much of the 20th century was defined by unimaginable human conflict and terror, unleashed upon the public by crazed elites and rulers who were able to successfully manipulate large populations. The key to preventing a repeat of this sort of thing in the 21st century is billions of human beings across the planet communicating and sharing friendship with one another to the point we can no longer be tricked in killing each other. We need to learn to see “the other” in ourselves and voluntarily collaborate with our fellow humans on the challenges that face us in order to bring our species to the next level. This isn’t just a pipe-dream or insane utopian ramblings, I think it’s entirely possible.

That said, the road could be long and some real disasters may lie ahead before we finally get our footing as a species. As far as I see it, there are several factors still preventing us from getting from point A to B. For one thing, leaders of nation-states throughout the world are almost always some of the worst individuals society has to offer. The types of people who aspire to, and generally attain political power, tend to be the most unconscious, power hungry, sociopathic characters around. That’s just how this stuff works.

It’s in the best interests of these leaders to convince their citizens that other human beings living in rival gangster nation-states are the enemy. Pretty much all nation-states are run as organized crime syndicates, the only question is a matter of degree. As such, the goal of political leaders is more often than not to propagandize “the people” into thinking that they are somehow special, the chosen ones, etc. When this sort of propaganda is successful, it provides the pretext for all kinds of barbaric horrors against other humans who are, naturally, less special or righteous than they are.

Humans will never break the destructive cycle of murder and authoritarianism until we recognize that we are all connected. The key to achieving this sort of understanding on a planet-wide level is for us to become resilient against government/corporate propaganda, which happens when we talk to one another. Working with one another is even better.

This is one of the primary reasons Bitcoin so captured my imagination beyond simply its promise of decentralized money and a displacement of the current financial system. What I’ve seen evolve in Bitcoin over the past several years is a truly global community of like-minded people. Individuals from all over the world who have crossed language and cultural barriers to voluntarily work and support a project they passionately believe in. It transcends nation-state boundaries, politicians and central banks. It shows what’s possible when people come together and voluntarily collaborate on something. It shows us that we can be so much more as a species than what we are today.

It’s not a coincidence that Bitcoin and crypto assets have taken the world by storm at this particular moment. When the financial system died in 2008/09 and corrupt politicians the world over decided to save the crooks and leave everyone else hanging, something clicked. A lightbulb went off and we recognized that the old way of doing things is corrupt, archaic and unacceptable. While the entrenched interests remain in power, the hearts and minds of the public were lost, never to be regained. It’s because of this incredibly shady and crooked era in government policy that we now have this incredible opportunity for paradigm level change at our fingertips. When given lemons…well you know.

The reason the next several years are going to be so fascinating and chaotic is precisely because nothing was solved by the response to the financial crisis. The only thing politicians achieved was keeping a terminal and corrupt financial system afloat while bailing out the oligarchs who wrecked the planet. This Potemkin Village financial system remains propped up, but it has zero chance of long-term survival. It will be entirely replaced by something else and we have the opportunity to determine what that will be. We need to do this now, and on own our terms, so that oligarchs and their political henchmen can’t dictate it to us later. That’s precisely what I see happening in the crypto asset space, and why I’m so optimistic about its impact on human affairs.

It’s not just the financial system though. Total and unequivocal government support of this crooked financial infrastructure led to a severe loss in government credibility as well. This opens up governments across the world to the same forces of decentralization that are currently working their magic upon money. Everyone knows that politicians everywhere are self-serving, corrupt and dangerous. Increasingly, we will ask why we need them at all. If we don’t need central banks, why do we need politicians? If we don’t need politicians, what do we need? How can we govern ourselves more ethically and transparently going forward? In the case of the U.S., why is decision making for over 300 million people centralized in a place called Washington D.C., which everyone admits is a sleazy swamp. Is this really the best we can do?

When I think about 2018 and beyond, I see a species in the early stages of a historic transformation. We are moving away from hierarchies and into networks. Away from centralization and into decentralization. From the unconscious to the conscious.

That said, the old system isn’t gone just yet. It remains a dangerous zombie, and its benefactors will fight to keep their schemes alive. The years ahead will be characterized by increased tension between the old and the new. What comes next is up to us.

Never forget that we are all connected. That you have tremendous power to impact the world based on your everyday thoughts and actions. Understand that we don’t have to live this way. Fill your heart with love, not hate. Stay true to your higher nature. If enough of us do this, the future is unimaginably bright.