Will 2018 Be The Year That Interest Rate Hikes Crush Auto Sales?

We've long argued that elevated auto sales in the U.S. are nothing more than yet another debt bubble resulting from perpetually low interest rates and a gradual loosening of underwriting standards, primarily coming in the form of longer loan maturities.  Now, as Bloomberg  points out today, more and more wall street analysts are suddenly starting to question whether 2018 might be the year that interest rate hikes from the Fed finally crush auto sales.

As the Chief Economist of Cox Automotive notes, "monthly payments matter"...and with each 25bps hike from the fed resulting in $8-$20 worth of higher monthly payments one can quickly understand why the notion of three rate hikes in 2018 might start worry auto OEMs...

“Consumers could face slightly higher costs for all their borrowing: credit-card balances, student loans, financing a house or a car,” said Charlie Chesbrough, senior economist at Cox Automotive, which owns websites including Kelley Blue Book and Autotrader. “At the same time, higher rates drive up the cost to provide low-rate financing, which eats into profit margins and hurts the carmakers as well.”

“The monthly payment matters,” said Jonathan Smoke, Cox’s chief economist. “When rates rise, many consumers do not have an option to pay more. We believe higher rates have already led the automotive market to see some shift” toward used-vehicle purchases instead of new ones.

A quarter-point increase in interest rates typically adds $8 to $20 to the monthly payment on a new vehicle, according to Ivan Drury, senior analyst with car-shopping website Edmunds. Throw a handful of those at a consumer this year and the higher payments could lead shoppers to give up options like heated seats and satellite radio, or move down in vehicle size, pinching automaker profits.

...and wall street analysts who are forecasting a painful year for the Big 3. 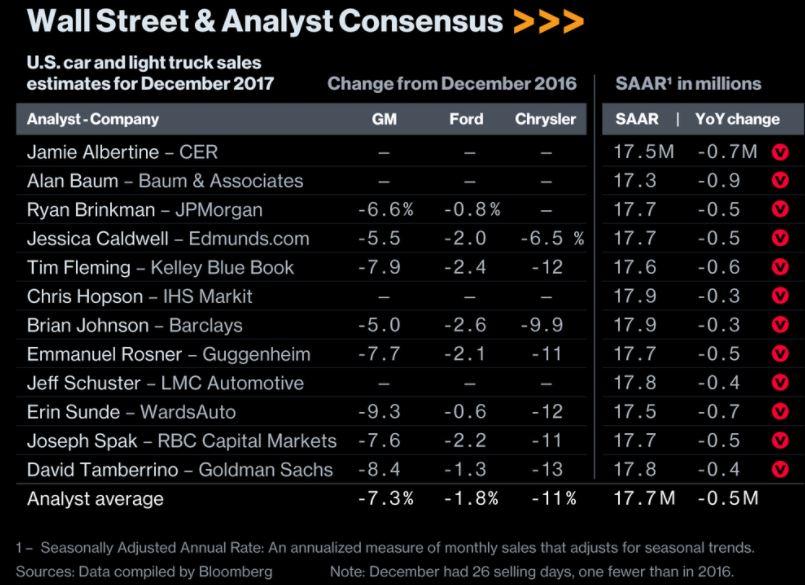 Of course, the much bigger concern for the auto market should be whether years of artificial excess demand will result in off-lease vehicles flooding the used car market with so much supply that used car prices collapse and trigger new sales to revert back to a true "normalized" level based on replacement rates.

That then begs the question of what exactly is a 'normalized' auto SAAR for the US market?

Well, as it turns out there are roughly 265mm light vehicles registered in the U.S. today compared to only 255mm driving age people, or just over 1 car per driver...which seems somewhat reasonable.

Now, putting aside population growth and other metrics for a moment, if only 13 million cars are getting scrapped each year, that implies a 20-year average useful life and a 'normalized' annual SAAR of 13 million...not that complicated but somewhat inconvenient for the auto OEMs.

The problem is that the useful life of cars has actually improved dramatically over the past 20 years which only makes the 'normalized' number even worse.  Per data from the Bureau of Transportation, the average age of vehicles has increased at a CAGR of 1.6% per year over the past two decades...more than enough to offset population growth.

Just to illustrate why that is a problem, the following table shows the implied U.S. auto SAAR based on varying useful life assumptions....each 1 year expansion in a vehicle's useful life cuts about 1mm out of "normalized" demand.

Said another way, in order to maintain the 18mm annual selling rate of vehicles that the US obtained in 2016, each driving age person would have to own 1.4 vehicles.  Now, while we fully understand there are a minority of 'super users' of almost any product, we're pretty sure the average driver only needs 1 car at a time.

So the real question is not whether rising interest rates will have a negative impact on auto SAAR in 2018 but rather if such a temporary blip will be the catalyst that finally triggers a return to normalized auto demand in the U.S.