The European Union Must Think Local To Address Global Challenges

Authored by Daniel Lacalle via The Mises Institute,

The recent elections in the Eurozone have shown that the risks to the European project remain. 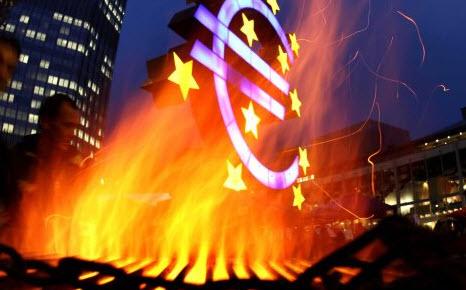 In Germany, an insufficient victory from Merkel, the collapse of the social democrats and the rise of the alternative right and extreme left have surprised many.

However, it was predictable. The relief rally in the Euro versus its trading currencies and the bullish tone of equity and bond markets after the French elections and the victory of Macron were, in many ways, based on a very optimistic view of strengthening of the current European model. Markets quickly forgot that almost 40% of the voters in France decided to support radical anti-EU parties at both sides of the political spectrum. The German elections showed that this bullish perception was a mirage. In Germany, almost 30% of the vote went to radicals.

The European Union is ignoring this trend and soldiering on with what Brussels calls “more Europe”, which often means more interventionism and central planning. And citizens are not happy with this. Instead of seeing Brexit as a warning sign and an opportunity to improve the European Union strengthening freedom, openness and diversity, the separation of the UK has been taken as an opportunity to advance in an incorrect model that mirrors the French “dirigisme”, a central-planned, heavily intervened model.

The European Commission published in September a surprisingly euphoric docu- ment declaring the end of the crisis thanks to “the decisive action of the European Union”. However, that positive tone contrasts with a growing discontent among European citizens. There is no denying that the European Union is in recovery mode, and that is a positive. Business confidence is rising, and manufacturing indices are in expansion. However, the pace of said expansion has moderated in the past months, and challenges remain. The European economy is not “in shape”, as the European Commission boosts, and this explains a significant part of the rising populist and radical vote.

According to the Bank of International Settlements and Merrill Lynch, Europe has more zombie companies today than before the crisis, i.e. companies that generate operating profits that do not cover their financial costs, despite all-time low-interest rates and an unprecedented monetary stimulus. European banks, at the end of 2016, had more than 1 trillion in non-performing loans, a figure that represents 5.1% of total loans compared to 1.5% in the US or Japan. Europe has gone from financial crisis to financial crisis, and recently we have had new episodes in Italy, Spain and Portugal.

But the key problem is unemployment. The European Commission “certifies” the exit from the crisis with unemployment of 9.1%, maintaining all its labour market rigidities, an unemployment rate that is more than double that of countries with flexible work legislations and dynamic business environments, such as the United States or the United Kingdom. More importantly, underemployment is still very high. In 2016 there were 9.5 million part-time workers in the EU-28. In addition to this, 8.8 million persons were available to work, but did not look for a job, and another 2.3 million persons were looking for jobs, without being able to start working in one within a short time period, according to Eurostat.

The tax burden in this period has been raised throughout the EU -with some exceptions, such as Ireland- with an average tax wedge of 45% on workers and 40% on companies. If we look at economic imbalances, the main ones are public debt of almost 90% of GDP and poor growth which, at an estimated 1.7%, is almost half its potential. Many politicians blame the European crisis on austerity. However, data debunks that myth. The winner of the crisis in Europe has been the bureaucratic system. With public spending averaging over 46% of GDP, an annual deficit of over 1.7% on average, and 90% debt, talking about austerity is simply incorrect.

These figures show that the European Union is far from being “in shape”, as the Commission states, and the election results prove that authorities and member states cannot continue to ignore the lack of engagement of a growing part of the population with the directed-economy and bureaucratic nature of this European model.

According to the Intelligent Regulation Forum and with the official data of the European Union for 2015, the member countries are subject to more than 40,000 rules by the mere fact of being part of the EU institutions. In total, including rules, directives, sector and industrial specifications and jurisprudence, they estimate that there are some 135,000 obligatory rules.

The European Union is 7.2% of the world population, 23.8% of the world’s GDP and 58% of the world’s welfare spending. If this model wants to survive, it needs to pay more attention on boosting growth and supporting job creators, or the whole of it will crumble under the rising debt and ageing population problem. The biggest problem for the Eurozone is demographic. Average age in the largest Eurozone countries ranges between 44 and 47. At the same time, United Nations estimates that the European Union population will peak and start shrinking in less than two decades. Less people, and older.

Ageing presents many challenges. The cost of healthcare and pensions rise, while tax revenues decrease as consumption and investment slow down. This demographic challenge creates a fiscal and productivity challenge that can only be reversed by attracting high added-value investment and incentivizing high productivity sectors. By ignoring these risks, the EU runs the risk of falling into the glorification of centralized planning first and foremost, absolute uniformity, and obsolete interventionism that has nothing to do with the plural, free and diverse United States of America.

There are evident solutions. There are clear positives about uniting countries to boost growth, employment and opportunities, but it makes little sense to try to copy a model, the French one, that has created stagnation for the better part of two decades, high taxes, unemployment and diminishing competitiveness. As such, the main solutions come from more Europe but less Brussels, something that many politicians might dislike, but it is an absolute necessity in the face of growing opposition to the existing model.

First and foremost, the taxation system cannot continue to be a burden on small and medium enterprises, who are responsible for more than 70% of added value and employment in the European Union, and a growing weight on the middle class, which suffers a tax wedge that ranges between 10 and 20 points higher than in the United States or the UK. The European Union needs to understand that consumption and job creation are not going to improve if the burden of the ever-expanding welfare state and government spending falls on the two economic agents that can drive the economy to a better shape, companies and the middle class.

The European Union must look at the diversity of cultures and stop pursuing uniformity at any cost. Inequality is not a policy, but a result. There is no improvement in inequality if all the measures are directed at redistribution of a diminishing pie. The best solution to inequality is jobs. And this cannot come if excessive regulation and uncompetitive taxation continue to drive the policy of the Union.

According to the PriceWaterhouseCoopers report “Paying Taxes”, average number of hours used to comply with regulation and taxes is higher in the European Union than the average of the OECD and the US, by between 6 to 15% more. These burdens make it more difficult for small companies to grow and become large enterprises. The European Union also shows a worrying trend of weaker transition from small to medium and large company, as well as relatively smaller companies than the US in each of the categories. A small company in Europe has, on average, less employees than one in the US. The high cost of labour, particularly social contributions, and the rigid legislation make it more difficult to make hiring decisions.

Therefore, the European Union must think local to address global challenges. Boost the positive differences of each community, reduce the tax wedge and bureaucratic requirements for small and growing businesses, improve the disposable income of the middle class by cutting taxes and supporting families to address the demographic issue by providing income tax deductions and making it easier for families to raise children.

The solution is simple but complex. Politicians in Europe like to believe that all must be organized and directed by them. But they should pay more attention to the rising radicalism. Radicalism cannot be fought by doing more of the same, but by giving those that felt left behind the tools to thrive. Not through inefficient subsidies and government spending, but through freedom.