Even The Penguins Are Panicking: North America Is Entering A Record-Setting Deep Freeze

North America is in the grip of a record-setting cold spell that’s set to culminate with the arrival of a “bomb cyclone” along the eastern seaboard late Thursday. The cold front has delivered temperatures that haven’t been seen in decades.

Already, stories about the epic cold snap have proliferated online. As we pointed out yesterday, a group of good Samaritans helped rescue a dozen elk that had crashed trough a thin patch of river ice and were in danger of freezing to death, or drowning. At the time, temperatures were below freezing across a staggering 92% of the US, with temperatures more than 20 degrees lower than their seasonal averages for this time of year.

Winter Storm Grayson, a very large and powerful winter storm is threatening the East Coast of the United States with heavy snow, intense winds, and record-setting low temperatures. Winter storm watches and warnings have been issued for many coastal regions in north Florida to Maine from Wednesday into late Thursday.

This week's storm may end up being worse than your average nor’easter. That’s because meteorologists say it could produce a “bomb cyclone,” otherwise known as a bombogenesis, a phenomenon that occurs when a system’s central pressure drops steeply – by 24 millibars or more - in 24 hours.

If current computer models hold, that’ll start to happen somewhere off Cape Hatteras, North Carolina, and continue as the storm moves north. Hurricane-force wind warnings have been posted off the coast where ships could encounter winds of 80 miles (130 kilometers) an hour and waves as high as 26 feet on Thursday.

Already, the unusual weather patterns are causing all sorts of strange phenomena around the country. According to the New York Times, it’s too cold for many zoo penguins, which have been taken inside as a precaution ahead of the storm. Meanwhile, sharks have washed up dead on the Atlantic coast.

The cold weather, which has been blamed for a handful of deaths, is expected to continue at least into the weekend, with temperatures most likely remaining below average and possibly setting records, according to Bob Oravec, a lead forecaster with the National Weather Service in College Park, Md.

The chill is the result of a jet stream that is shuttling arctic air from northwest Canada to the eastern United States and relief is, at best, days away, Oravec said.

Here are a few ways in which the cold snap is affecting the country, courtesy of the New York Times:

Records Are Being Set

As revelers marked the end of 2017 in Times Square, the temperature reached 9 degrees, making the New Year’s Eve celebration there the coldest since 1917.

No, Niagara Falls isn’t freezing over. The current is too fast for that to happen, no matter how cold it gets.

But the sustained cold spell has created a scene that would fit snugly in Disney’s “Frozen.” The mist drifting off the falls is freezing on contact with all it touches, coating tree branches, benches and railings with a solid layer of ice.

“Typically you will see this on a day or two on a much smaller scale, but at this point this cold snap has lasted for so many days, the ice is building thicker and thicker as these days continue,” said Andrea Czopp, a spokeswoman for Destination Niagara USA. 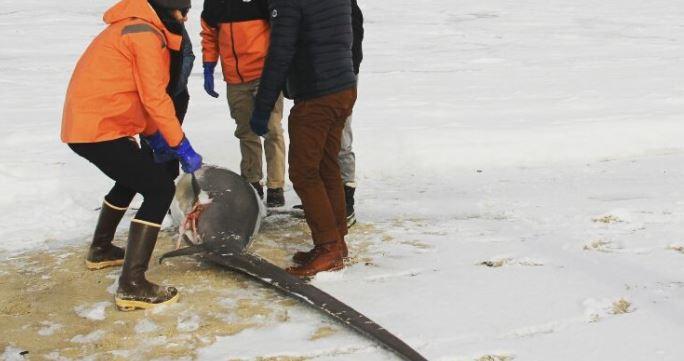 In New England, officials have found several sharks frozen on the shore, their deaths possibly accelerated by the chill.

“If you’ve got cold air, that’ll freeze their gills up very quickly,” Greg Skomal, a marine scientist for the Massachusetts Division of Marine Fisheries, told The New York Times. “Those gill filaments are very sensitive and it wouldn’t take long for the shark to die.”

The sharks may have gotten trapped in the waters by Cape Cod as they tried to migrate south, Mr. Skomal said.

Penguins Are At Risk

In Canada, officials at the Calgary Zoo brought their king penguins in from an outdoor enclosure last week after temperatures fell below minus 13 degrees Fahrenheit (minus 25 Celsius).

The penguins spend most of each winter outdoors, though they are often brought inside for short stretches as a precaution, a zoo curator, Malu Celli, told The Canadian Press.

“It’s not necessarily that it’s too cold for them,” she said. “I believe that physiologically, they can withstand colder weather than what we have here, but these are not wild birds.”

But for denizens of the Internet looking for something fresh to distract them, well, there’s at least one silver lining. The cold temps have afforded ample opportunities for making new memes – like this bubble sculpture.

Temperatures across North America are expected to decline today and tomorrow. The worst of the cold weather is expected to pass by end of day Sunday.