Given the major reshuffle in the voters on the FOMC, we suspect today's minutes will be shrugged off as 'old news', but the fact that gold prices have risen incessantly since Yellen raised rates at her last meeting suggests some language will be needed to tamp down that anti-dollar view. 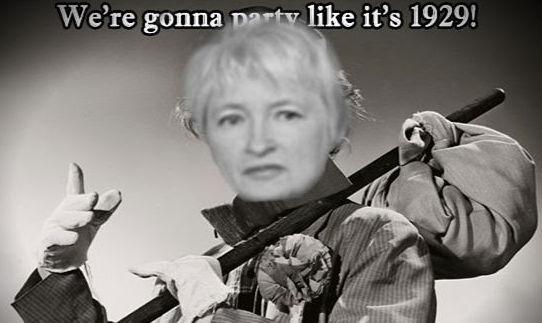 Hopes that the Minutes would clarify the confusion left by The Fed's growth outlook raise and inflation leave and increased its rate trajectory to 7 hikes (from 6), were dashed.

Bloomberg's Cameron Crise notes that while it's true that some notable doves are booted out of the voting rotation this year, keep an eye on whether an increasing number of meeting participants will require inflation measures to show up more forcefully before sanctioning another rate hike. If "several," "a number" or "many" committee members express some unease, then we could be looking at a properly painful squeeze of Treasury shorts.

Below are select excerpts from the FOMC meeting minutes that concluded on Dec. 13:

On the pace of rate hikes:

"Participants discussed several risks that, if realized, could necessitate a steeper path of increases in the target range; these risks included the possibility that inflation pressures could build unduly if output expanded well beyond its maximum sustainable level, perhaps owing to fiscal stimulus or accommodative financial market conditions."

Participants also discussed risks that could lead to a flatter trajectory for the federal funds rate in the medium term, including a failure of actual or expected inflation to move up to the Committee’s 2 percent objective. While participants generally saw the risks to the economic outlook as roughly balanced, they agreed that inflation developments should be monitored closely.

A few participants indicated that they were not comfortable with the degree of additional policy tightening through the end of 2018 implied by the median projections for the federal funds rate in the December SEP. They expressed concern that such a path of increases in the policy rate, while gradual, might prove inconsistent with a sustained return of inflation to 2 percent, or that the level of the federal funds rate might already be near its current neutral value.

Here is the unexpected uber-hawkish case on the trajectory of rate hikes:

A few other participants mentioned that they saw as appropriate a pace of additional policy tightening through the end of 2018 that was somewhat faster than that implied by the December SEP median forecast. They noted that financial conditions had not materially tightened since the removal of monetary policy accommodation began, that continued low interest rates risked financial instability in the future, or that the labor market was increasingly tight.

"Many participants expected the proposed cuts in personal taxes to provide some boost to consumer spending."

"Many participants judged that the proposed changes in business taxes, if enacted, would likely provide a modest boost to capital spending, although the magnitude of the effects was uncertain."

On policy failure and inflation not reaching the Fed's 2% target:

"Participants also discussed risks that could lead to a flatter trajectory for the federal funds rate in the medium term, including a failure of actual or expected inflation to move up to the Committee’s 2 percent objective."

As Bloomberg observes, there was also a lengthy discussion of the yield curve, suggesting that Bullard's and Kocherlakota's point of potential yield curve inversion were duly noted:

Meeting participants also discussed the recent narrowing of the gap between the yields on long- and short-maturity nominal Treasury securities, which had resulted in a flatter profile of the term structure of interest rates. Among the factors contributing to the flattening, participants pointed to recent increases in the target range for the federal funds rate, reductions in investors’ estimates of the longer-run neutral real interest rate, lower longerterm inflation expectations, and lower term premiums.

They generally agreed that the current degree of flatness of the yield curve was not unusual by historical standards. However, several participants thought that it would be important to continue to monitor the slope of the yield curve. Some expressed concern that a possible future inversion of the yield curve, with short-term yields rising above those on longer-term Treasury securities, could portend an economic slowdown, noting that inversions have preceded recessions over the past several decades, or that a protracted yield curve inversion could adversely affect the financial condition of banks and other financial institutions and pose risks to financial stability.

A couple of other participants viewed the flattening of the yield curve as an expected consequence of increases in the Committee’s target range for the federal funds rate, and judged that a yield curve inversion under such circumstances would not necessarily foreshadow or cause an economic downturn. It was also noted that contacts in the financial sector generally did not express concern about the recent flattening of the term structure.

There was the usual asset bubble discussion:

"In light of elevated asset valuations and low financial market volatility, a couple of participants expressed concern that the persistence of highly accommodative financial conditions could, over time, pose risks to financial stability."

And tied to that, the traditional observations of lack of tightening in financial conditions:

With regard to financial markets, some participants observed that financial conditions remained accommodative, citing a range of indicators including low interest rates, narrow credit spreads, high equity values, a lower dollar, and some evidence of easier terms for lending to risky borrowers.

On what companies would do with cash from tax cuts:

Many participants judged that the proposed changes in business taxes, if enacted, would likely provide a modest boost to capital spending, although the magnitude of the effects was uncertain. The resulting increase in the  capital stock could contribute to positive supply-side effects, including an expansion of potential output over the next few years. However, some business contacts and respondents to business surveys suggested that firms were cautious about expanding capital spending in response to the proposed tax changes or noted that the increase in cash flow that would result from corporate tax cuts was more likely to be used for mergers and acquisitions or for debt reduction and stock buybacks.

"participants generally viewed the medium-term outlook as little changed, and a majority commented that they continued to expect inflation to gradually return to the Committee’s 2 percent longer-run objective."

"Due to the persistent shortfall of inflation from the Committee’s 2 percent objective, or the risk that monetary policy could again become constrained by the zero lower bound, a few participants suggested that further study of potential alternative frameworks for the conduct of monetary policy such as price-level targeting or nominal GDP targeting could be useful."

On the topic of labor market slack:

"Many indicated that they expected cyclical pressures associated with a tightening labor market to show through to higher inflation over the medium term."

Since The Fed hiked rates in December at Yellen's last stand, there has only been one major asset winner... 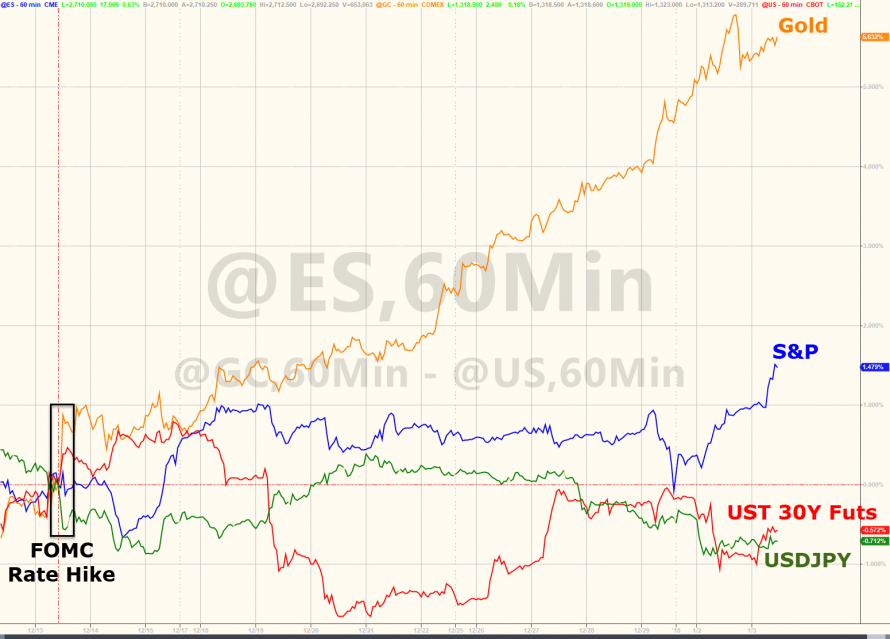 Gold Futures are up 9 days straight - has not been a longer winning streak since July 2011 (right before the USA ratings downgrade).

Also notable, while financial conditions did tighten modestly after the last rate hike, they have eased back to unchanged from the rate hike now...and the curve has collapsed... 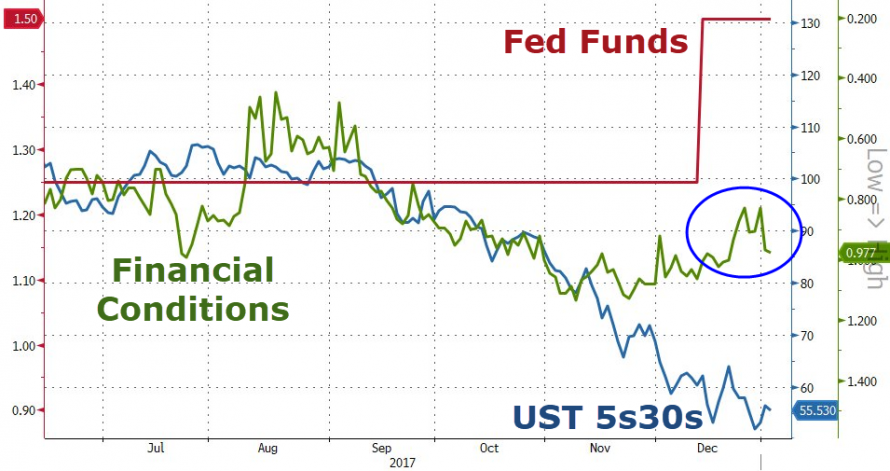 Which suggests the rate hikes will keep coming... March rate hike odds are at 66%... 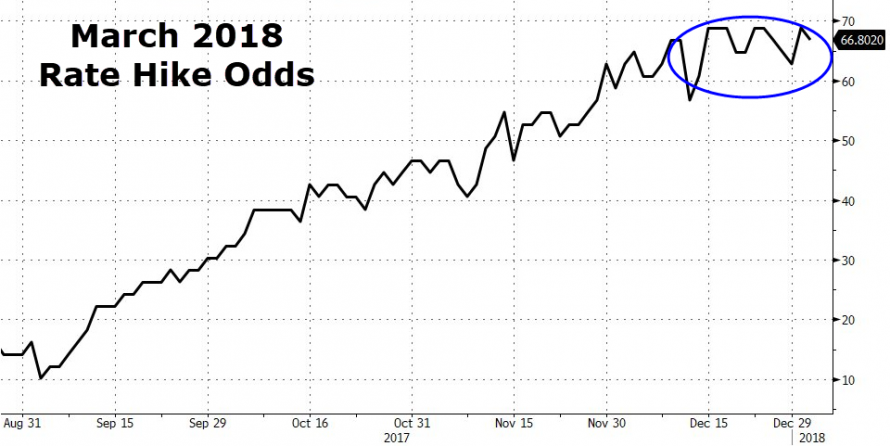