In late November, when most banks were putting the finishing touches on the glowingly bullish year-end reports, the bulk of which see the S&P closing 2018 at 2,800 or above, French bank SocGen appeared to catch the bug from its famously dour strategist Albert Edwards and published what to date remains the most pessimistic forecast of what is now the current year. This is what SocGen said in late November:

We are less enthusiastic about equities heading into 2018 – We do not see much upside on our major equity targets for the next 12 months. We expect stretched valuations and rising bond yields to limit equity index performances in 2018 and the prospect of a US economic slowdown in 2020 to further cramp returns in 2019. We also raise some concerns about the quantity of shorts on volatility, which could potentially strongly deteriorate the risk reward profile of equity markets.

SocGen also noted that the S&P 500 has reached the bank's target for the end of this cycle (2,500pts) and has since entering expensive territory (the S&P is now more than 200 points higher). Underscoring this point, SocGen said that on all the metrics, "US equities are trading at levels only seen during the late-90s bubble. Since Trump’s election, the US equity market has risen 24%, but only half of this came from earnings growth. The other half has been driven by P/E expansion." Finally, SocGen said that according to its calculations, the US equity market has already fully pricing in tax reform, while the rise in bond yields and Fed repricing should be headwinds against further US equity rerating."

In short: SocGen sees a world that is the diametric opposite of the low inflation, coordinated global growth "Goldilocks" scenario that serves as the basis of every single bullish forecast (all of which carry the disclaimer that should even a trace of inflation emerge, all bets are off).

Fast forward one and a half months later, with the S&P 200 points higher, when we get a chance to refresh if SocGen's strategists have thrown in the towel on their bearish base case? The answer, as SocGen's Alain Bokozba writes in a note issued this morning, is clearly no, and in fact Socgen remains defiant urging clients to "be ready for the end of Goldilocks." Here's why:

We began reducing our allocation risk profile in September and continue to do so. Asset valuations range from high to very high, but for emerging market (EM) assets, risk-taking and momentum-investment are at their peak. We think resynchronisation of global growth leaves the door open for a number of central banks to implement faster exit strategies than generally expected, especially the ECB and (later) the BoJ. The US economy is late cycle and impacted by perceived poor political leadership: we recommend sticking to a structurally bearish view on the still-expensive USD, which does not augur that badly for EM and commodities overall. 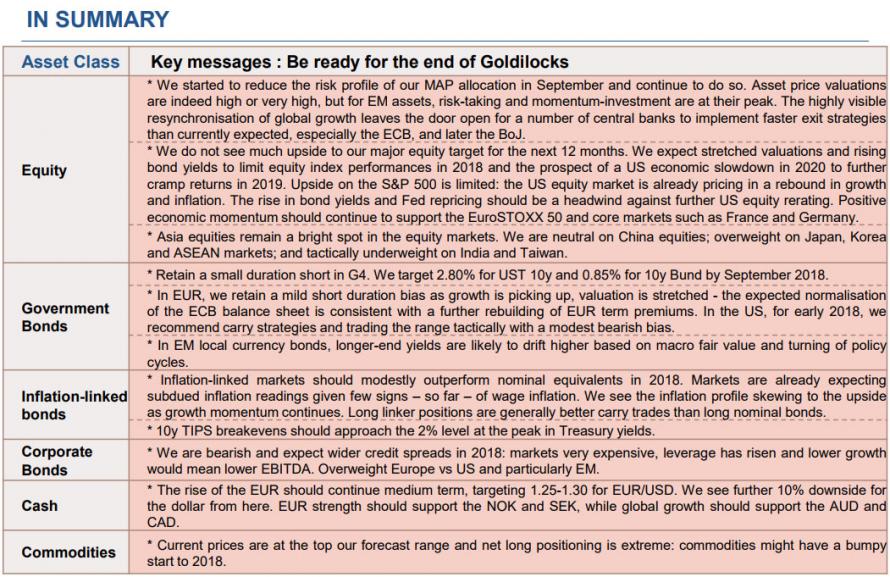 What does this mean in terms of investment strategy?

According to the French bank, clients should reduce US equities further, and reallocate into 10y Treasuries as "US equities are not only trading at super-inflated absolute valuation levels, but as of recently also relative to bonds. With an equity-risk premium at a low c.3%, the S&P 500 now signals an expected return of between only zero and 5%, while the risks are not negligible. Corporate bonds offer little to offset the risk from high corporate debt, alongside the late-stage economic cycle and with tax cuts probably already priced in. We recommend increased exposure to 10y US Treasuries, which are protected somewhat by high global demand for the high remuneration."

Visually, this looks as follows: 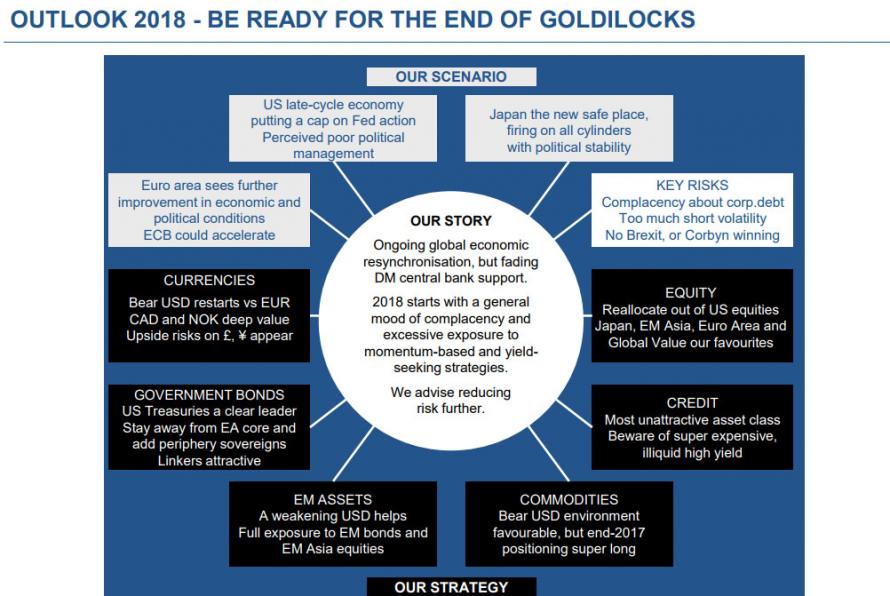 SocGen then lays out its seven Key Calls for 2017, whose details we present at the bottom of this article, and which are summarized as follows: 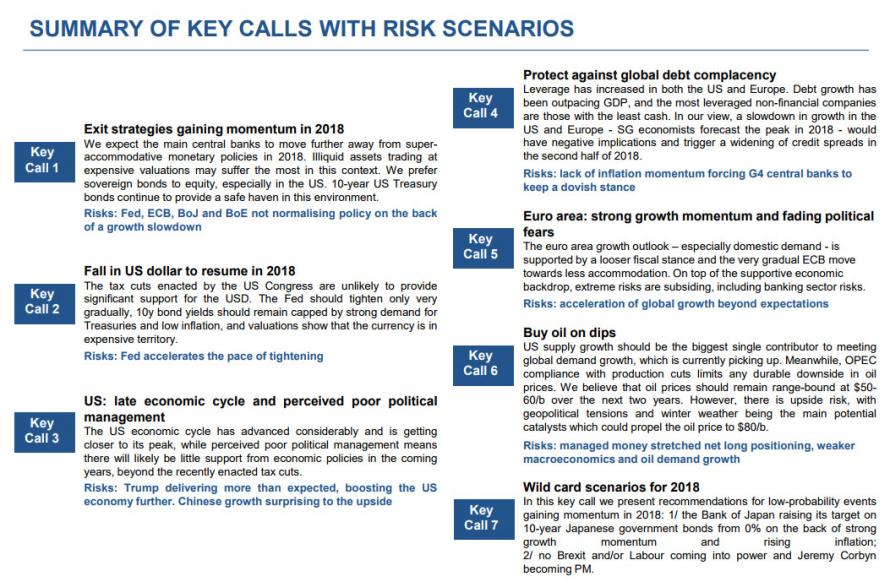 And here is the detailed breakdown of the 7 scenarios:

We expect the main central banks to move farther away from super accommodative monetary policies in 2018. Illiquid assets trading at expensive valuations may suffer the most in this context. We prefer sovereign bonds to equities, especially in the US. The 10y US Treasury continues to provide a safe haven in this environment.

Risks: Fed, ECB, BoJ and BoE not normalising policy due to a growth slowdown

The tax cuts enacted by the US Congress are unlikely to provide significant support for the USD. The Fed should tighten only very gradually, 10y bond yields should remain capped by strong demand for Treasuries and low inflation, and valuations show that the currency is in expensive territory.

The US economic cycle has advanced considerably, getting closer to its peak, while perceived poor political management means that there will likely be little support from economic policies in the coming years, beyond the tax cuts.

Leverage has increased in both the US and Europe. Debt growth has been outpacing GDP, and the most leveraged non-financial companies are those with the least cash. In our view, a slowdown in growth in the US and Europe – SG economists forecast the peak in 2018 – would have negative implications and trigger a widening of credit spreads in 2H18.

The euro area growth outlook – especially domestic demand – is being supported by a looser fiscal stance and very gradual ECB move toward less accommodation. On top of the supportive economic backdrop, extreme risks are subsiding, including banking sector risks.

US supply growth should be the biggest single contributor to meeting global demand growth, which is currently picking up. Meanwhile, OPEC compliance with production cuts limits any durable downside in oil prices. We think oil prices should remain range-bound at $50-60/bbl over the next two years. However, there is upside risk, with geopolitical tensions and winter weather the main potential catalysts, which could propel oil to $80/bbl.

Currently low-probability events that might gain momentum in 2018: 1) the BoJ raises its 10y Japanese government bond target from 0% on the back of the strong growth momentum and rising inflation; 2) no Brexit and/or Labour comes to power and Jeremy Corbyn becomes PM.