Authored by Sam Radbil via Abodo,

Politically, culturally, and ecologically, 2017 was a year of anxiety. Hurricanes and flooding ravaged the Virgin Islands, Puerto Rico, and Texas. Political controversies dominated headlines and push-notifications. Relations with North Korea reached their lowest point in decades, raising fears of a nuclear standoff.

Economically, though, things remained stable in 2017. The economy continued to recover from the market crash of 2008, with unemployment reaching its lowest point in 17 years. Although homeownership is rebounding from its nadir last decade, renting now far outpaces ownership. According to a new report by the Joint Center for Housing Studies of Harvard University, renting households have been steadily rising since 2004, with 2017 marking the first slight decline in those 13 years. As of the middle of 2017, the JCHS estimates that there are about 43 million renters in the U.S. — more than a third of U.S. householders.

In an effort to give renters (and potential renters) market information in close to real time, ABODO releases monthly reports on rental trends throughout the year. Our Annual Rent Report is a more zoomed-out look at the year in renting. How did rent prices change nationally? At the state level? Where did rent increase the most over 2016, and where did it decline? Where are the 10 most expensive rental markets? Let’s start with a look at what happened nationwide.

Nationally, rents were on the rise over the course of 2017. The national median rent for one-bedrooms rose 2.4%, ending the year at $1,040. Rents for two-bedroom apartments were $1,252 in December, 3% higher than they were in January. 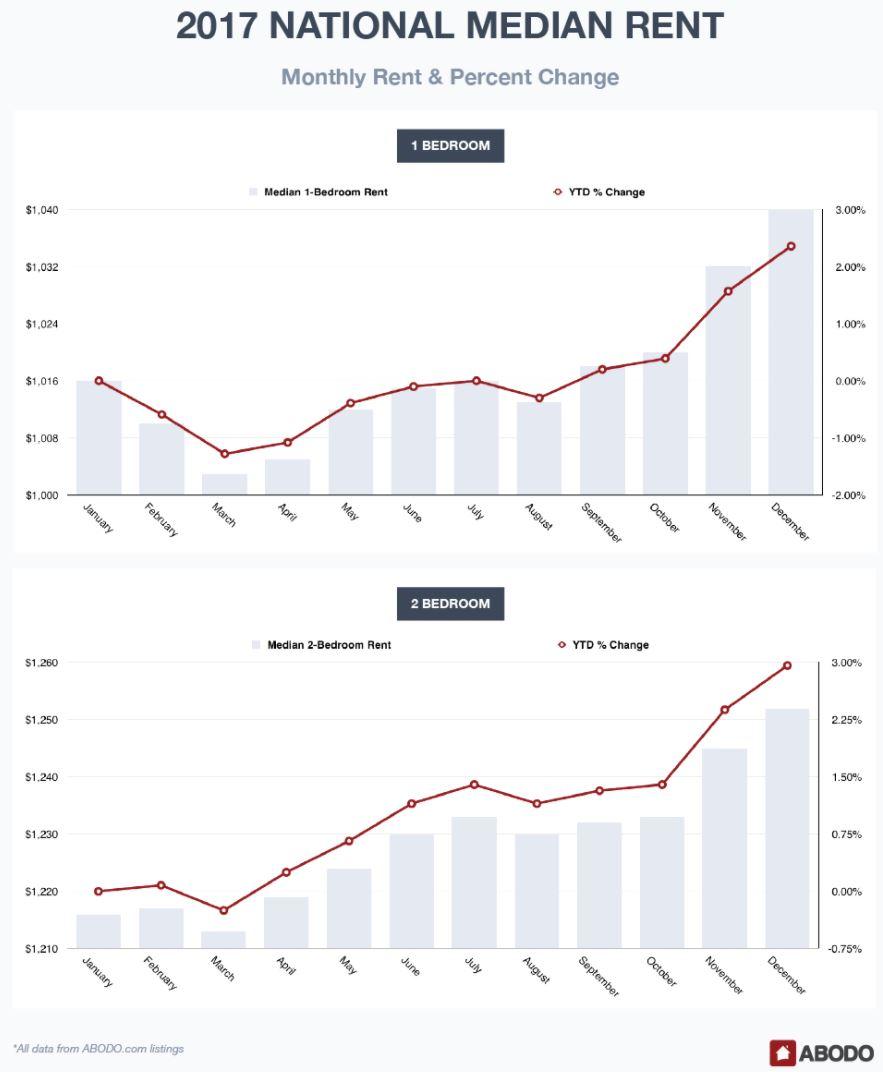 But it didn’t always look like we were headed for an increase. One-bedroom median rents fell for much of the first quarter, and through June they were within 1.5 percentage points of January’s figure. In July, the median one-bedroom rent was $1,016 — exactly what it was in January. But the fall saw marked increases. The year’s most volatile months were October, November, and December, which saw the median rent increasing far more quickly than at any other time.

Rent went up in 28 states last year, as well as the District of Columbia. It decreased in 21 states, and stayed the same in just one: South Dakota. 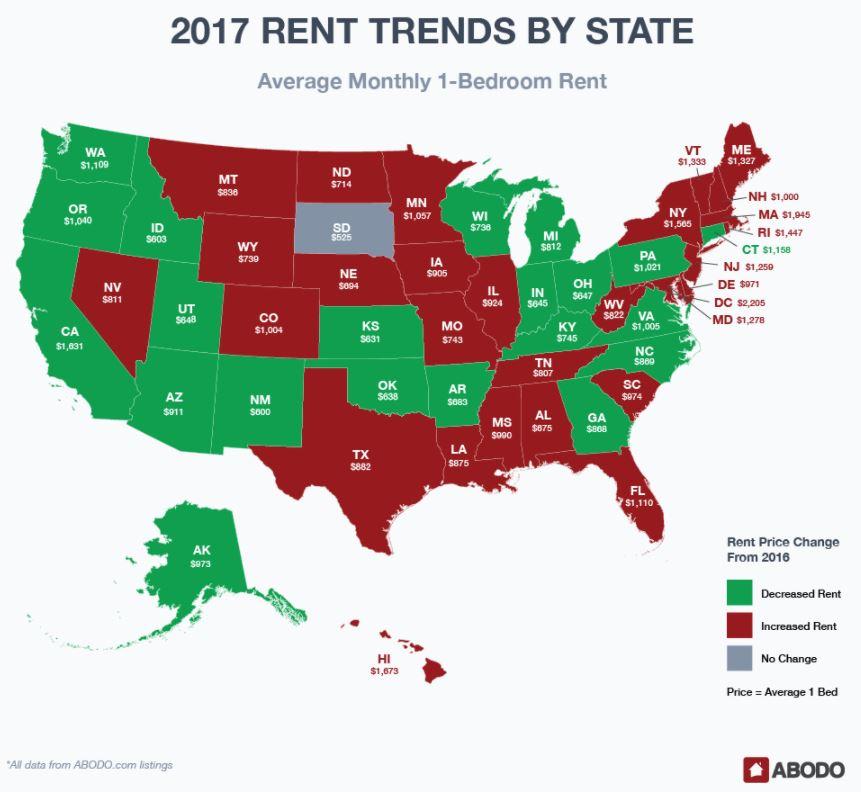 If you’re looking for low rents, head for the Plains or the Southwest. With an average rent of $525 per month, South Dakota took the crown for the nation’s lowest rent. New Mexico ($600), Idaho ($603), Kansas ($631), and Oklahoma ($638) weren’t far behind. Aside from South Dakota, where monthly changes were flat, all of these states saw their rents decrease month to month, on average.

Looking at statewide and national rental data gives us a good idea of what trends renters around the country are seeing. But if we take a closer look city by city and by apartment type, a more diverse set of trends emerge. One tendency, however, remains the same: Rent increases outpace the decreases.

For one-bedroom apartments, 2017 monthly average rents increased the most in New Orleans, LA, which went up an average of 4% each month. Reno, NV, is the only other city with average one-bedroom rent fluctuations above 3%, at 3.2%. Unsurprisingly, two California cities also earned spots on our list of highest average monthly changes: Santa Ana (1.6%), and Sacramento (1.5%). 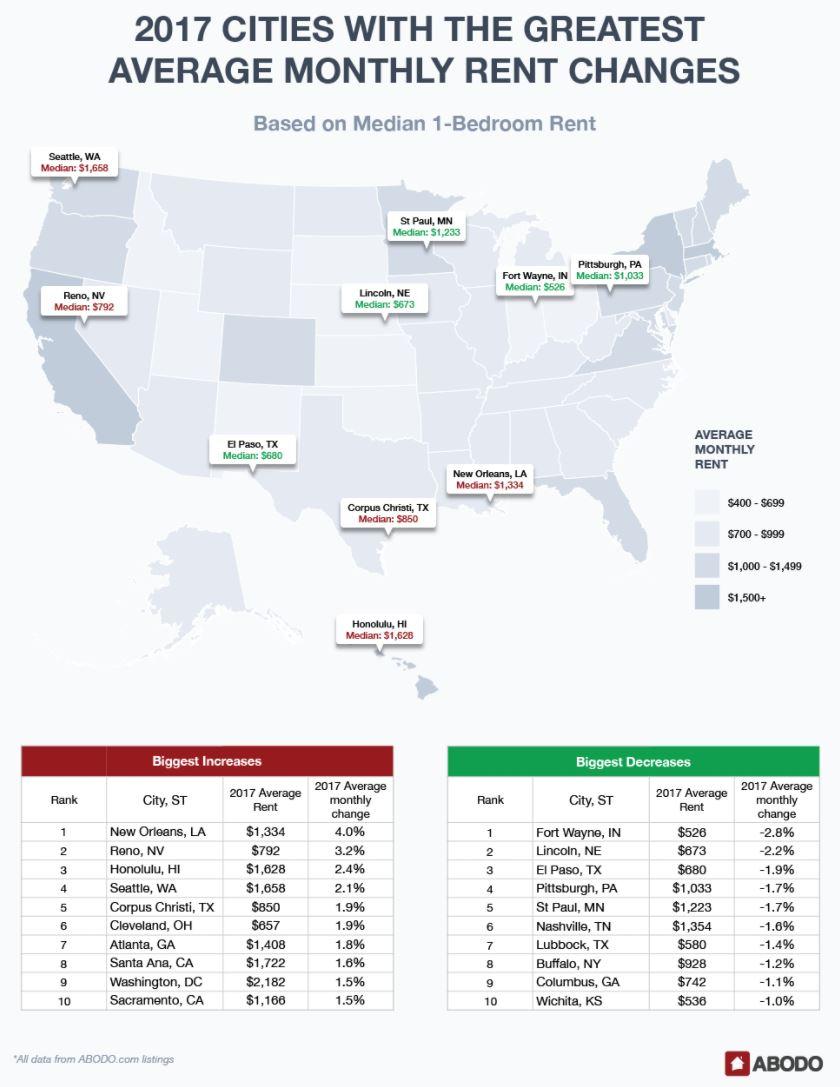 Honolulu, HI, and Seattle, WA — two rental markets known for their volatile prices — also make our top five for greatest average monthly change, up an average of 2.4% and 2.1% each month, respectively.

Notably, Fort Wayne, IN, holds its place for largest average monthly decrease for two-bedroom apartments, with an average monthly change of -2.8%. Six other cities also maintain a spot in our top 10 decreases: El Paso, TX (-1.6%); Pittsburgh, PA (-1.3%); Buffalo, NY (-2.1%); St. Paul, MN (-.8%); and Columbus, GA (-.9%). The most surprising city on the list is San Francisco, CA — continually labeled as the most expensive rental market in the country. Nonetheless, two-bedroom rents there dropped an average of .9% a month. 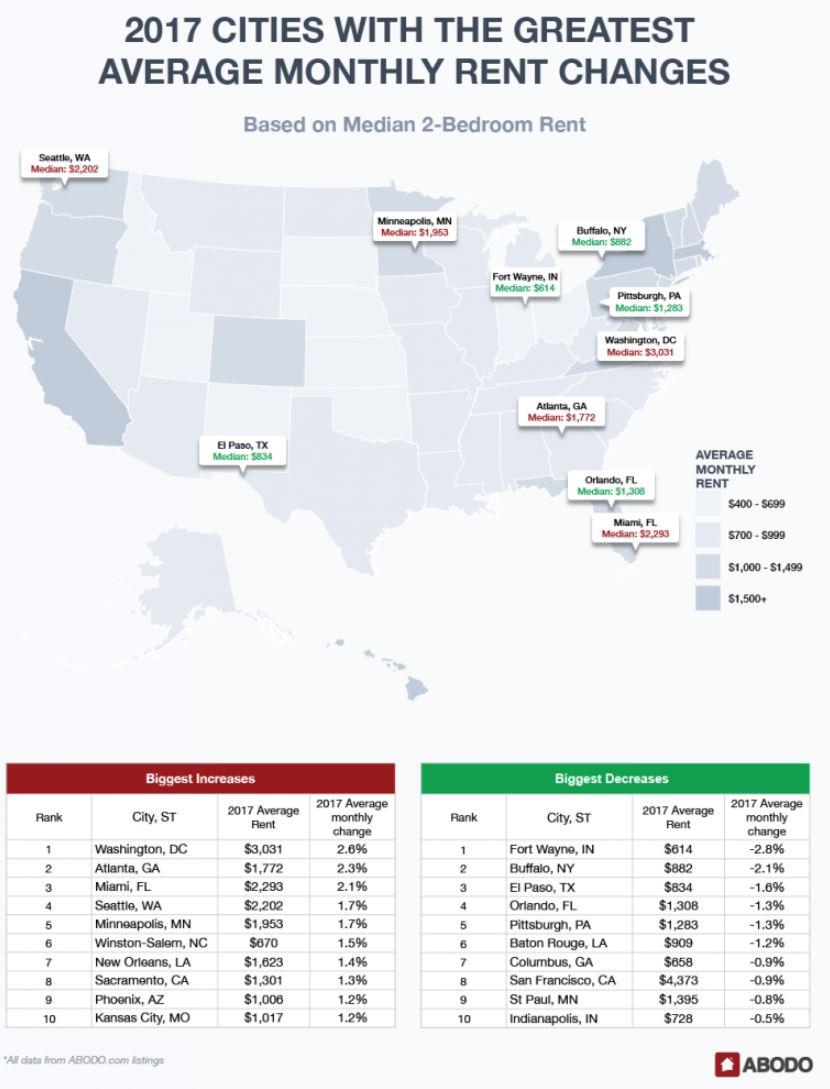 The composition of our top 10 average monthly two-bedroom rent increases also remains very similar to list for one-bedroom increases, although these increases are markedly less steep. New Orleans, LA, drops to #7, with an average increase of 1.4%, while Washington, D.C. takes its place at #1, with an average increase of 2.6%. Atlanta, GA, comes in at #2 with 2.3%, and Seattle, WA, holds its #4 slot with 1.7%, tied with the rate of Minneapolis, MN, apartments. Sacramento, CA crawls up the list from #10 to #8, with an increase of 1.3%.

Highest & Lowest Rents in the Country

Coming in at an average monthly rent of $4,373, San Francisco, CA, continues to hold the nation’s highest price for a one-bedroom apartment by a margin of more than $1,000. And San Francisco’s rents actually decreased this year by an average of .9% each month. 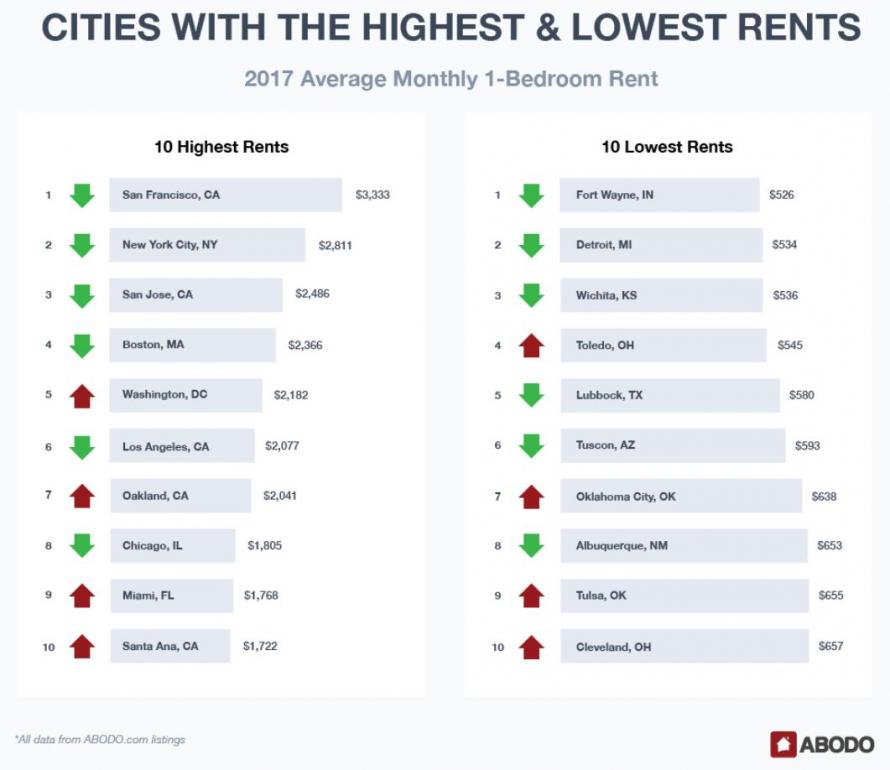 New York City, NY, comes in second, with one-bedroom apartments going for $3,234, which also saw small average monthly decreases of .3%. NYC is followed closely by Los Angeles, CA ($3,099), and Washington, D.C ($3,031), both of which saw rises throughout the year.

Renters in Detroit, MI, enjoyed the lowest average monthly rent of the year: $613 for a one-bedroom. That’s one-seventh the cost of a one-bedroom in San Francisco. At just a dollar more, Fort Wayne, IN, has the nation’s second-cheapest rent, after topping our lists for largest rent average monthly decreases for both one- and two-bedrooms.

Lubbock, TX, pulled off an interesting feat, landing at #7 for cheapest one-bedroom rents with an average monthly change of nothing whatsoever. There’s something to be said for stable rents.

With the recent JHCS report predicting that the past decade of rapid growth in renting households might be coming to an end, we might be on the cusp of an new rental landscape. In 2017, we saw about eight months of slow declines in rent prices, followed by four months of increases that more than made up for the early year rent drops. What does 2018 have in store?

Nationwide, 2018 starts with slightly higher rents for both one- and two-bedroom apartments: The national median one-bedroom rent is $1,046, a .58% increase over December, while two-bedroom rents saw only a negligible .17% increase to $1,152.

To make sure we’re including accurate data for as many cities as possible, we’re expanding our 2018 reports to include nearly 20 more cities. We’ve also dropped a few cities that no longer match our parameters for minimum population and property count thresholds. (For more detail, visit our methodology section.) 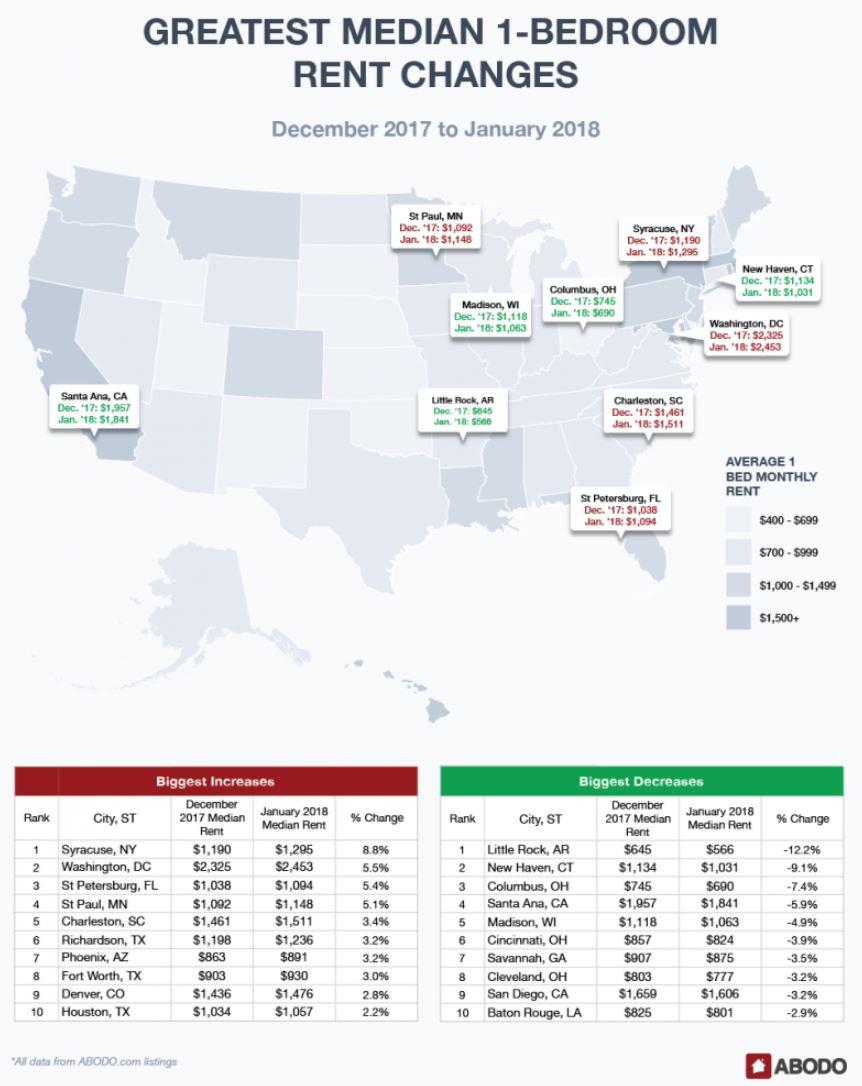 Two other Ohio cities also saw significant decreases in January. One-bedroom rents in Cincinnati are down 3.9%, to $824, and Cleveland’s are down 3.2%, to $777. 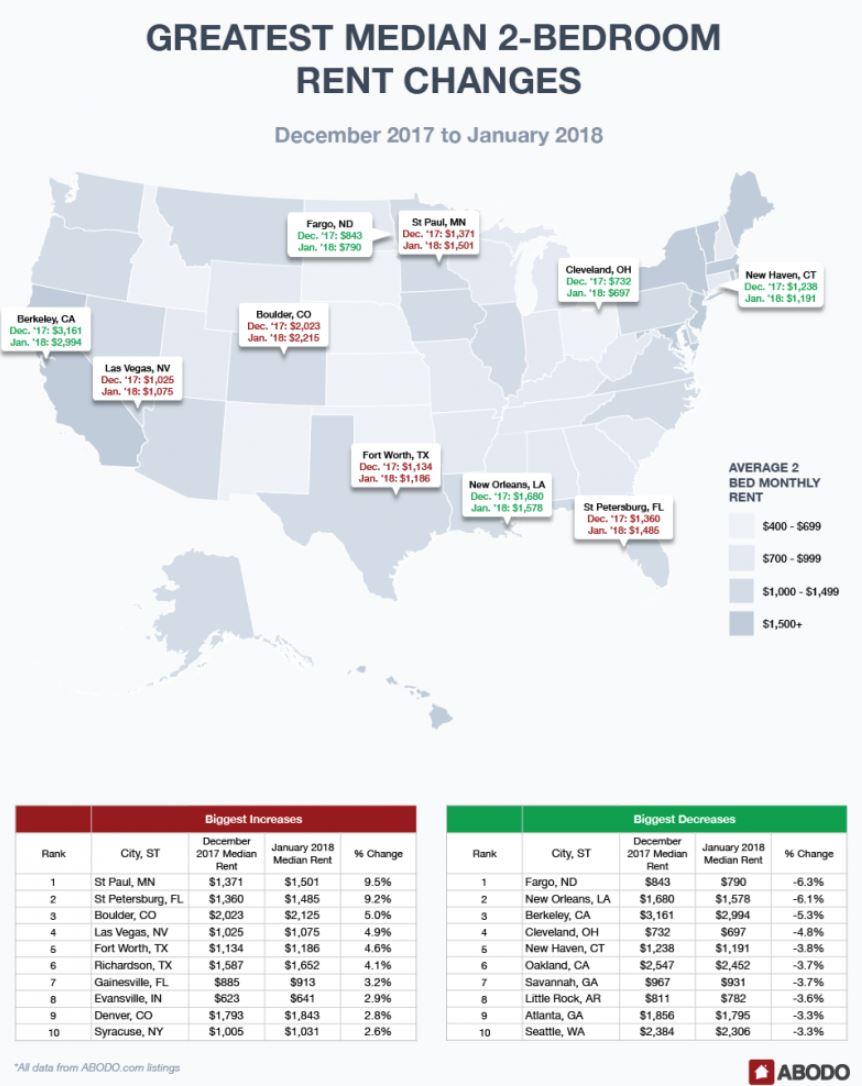 So far, national rent trends paint a mild picture going into 2018. We’ll keep an eye on the trends, and report back next month.