In the course of less than a day, former Trump strategist Steve Bannon has gone from simply "former Trump strategist" to "radioactive backstabber," after The Guardian reported that Bannon, in Michael Wolff's new book "Fire and Fury, called a June 2016 meeting at Trump tower involving Russian attorney Natalia Veselnitskaya "treasonous" and "unpatriotic."

"Even if you thought that this was not treasonous, or unpatriotic, or bad shit, and I happen to think it’s all of that, you should have called the FBI immediately."

Steve had the honor of working in the White House & serving the country. Unfortunately, he squandered that privilege & turned that opportunity into a nightmare of backstabbing, harassing, leaking, lying & undermining the President. Steve is not a strategist, he is an opportunist 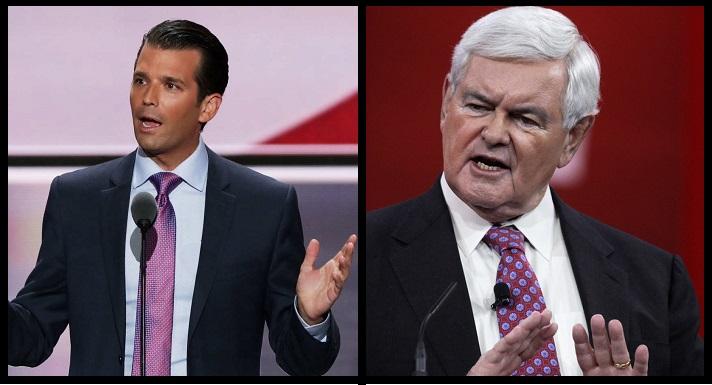 Newt Gingrich chimed in on Fox News, telling Neil Cavuto, "I think that Bannon thinks he's extraordinarily important. But the fact is, Trump had won the nomination without Bannon. Trump would have won the presidency without Bannon. And Trump has governed without Bannon."

So I think there's an exaggerated sense of who Steve is. And I think, remember, this is a guy who got fired. So you have a guy who has been fired who is trying to claim a bunch of things, which he apparently did not claim at the time.

And luckily for the president, he's really come to distinguish between the things that matter and the things that don't. The meeting this weekend at Camp David matters with the Republican leadership. Steve Bannon saying a bunch of junk doesn't really matter in the long run. It will disappear. -Newt Gingrich

Trump Jr. also replied to a tweet by conservative pundit Bill Mitchell, which quotes a portion of Bannon's book, reading:

"On Election Night, when the unexpected trend , Trump might actually win, seemed confirmed, Don Jr. told a friend that his father, or DJT, as he calls him, looked as if he had seen a ghost. Melania was in tears—and not of joy."

Trump Jr. responded: "Another good one. Anyone who knows me or follows me knows that's about as far from something I would say or how I speak as possible... What a joke."

Another good one. Anyone who knows me or follows me knows that's about as far from something I would say or how I speak as possible... What a joke.😂 https://t.co/4L9rYK8W56

And earlier in the day, Trump Jr. tweeted "Andrew Breitbart would be ashamed of the division and lies Steve Bannon is spreading!," after tweeting "Wow, just looked at the comments section on Breitbart. Wow. When Bannon has lost Breitbart, he's left with . . . umm, nothing."

Andrew Breitbart would be ashamed of the division and lies Steve Bannon is spreading!

Wow, Just looked at the comments section on Breitbart. Wow. When Bannon has lost Breitbart, he’s left with . . . umm, nothing.

Thanks Steve. Keep up the great work. https://t.co/J9O8CUfJAD

Several other tweets received Trump Jr. retweets throughout the day, including:

"Mr. Bannon, the WSJ got an advance copy of that book..." pic.twitter.com/mDvg6h2Qy6

There is no side to choose. There is no dilemma here. @realDonaldTrump and @DonaldJTrumpJr are patriotic class acts who have the best interests of this nation at heart.

Nothing I despise more than jealous disloyalty.

So, someone tell me how the ejecting of Bannon will hurt the movement?

It won't hurt the movement no matter what Senator Roy Moore says. pic.twitter.com/GAGJfgNr4Y

And now, it appears as though Bannon may have lost any hope of cobbling together political capital. As US News reports;

Despite his blatant miscalculation and the animosity he stirred among traditional Republicans, Bannon's enduring influence was that he purportedly had a direct line to Trump – the White House confirmed they spoke by phone last month – and could help mold the president's thoughts on policy and political strategy.

"Now that he is on his own, Steve is learning that winning isn't as easy as I make it look," Trump said in the statement. "Steve doesn't represent my base – he's only in it for himself."

The extraordinary breakup between the two larger-than-life comrades led to immediate fallout across the Republican Party. GOP leadership rejoiced at Bannon's fall from grace, with allies of Senate Majority Leader Mitch McConnell reveling in and sharing the president's takedown.

Bannon's split from the Trumps puts wealthy GOP donor Robert Mercer and his daughter, Rebekah Mercer in an awkward spot - as the financier have financially supported Breitbart, while also supporting President Trump and his GOP causes. Mercer announced in November that he was selling his stake in his company to his daughters - while at the time, making it clear that while he occasionally discusses politics with Bannon, he's not always aligned with him.

And as Trump Jr. said earlier today - when Bannon has lost Breitbart, "he's left with ... ummm, nothing."

In September, Bannon appeared on 60 minutes where heb called himself a "street fighter" and "declared war on the GOP" for trying to "nullify the election." Bannon also said that the Trump administration made the "original sin" of embracing the establishment. "I mean, we totally embraced the establishment ... Because ya had to staff a government."

Bannon also said he was going to be Trump's "wing man outside for the entire time, to protect [Trump] and to "make sure his enemies know that there's no free shot on goal."

Well - it looks like Bannon just took a shot on his own goal, and will be cast into radioactive irrelevancy for time immemorial.