Anatomy Of A Crypto-Nightmare: Ripple CEO Is Now Richer Than Zuckerberg 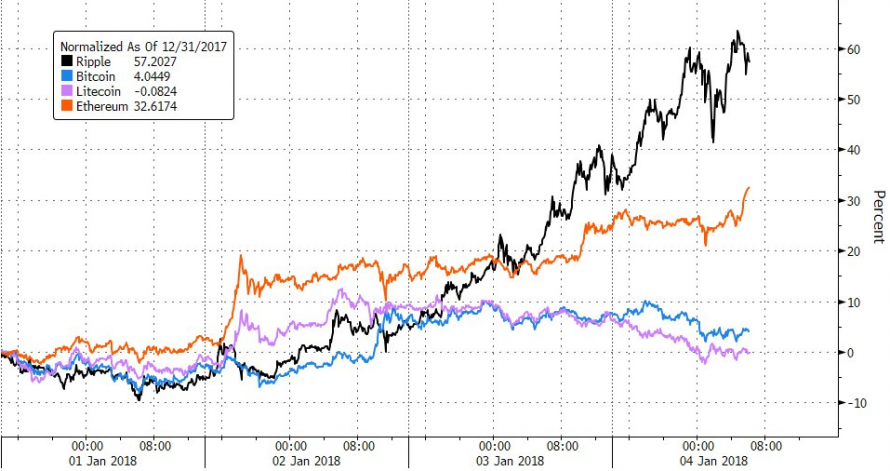 Ripple has surged ahead of Ethereum as the second-largest cryptocurrency by market cap... 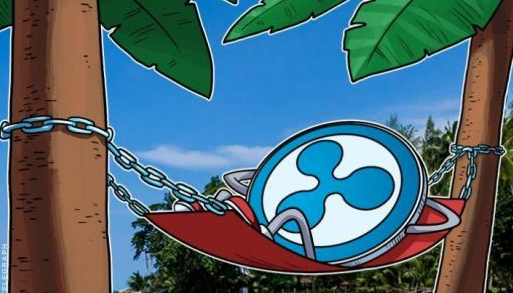 At one Point in the 1989 Japanese real estate bubble, the Imperial Palace in Japan was said to be worth more than the entire state of California,, things that don't make sense don't last....be careful out there

But  it is Tom Luongo that is most-concerned at this "crypto-nightmare" and for good reason...

Amidst all of the bullish talk about cryptocurrencies we know that a strike back from the banking system and its owners is coming.  In fact, the attack as I see it is well underway.

And it began with the attack on the credibility of Bitcoin Cash and it’s continuing with the insane pump of Ripple and any coin which has direct ties to old money.  What I want to posit today is how the next crash in the cryptocurrency markets can, and likely will, play out.

To lay this out you have to believe a few things are true.

Ripple, otherwise known as ‘BanksterCoin’ among we crypto-enthusiasts is the stalking horse of the cryptocurrency industry.  It’s meteoric rise in price coincides with Bitcoin’s peak and subsequent meandering.  It was done, timing-wise, to see articles like these (here, here and here) written as we ring in the new year.

Look at the situation in Bitcoin.  After the failure to implement the New York Agreement, something that didn’t have to be an all-or-nothing proposition, Bitcoin spiked from $5000 to a high near $20,000 in less than a month.  Transaction fees soared, exchanges became illiquid, getting alt-coins off some exchanges was difficult as many were revealed (at least in the short term) to not have supply of the underlying assets people were ‘trading’ in their pools.

Services like Changelly and Shapeshift have much smaller lists of coins available for easy exchange than they did a month ago.  Try buying tokens like WAVES, STEEM, Golem, NEO or Komodo on these services.  You can’t.  They can’t source actual tokens or the gateways to exchange them are down.

The best way to kill a market is to get retail investors buying the peak and selling into it. Such is the stuff bear markets are made of.  It’s imperative to break retail investor sentiment down.  That’s how markets are brought to heel.  Then rotating out of that market into the next market you want to promote.  This is what the banking industry does with its sell-side ‘analysis’ all the time.

I have a rule, when Goldman-Sachs says “Buy” I sell and vice versa.  In my Universe, rightly or wrongly, Goldman and their ilk are still trading against its recommendations and its clients.  And if it’s not allowed to do so anymore *wink* *wink* because of Dodd-Frank then in the unregulated crypto-markets you should bet that they, J.P. Morgan and the rest of them are.

So, it’s easy to believe in an irrational pump of Bitcoin to $20,000 and the subsequent rotation out and into Ripple, boosting its price and profile, while leaving ‘teh newbz’ hanging at the top.  Add in Bitcoin futures trading to help the tail wag the dog, insane transaction fees that have everyone wondering what’s so great about this Bitcoin if it costs $30 to move $100 and you have a set-up for carnage.

The spike to $20,000, in my opinion, was created by the very hinckey roll-out of rival Bitcoin Cash by Coinbase last month.  The goal there was to sow confusion and undermine Bitcoin Cash as an alternative to Bitcoin.  Again, if you want control over the entire market, you do so by killing off real competition.

See, folks, all of this confusion and carnage comes from not having any kind of centralized control. But, hey, there’s this new cool thing called Ripple which solves all of that and the price is going bonkers!

To Ethereum and Beyond

In response to this, Ethereum begins another push towards $1000.  Now, Ethereum has its own problems that are technology-based.  Ultimately, its blockchain is only as secure as the code of the tokens issued on it.

We’ve seen this in reality a couple of times, including the hack because of bad code that forced a fork of the Etherum blockchain which created Ethereum Classic (ETC) and Ethereum (ETH).

While I fully believe that one (or many) of these Ethereum-based projects is likely to create another event like that one, the pure cynic in me says, “Why wait?”

If you were the bad guys wouldn’t that be your plan in the first place?  Create a crypto-project using ERC-20 tokens that resolve and clear on the Ethereum blockchain with the intention of breaking it.  Invite investor money in, say fifty million dollars.  A reasonable, but not insane amount of money.

Then let the code run until such time that it will cause maximal damage to Ethereum and the whole crypto-community.  The token goes up four or five times because that’s simply what is happening across the space.

At that point you’ve created a $200+ million meltdown and negative headlines galore.

At this point Bitcoin is neutralized and controlled, Ethereum is discredited and something like that would cause a major panic which is exploited by the same prop trading desks that blew the bubble up in the first place.

If you time that with a spike in Ripple, the banker-acceptable coin, and crash it too, you’ll take down most of the industry in almost no time.  The psychological damage from a scenario like this will create bear market not unlike the one created post Dot-Com bubble.

And like that bust, only those companies that are willing to play ball with Wall St. and Washington D.C. will be promoted and allowed to thrive.

If you don’t think Wall St. isn’t thinking in these terms then you aren’t a serious crypto-investor.  This is the nightmare scenario, or one like it.

This is why I continue to bang on about the need for decentralized exchanges where the kind of manipulation described above is harder, if not impossible, to pull off.  I fundamentally do not believe most of the ‘liquidity’ that exists on exchanges like HitBTC, Bittrex, GDAX, etc. exists.

Between the false liquidity created by Tether and the potential for running fractional reserves it’s not hard to posit. It doesn’t take the weight of the entire Bitcoin market to raise the price.  It just takes one guy willing to buy the ask.  Once sellers lift their offers in response to a wave of buying things go up quick, especially with programmatic, algo-driven trading.

These exchanges who are not holding all deposits as smart contracts off-exchange with 100%+ reserves like BitShares are vulnerable to major price rises creating liquidity problems, which only adds to the perception that the industry is amateur-hour.

Another solution aside from Bitshares is Komodo’s BarterDEX, which exclusively trades through cross-chain atomic swaps and has no need for a third party intermediary.   Both of these, to me, represent where the industry needs to go to avoid us ending up with Ripple and Goldman still running the show.

Remember, no one is operating BitShares’ exchange.  It’s completely blockchain-based.  It has a fully-tradeable profit-token, OBITS, which distributes monthly profits from the exchange back to the token holders (current yield is around 4%). There is no central pool of liquidity that requires ever-growing ties to credit-providers.  The network only manages assets that have been deposited onto it.

Projects like AriseBank (full disclosure I bought into its ICO), I think, deserve a look.  AriseBank partnered with BitShares to provide the back-end technology to facilitate currency-swaps and brokerage services.  This is billing itself as the world’s first truly decentralized bank, designed to compete directly with the major banks and provide a new business model for banking altogether.

So, as 2018 plays out we as traders and investors need to be aware of the dangers of centralized liquidity and move our liquidity off of them, supporting projects that will build the kind of infrastructure Bitcoin’s initial design was supposed to support.

So many people who have gotten into cryptocurrencies in 2017 will not have an exit strategy in 2018 when the fan gets hit.  As we saw in the peak in December getting your money into or off of Coinbase was a nightmare.

Viewing the market structure through this lens provides a way to siphon off some of the energy the banks are propelling cryptos with to not only fatten your wallets but bring validity and stability to the markets and businesses that will carry on the fight before it’s yet another case of “Meet the new boss, same as the old boss.”