North Korea is on a roll: just hours after it emerged that in a diplomatic victory for the Kim regime the US and South Korea agreed not to hold military drills during the Olympics, moments ago Yonhap reported that in the latest sign of de-escalation between the neighboring rivals, South and North Korea agreed on Friday to hold high-level talks next week to discuss Pyongyang's potential participation in the PyeongChang Winter Olympics as well as ways to improve ties. 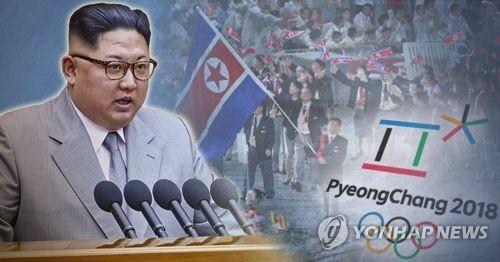 North Korea notified Seoul that it has accepted South Korea's latest offer for talks next Tuesday, according to Seoul's unification ministry.

"The two sides decided to discuss working-level issues for the talks by exchanging documents," Baik Tae-hyun, ministry spokesman at the ministry, told a press briefing.

The meeting, on 9 January, will focus on finding a way for North Korean athletes to attend the Winter Olympic Games in South Korea in February, the BBC adds. As we reported previously, North Korean leader Kim Jong-un said this week that sending a delegation to the games would be "a good opportunity to show unity of the people".

The meeting is expected to be held at Panmunjom, on the border. The so-called peace village, in the heavily guarded demilitarised zone (DMZ), is where the two sides have historically held talks.

The move came after North Korean leader Kim Jong-un expressed willingness to send a delegation to the Olympics to be held in the South next month and said the country is open to inter-Korean talks over the matter during his New Year address. The South proposed Tuesday for a high-level meeting in response.

And, as discussed earlier today, the agreement came as the South and the United States agreed late Thursday to delay their joint military drills during the Winter Olympics.

North Korea has long denounced the military drills as a war rehearsal and used them as an excuse for its provocations. But the South and the U.S. said that the exercises are defensive in nature.

Next week's talks will be the first inter-Korean dialogue since December 2015.

North Korea sent a document to the South under the name of Ri Son-gwon, the head of the North's state agency in charge of inter-Korean affairs. The receiver is South Korean Unification Minister Cho Myoung-gyon, the ministry said.

After a nine-year rule of two conservative governments, liberal President Moon, who favors engagement with Pyongyang, took office in May last year. But the North's nuclear and missile threats have prompted him to maintain the dual track of seeking sanctions and dialogue.

Seoul hopes that better inter-Korean relations can help pave the way for the resolution of North Korea's nuclear issue and broader talks between the U.S. and North Korea.

Still, some more cynical and skeptical experts said that the North's overture to South Korea may be aimed at weakening the united front in enforcing sanctions on Pyongyang and driving a wedge in the decades-long alliance between Seoul and Washington. Of course, if contrary to all the recent peace talk North Korea surprises everyone and launches an ICBM during the olympics, it would be a strong tell that recent events were only meant to make Trump look bad, well, worse.